I had written about the Ajanta caves in my previous post. This post is about the Ellora caves, an engineering and architectural marvel. You will see this to be one of  the greatest examples of ancient rock –cut monastery and temple caves .

The Ellora Caves are an UNESCO World Heritage Site in the state of Maharashtra in India . They are just 30 kms from the city of Aurangabad . There are more than 100 caves from the 3 religions – Hinduism, Buddhism and Jainism, However only 34 caves are now open for tourists – 12 Buddhist (caves 1–12), 17 Hindu (caves 13–29) and 5 Jain (caves 30–34) caves. The most famous is Cave 16 – the Kailasa Temple, the single largest monolithic carving in the world.

Winter attracts large numbers of foreign tourists to India. However, the best season to visit Ellora is the monsoons. The waterfalls offer a magnificent view.The most notable example is the Dhumar Lena where the gushing natural waterfall symbolizes Ganga flowing out of Shiva’s locks.

The Ellora caves were built between 600 – 1000 CE under the patronage of the Rashtrakuta & the Yadav royal dynasties. The basalt rock was the perfect material and the best location was found in the Charanandri hills . Records show that the work began around 550 AD. Being close to the trade routes , this fine piece of art and architecture wowed through centuries.

The Buddhist caves were the earliest . They were constructed between 500 and 750 AD. All the Buddhist caves except Cave 10 are Viharas or monasteries. They are huge multi storied structures with living and sleeping quarters for the monks with kitchens and even larger prayer halls

This is a Vihara with a central hall supported by 12 pillars.  Padmapani or Avalokitesvara (Bodhisattva holding a lotus) flanks one side of the doorway while the other has the Maitreya (future Buddha). The sculpture of Buddha seated on his throne greets you at the entrance.

You will see the two finest carvings of Ellora in this cave – Tara (the female Bodhisattva) and Mahamayuri (goddess of learning) with the peacock.

This cave is a grand worship hall and also known as Sutar Jhopadi (Carpenter’s Cave). The beams on the ceiling look like they have been made of wood instead of rock, hence the name. Beyond this is the Chaitya with a stupa adorned with a 15-ft statue of Buddha in Vyakhyana Mudra (preaching position) with the backdrop of the Bodhi tree. There are small cells on either side of the pillars. Bas relief of Apsaras (celestials nymphs), musicians, Nagas and other deities like Maitreya, Tara, Avalokitesvara, Bhrukuti and Mahamayuri adorn the entire cave.

This cave has 2 Floors. Hence the name. In 1876, a basement level was unearthed thus making this cave to have 3 floors. This is a Mahayana monastery with Buddhist Mandalas and Bodhisattvas. There are some images of Durga & Ganesh also indicating that it was later converted to a Hindu temple after the cave was abandoned by Buddhists.

This cave is has 3 Floors and hence the name. It also has a striking hall with 5 Bodhisattvas and several Buddha statues along with several goddesses related to Vajrayana and Tantra ideas of Buddhism 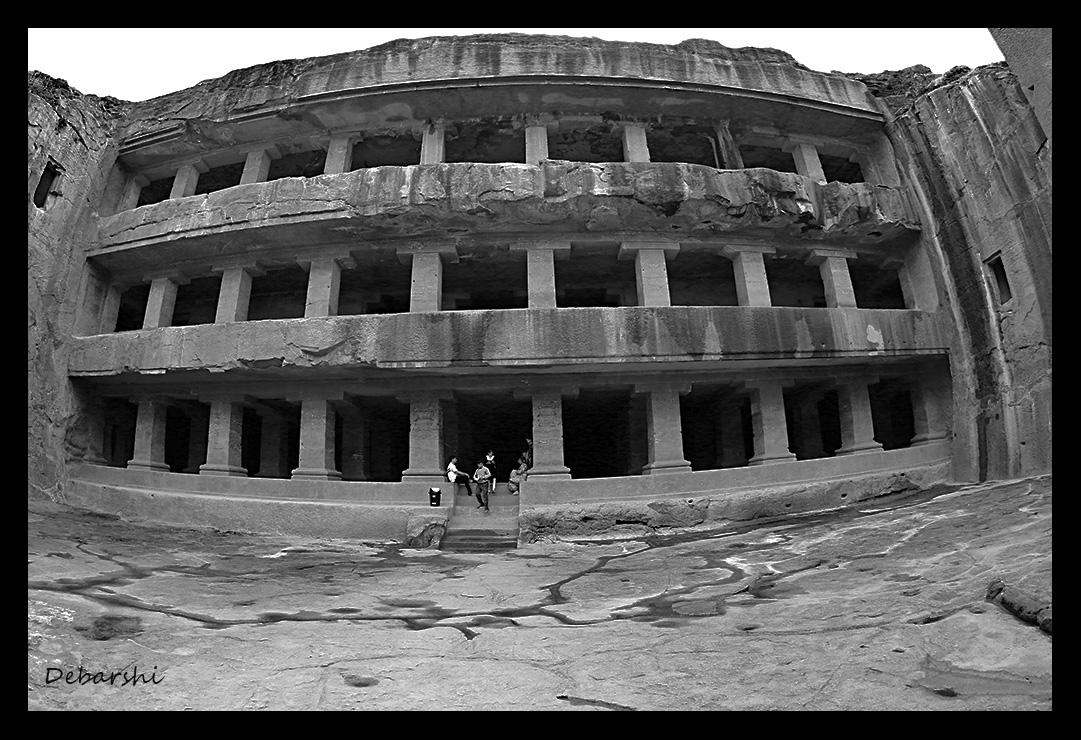 There are 17 caves and they were all built between 600 and 870 AD. The most spectacular is the cave 16 , the famous Kailasa Temple. Bas-reliefs from the Hindu scriptures adorn all the cave walls . The Hindu Caves venerate Lord Shiva, as well as other gods and goddesses as well.

A Buddhist Vihara originally . Superb friezes(stone carvings) of Ganga and Yamuna – the river goddesses and the SaptaMatrikas – the fertility goddesses adorn the walls . You will also see the female Ganesha.

The panels with Vishnu’s incarnations or avatars embellish this Cave . Hence the name. The cave has two floors and this also was a Buddhist Vihara. The open hall with a monolithic mandapa, flawless sculptures of Shiva rising from a linga and Brahma and Vishnu in prayer and also the famous sculpture  of Nataraja, the Celestial Dancer

Ellora caves Kailash Temple is an exquisite temple . Skilled engineers and artisans started sculpting this temple from the top down. The Kailash Temple actually represents Mount Kailash, the abode of Lord Shiva. It is said to have been coated with a white plaster to resemble the snowy Mount Kailash. 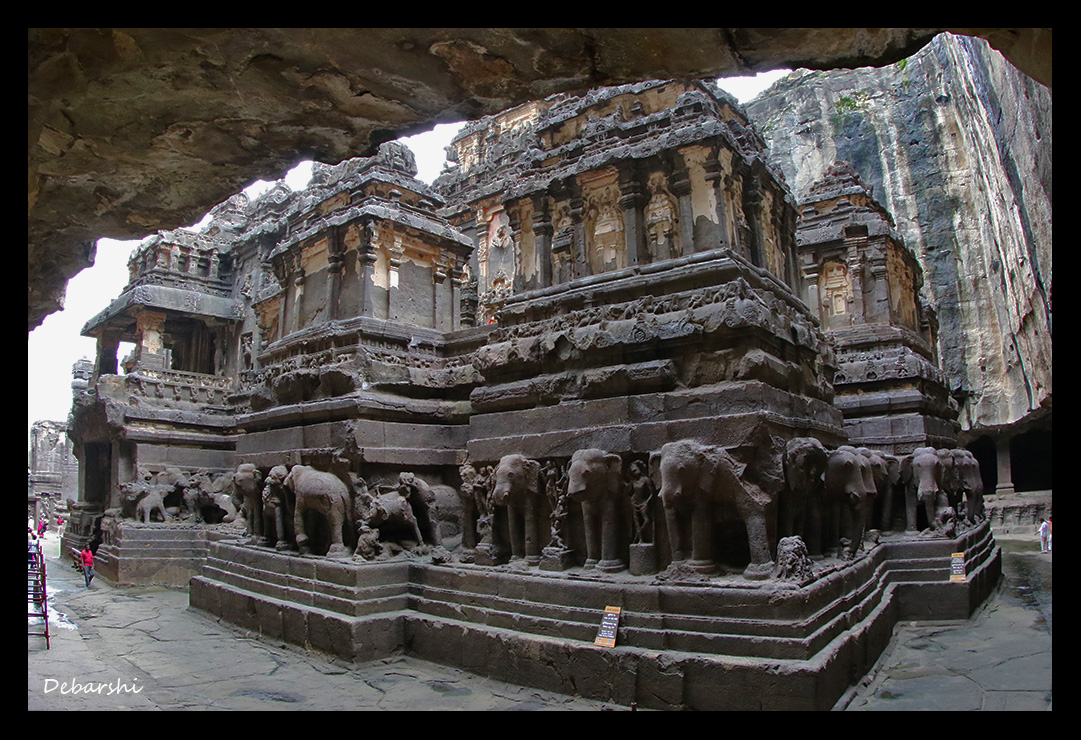 This piece of architecture is nothing short of human genius. A single rock was used to sculpt this free standing structure with multiple stories. Artisans sculpted and removed about 250,000 tons of rock taking 100 years to complete . The Kailash Temple is almost twice the size of Parthenon. It is the world’s largest monolithic sculpture and goes up to 36 meters high. The temple is about 84 m high. Originally brightly coloured , but today, there is none left. 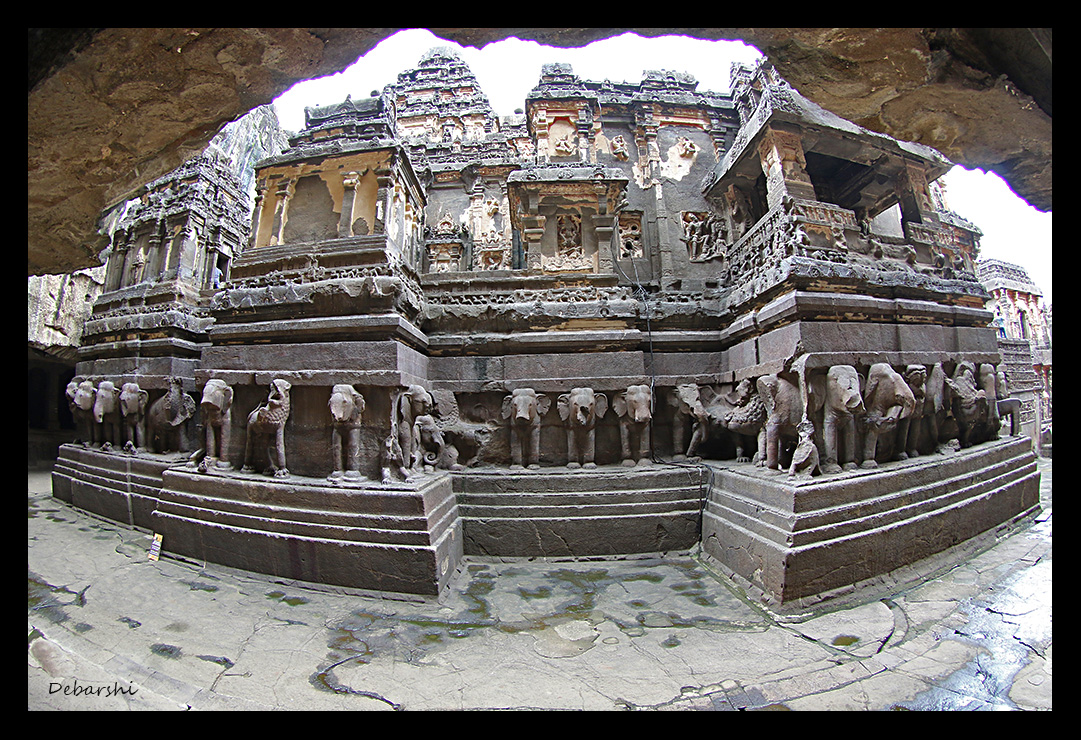 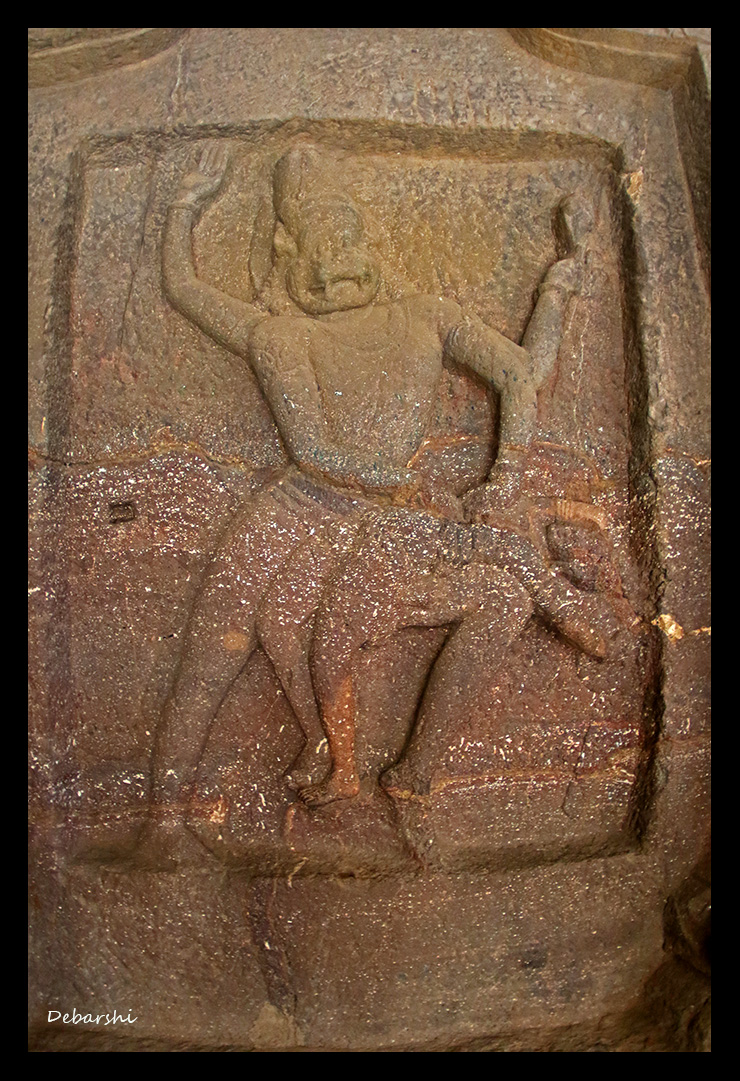 There is a large gopuram or gate to enter the temple premises. As soon as you enter, there is a courtyard with triple storied columned galleries and several buildings all carved out from the original rock. Just after the gopuram are the Dhvajastambhas and the shrine to Nandi. You can see the imposing Mandapa right after that . Life-sized elephants (carved from the original rock) hold up the main shrine of Kailash Temple standing on 16 pillars . The main structure of the temple is in the courtyard and is about 7 meters high. It is in the shape of a pyramid with a massive stone linga. The temple halls are adorned with extensive panels of carvings featuring scenes from the Hindu epics – Mahabharata and Ramayana. 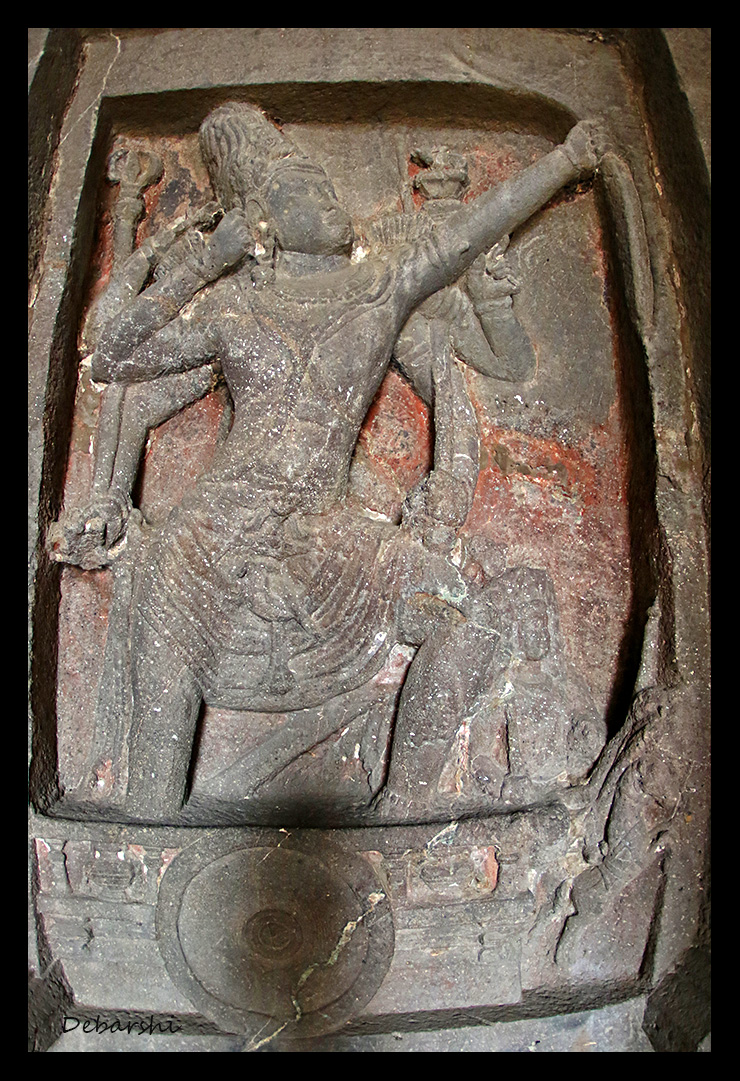 The artisans constructed this temple in the process of vertical excavation—carving from the top & excavating downwards. 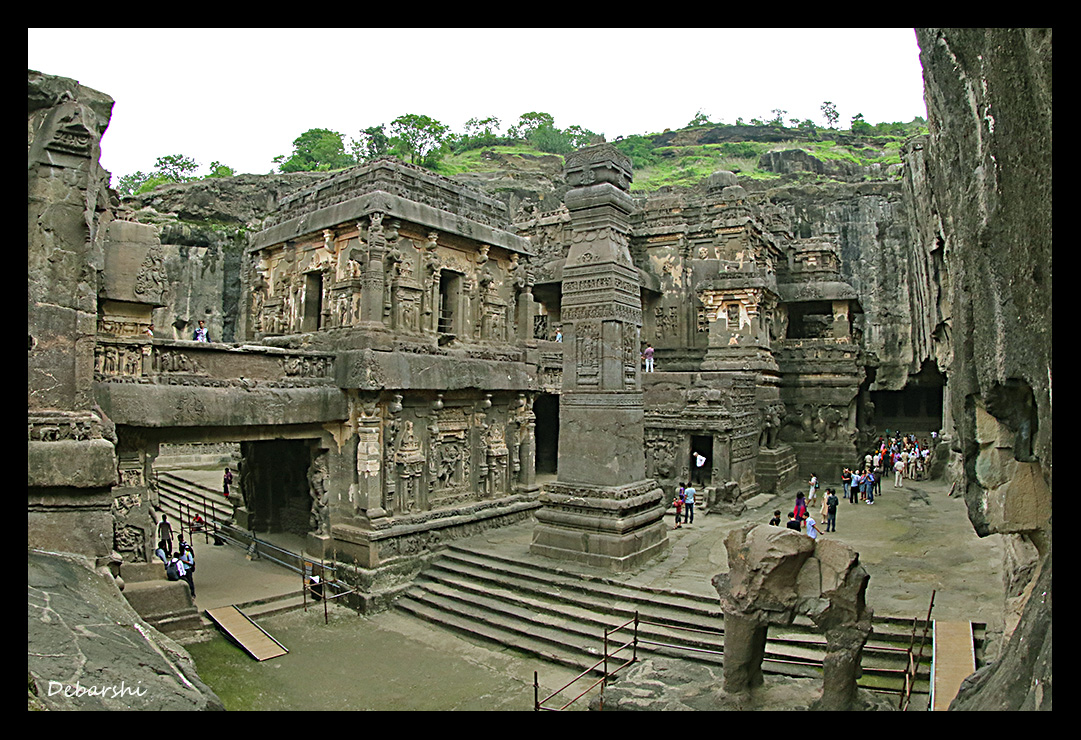 This is probably the oldest cave in Ellora. The sculptures of Ganga, Yamuna and the Mithuns (Couples in Love) are really a must see.

There is an exquisite sculpture of the sun god – Surya driving his chariot.

You have to take the bus or walk down the tarred pathway to reach this beautiful cave and the landscape. There is a large waterfall, plunging into the gorge in monsoon. This cave is planned in the shape of a cross and has massive friezes of Shiva & Parvati adorning the walls. The sculptures include Shiva slaying demons or Shiva in a playful mood with Parvati. Don’t miss the sculpture of a dwarf exposing his bottom! 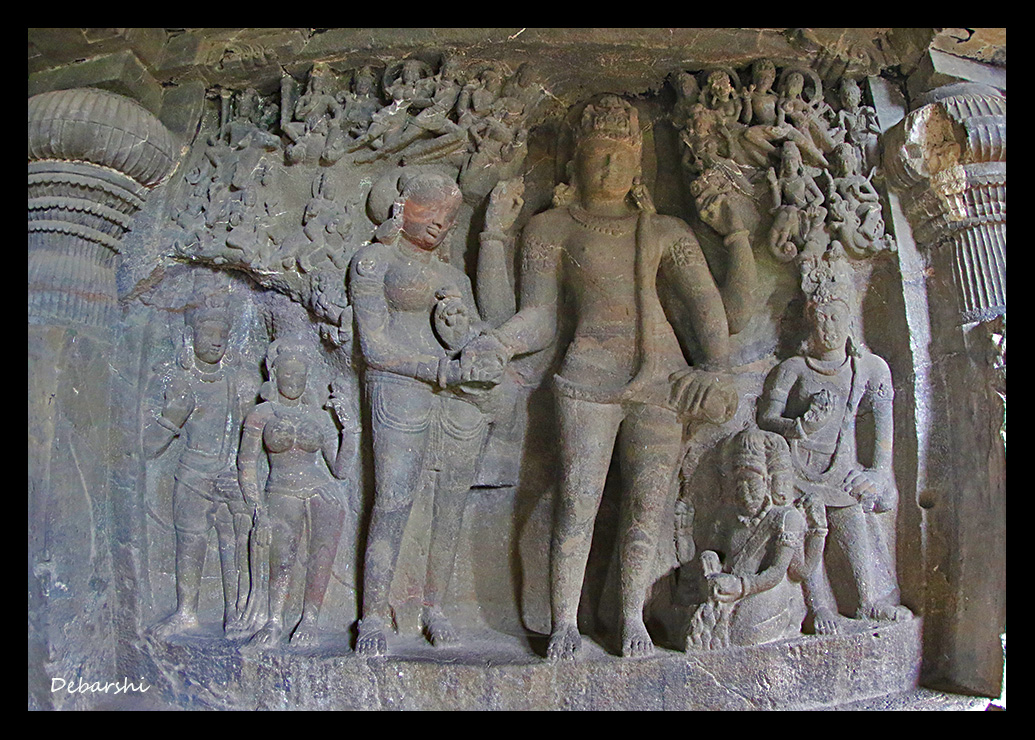 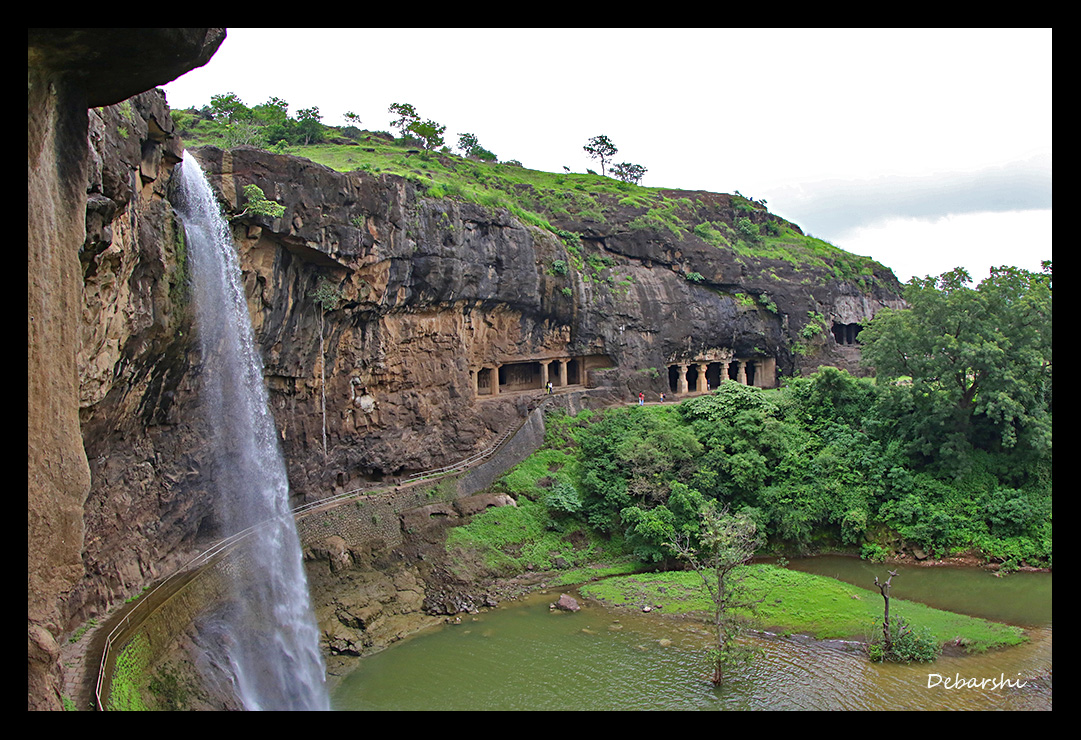 There are 5 Jain Caves belonging to the Digambara Sect of Jainism and are 2kms down an asphalt road. Buses and rickshaws are available in case you don’t want to walk. These caves were carved in the ninth and early tenth centuries. The sculptures depict the 24 Jinas (liberated from the cycle of rebirths)  and Male and Female Nature Gods . 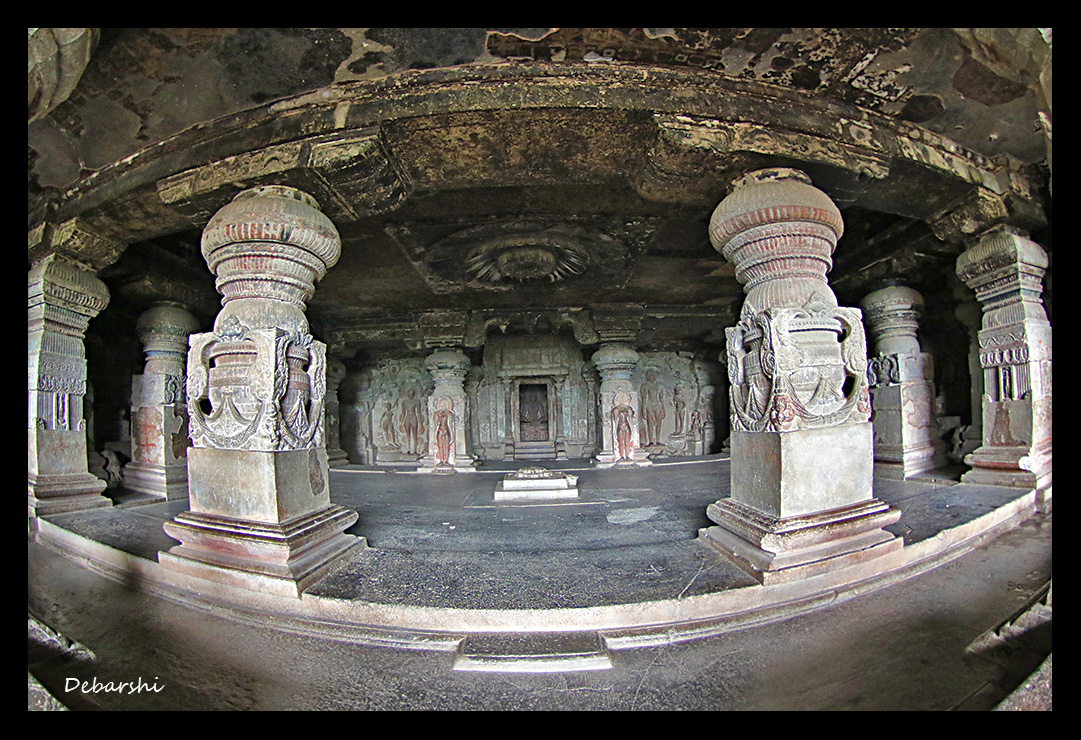 The carvings here resemble the Cave 16 or Kailasa Temple hence the name. There are two larger-than-life bas reliefs of dancing Indra with multiple arms in various mudras (dancing postures) like Shiva . There are also other celestial musicians and dancers. This is an unfinished cave. 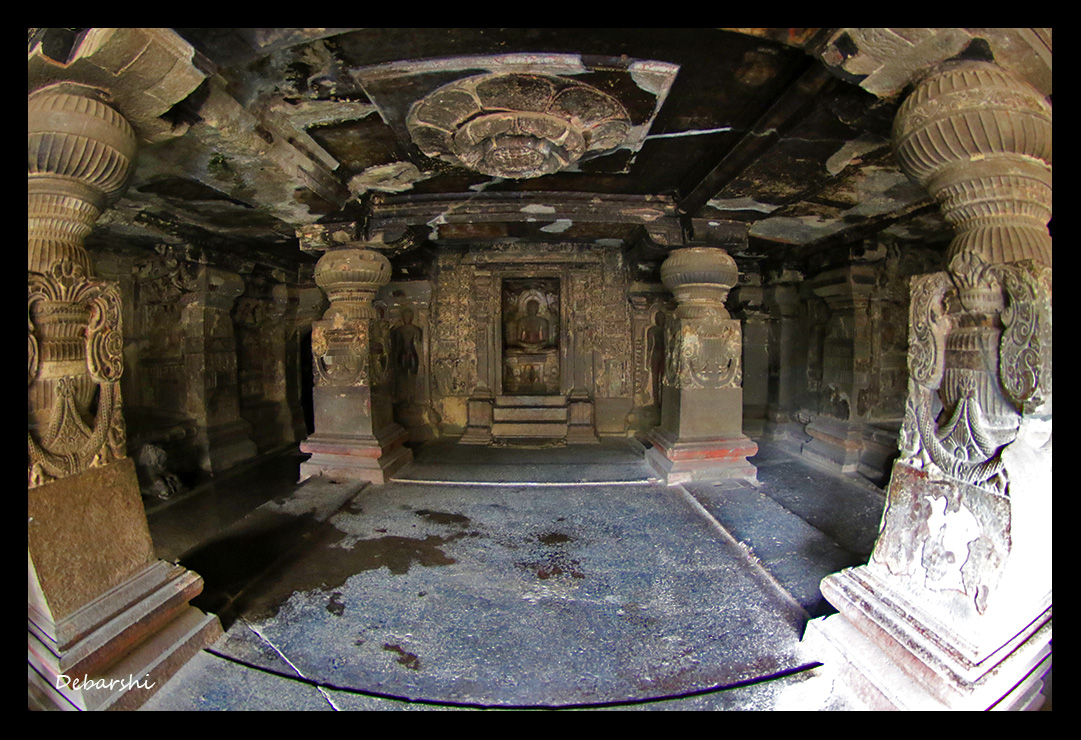 This is also an unfinished cave with 4 pillars and a shrine. There is a notable sculpture of Parshvanatha guarded by a Yaksha with his 7 hoods. The shrine has a sculpture of Vardhamana Mahavir on a throne with Yakshas on either side seated on an elephant and lion.

The Yakshas sculptures in cave was misunderstood by historians to be Indra. This is a 2 floor cave. There is a monolithic shrine in the centre. Jains have been worshipping the carvings and the idol in this temple.The carvings are really intricate like the naked Gomateshwara meditating in the standing position in a dense jungle with vines having grown around his legs and crawling scorpions and snakes. There is a sculpture of Ambika seated on a lion under a mango tree on the upper level. There are also 4 Tirthankaras of Jainism – Rshibha, Neminatha, Parsvanatha and Mahavira (24th) facing each of the 4 directions.

This is a 2 floor cave with 12 pillars with elephant heads all carved out of a single rock. The sculptures of Parshvanatha  and Mahavira are present in the inner square hall carved with fluted shafts and ridges.