The Ajanta caves near Aurangabad are some of the best preserved ancient frescoes by Buddhist Monks from the 2nd century BC. They are situated in the western state of Maharashtra in India and easily accessible through the Aurangabad airport.History is one of our passions and features in choice of vacation spots. The Ajanta and Ellora caves and Daulatabad Fort have been on our mind for years ; we put it to fruition in August 2016 with a long weekend.

Aurangabad is connected from Mumbai via 2 nonstop flights by Air India – evening flight and Jet Airways – morning and evening flight. The Aurangabad airport has been renovated into one of those modern steel and glass structures.

The caves are open all year round and involve a great deal of walking. There are ramps for wheelchair accessibility. Tourists prefer winter (November to March) for a visit to the Ajanta caves in Aurangabad.

Where to Stay in Aurangabad

We stayed at the Vivanta by Taj, the best star property in the city. The other well rated properties are WelcomHotel Rama International, Lemon Tree and Keys Hotel.

The hotel is styled like a palace, with rooms on two floors .The ground floor has the banquet halls, the restaurants all day dining – Latitude, Chinese – The Tea House  with the in-house Spa – Jiva. The service is impeccable and the staff personally care for each of the guests. Like: the housekeeping staff left a velvet hand embroidered book mark on the book I had left on my nightstand. 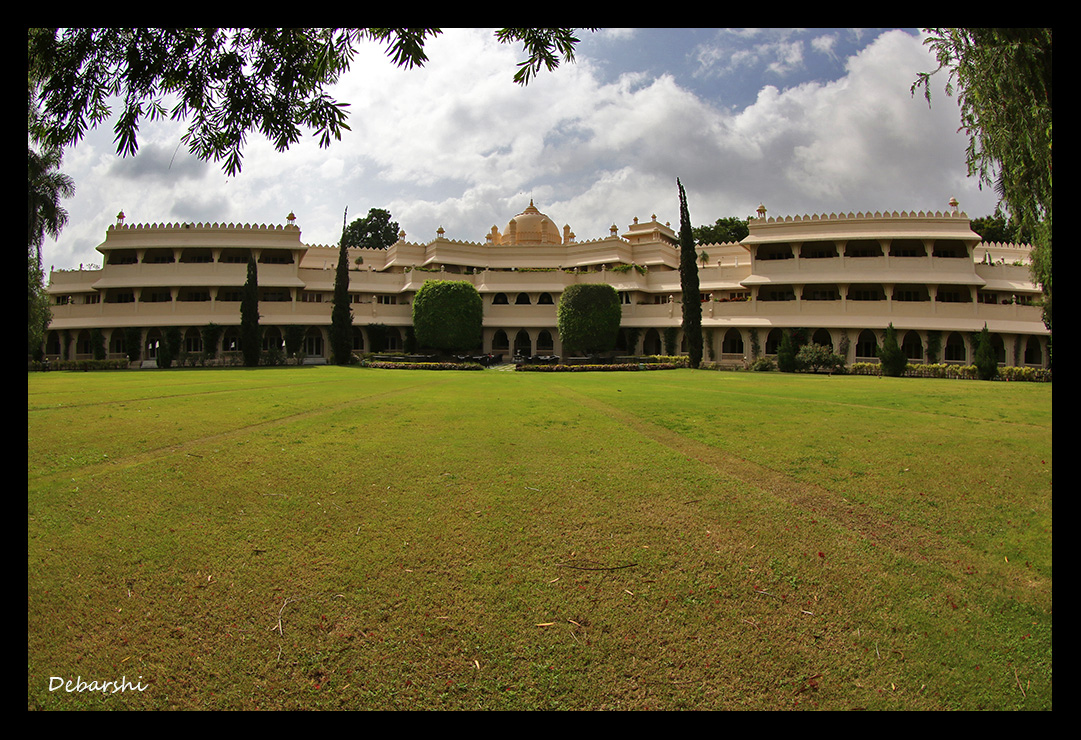 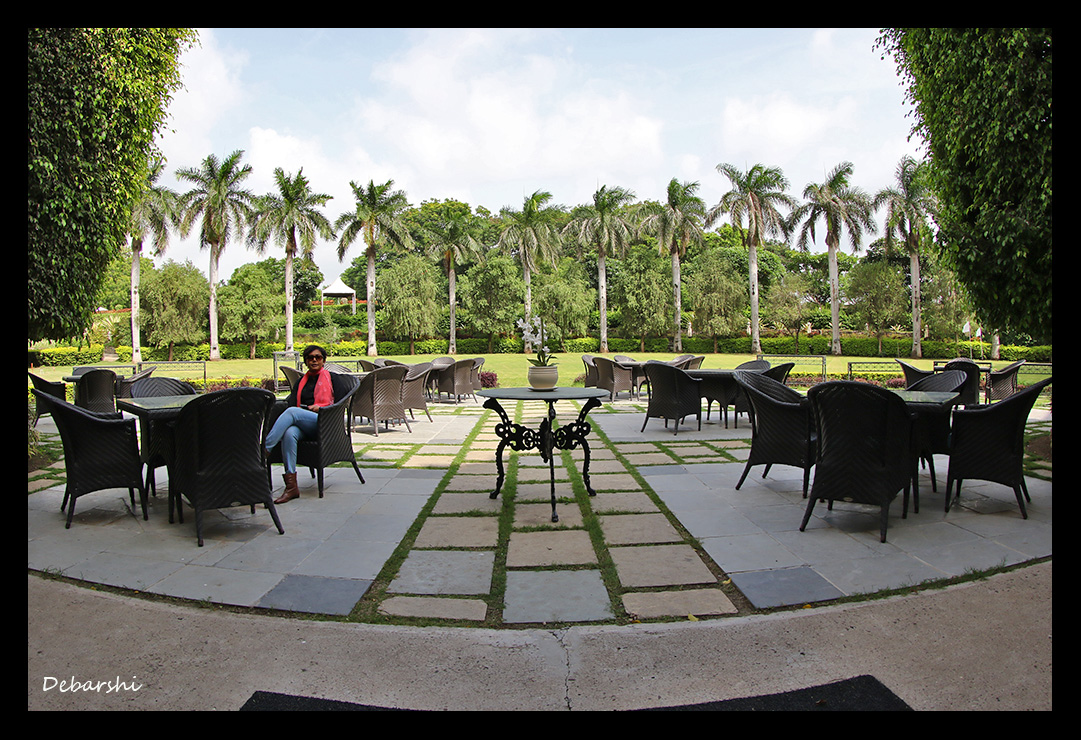 A few factors to keep in mind:

The Ajanta caves are about 90 km from the city of Aurangabad and take roughly 2 hours to reach. The State Highway is undivided and traffic increases as the day goes. The parking lot is quite a distance from the actual caves entrance and you can use the complimentary Bus service by Maharashtra Tourism to reach the gate. There are a large number of curio shops lining the path from the bus stop to the ticket counter . 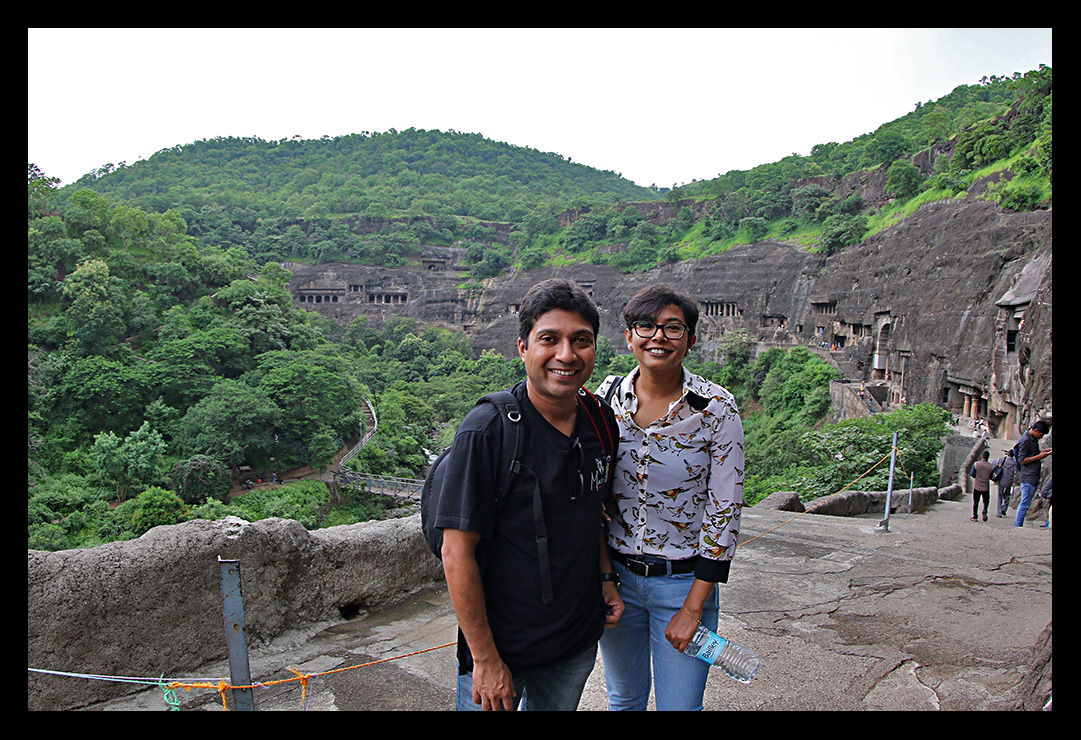 Ajanta Caves as our backdrop 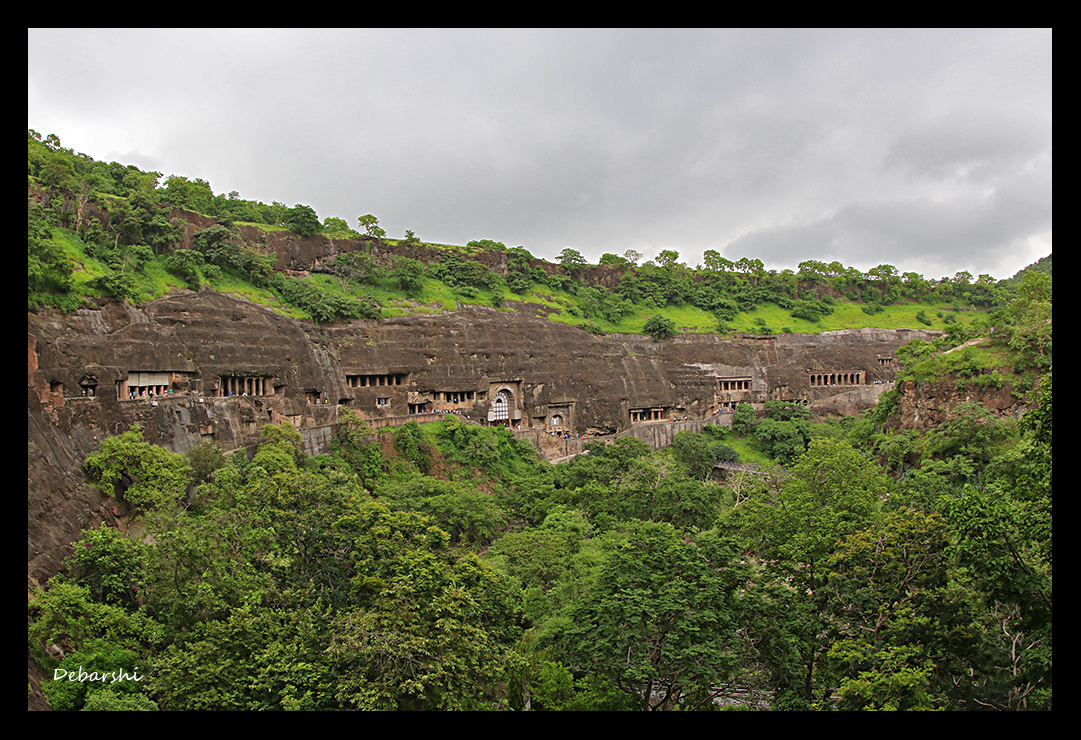 History of the Ajanta Caves

The 29 rock cut caves were sculpted out from a horse shaped cliff by Buddhist monks. Studies show one group of caves were built around the 2nd century BC, while the other was probably built around 400–650 CE. The purpose of the caves was to either be a prayer hall (Chaitya Griha) or a monastery (Vihara). One could access the caves from the river in ancient times. The caves served as the refuge for the monks during the monsoons and they created Buddhist masterpieces painting colourful murals portraying the lives of Buddha and various Bodhisattvas (past lives). The paintings are either in the Theravada or the Mahayana Traditions.

A British Officer, John Smith rediscovered the Ajanta Caves in 1819 . Although the nearby villagers knew about this place earlier and revered the site. He found the entrance to Cave 10 while hunting for tigers.

I would recommend visiting the Caves in reverse order to avoid the visitors rush although we did not do that. The caves are numbered east to west, 1 to 29 and connected by a stone walk way . This is accessible also for visitors on wheel chairs. You can also walk to the opposite side of the river and get a panorama view of the entire vista. Caves 1, 2, 16 & 17 are the most spectacular examples of ancient Indian frescoes.

Vajrapani and Padmapani, the two famous bodhisattvas flank the both sides of the doorway. Vajrapani holds a thunderbolt or Vajra while Padmapani holds a water lily or Padma. The walls show incidents from Buddha’s life like Sravasti, where he proliferated into thousand images and murals from Jataka Tales. You can also see the 3 signs (a sick man, an old man, and a corpse) which prompted Buddha to renounce the world. The inner sanctum houses an enormous Buddha sculpture in the preaching position. The cave has one of the most elaborately carved facades and frescoes some even with foreign dresses which shows the presence of foreign traders from other lands. 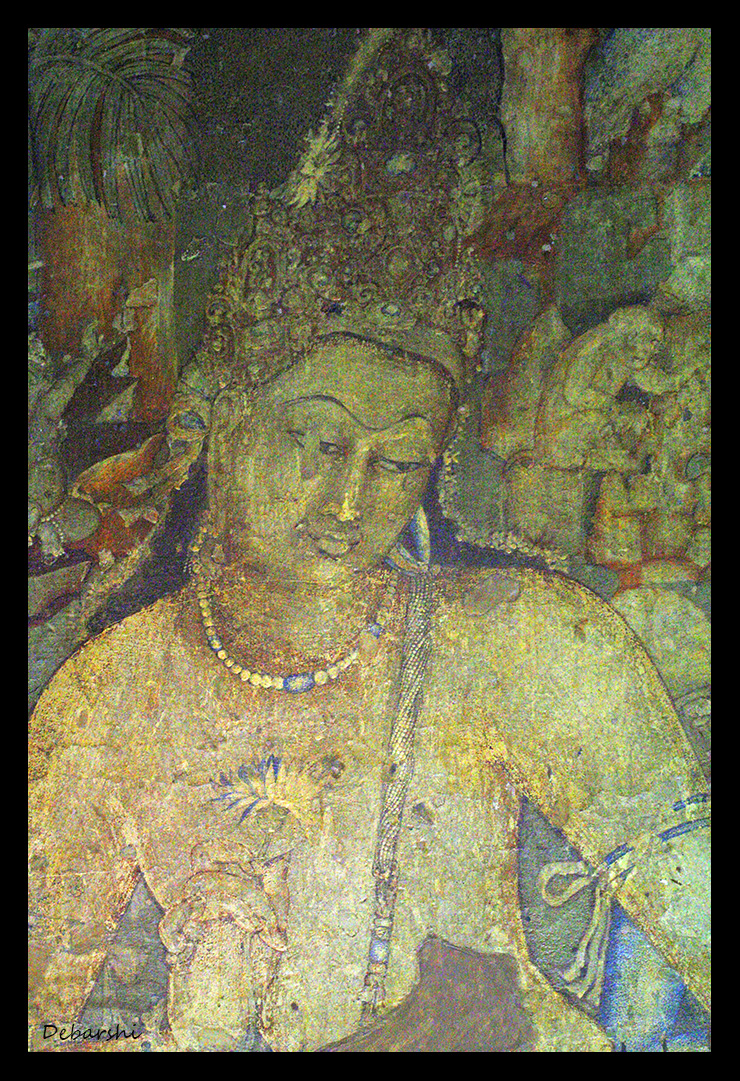 Also a Mahayana monastery, the highlight is the Mandala in the ceiling like a cloth canopy. The hall has four colonnades with rock beams supporting them and carved with ornamental and divine motifs. The frescoes here as well depict the Jataka tales from Buddha’s previous births. 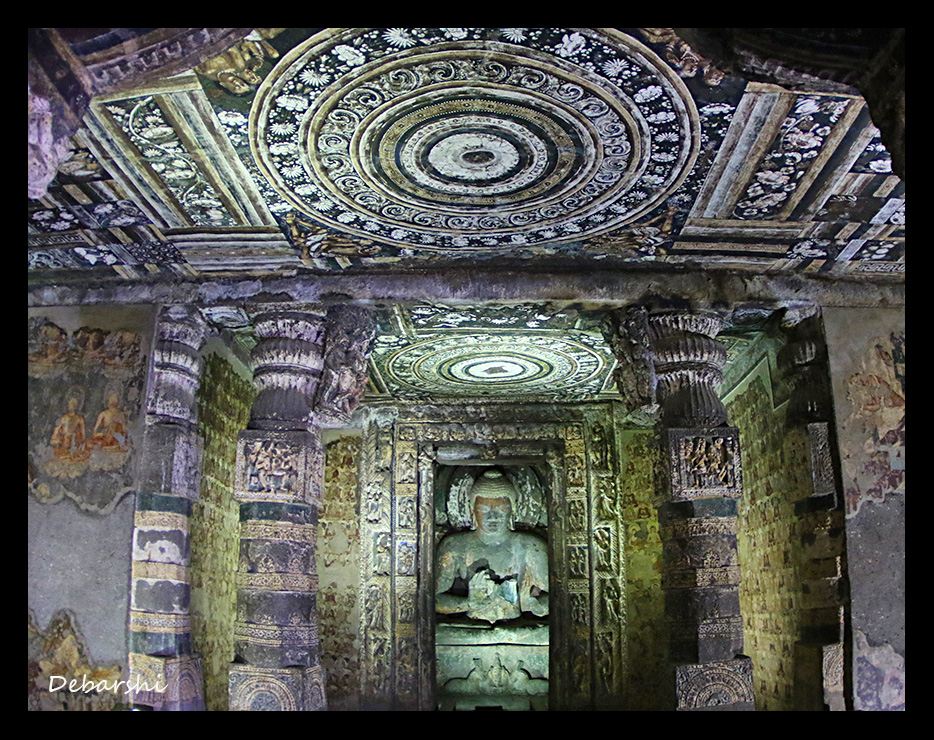 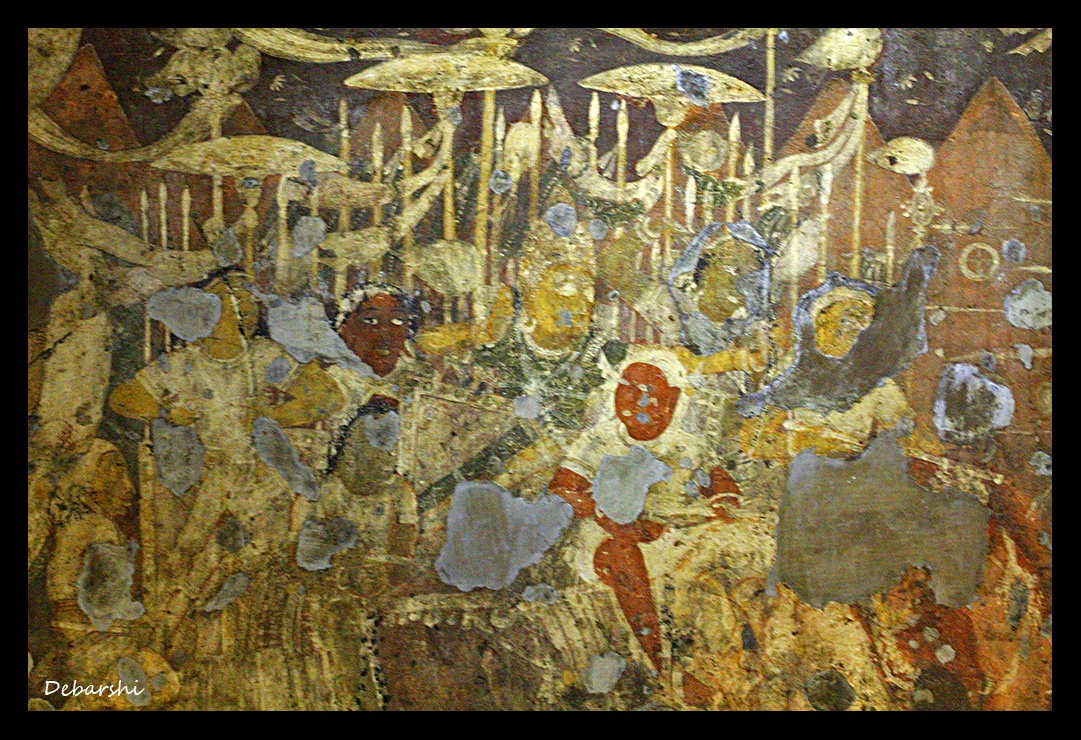 Planned as the grandest monastery . But remains incomplete as of date. You should see the huge Buddha in preaching position with the hovering celestial nymphs and the panel in the porch with Avalokitesvara. 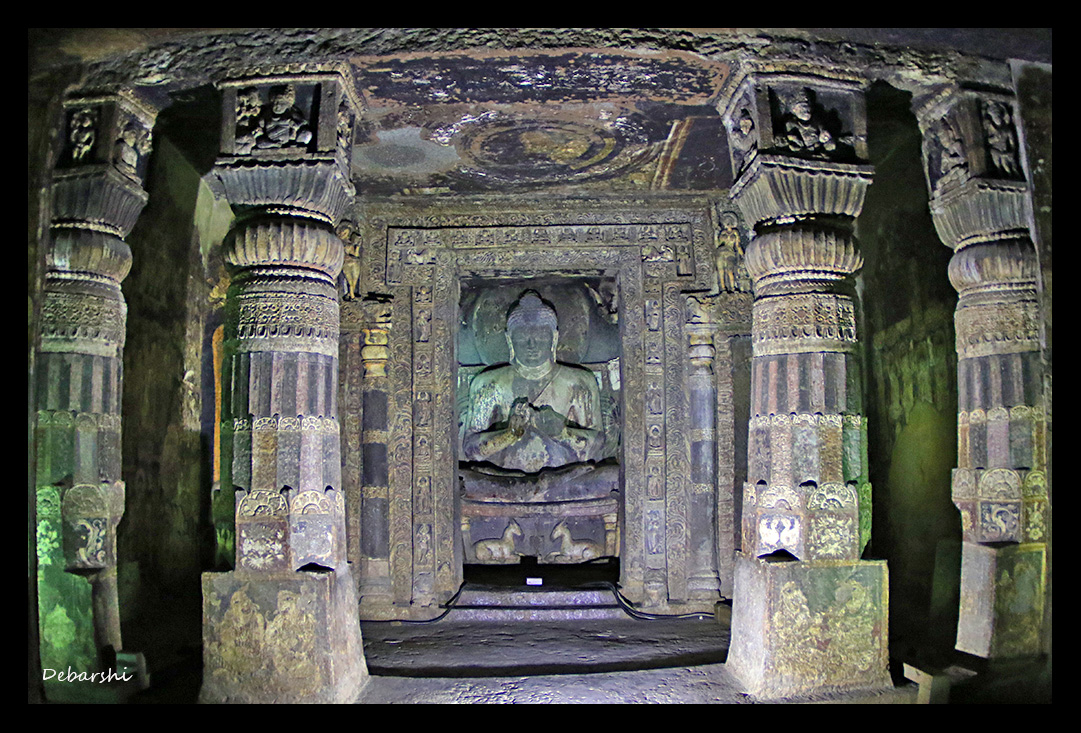 These are Theravada caves . Here , a throne or footprints or in this case the large Stupa symbolises Buddha . Both the caves served as Chaityas with large arched windows to illuminate the caves with mellow sunlight. 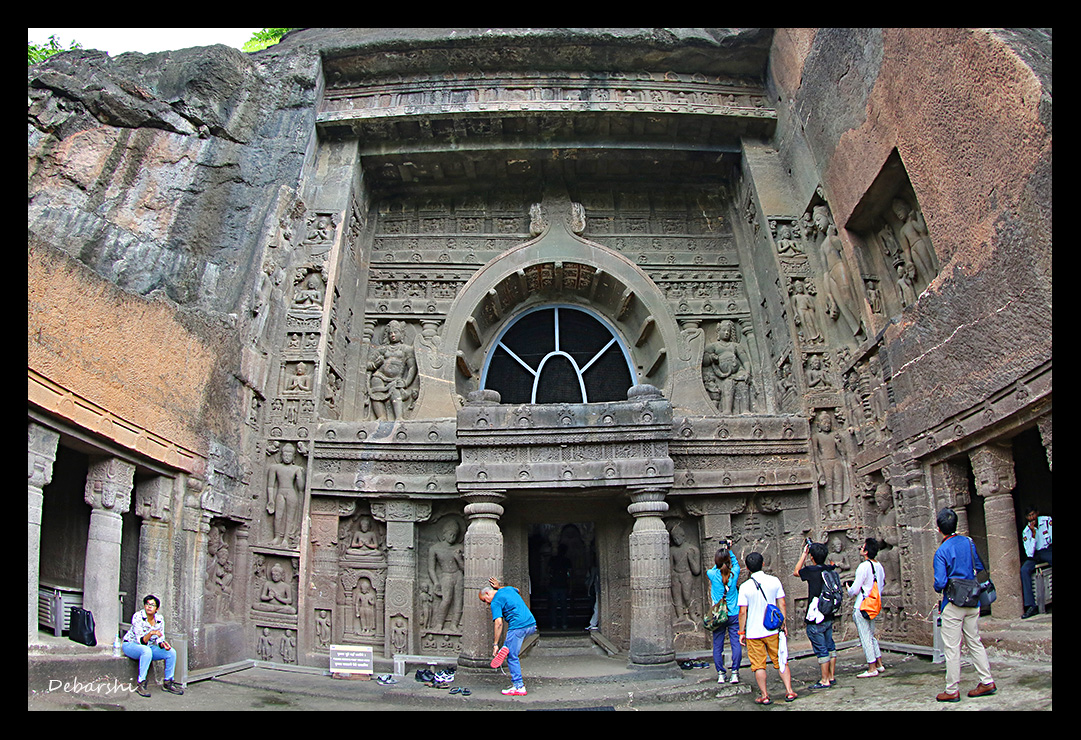 Adorned with stone elephants in the doorway, noteworthy is the fresco of the princess Sundari passing out on hearing her husband renouncing the world to become a monk.

This cave has the best preserved frescoes along with an elaborate Vihara design. The features show a colonnaded porch, individually designed pillars. The monks designed large windows for better illumination.

The frescoes depict the various Jataka Tales or Buddha in previous births like Avalokitesvara, Visvantara Jataka, Hamsa Jataka, Maitreya (future Buddha) and Manushi Buddhas (In Human Form). There are also maidens, lovers, celestial musicians, Indra with his apsaras (nymphs). But the most noteworthy was the fresco portraying the adventures of Prince Simhala’s voyage to Sri Lanka, where he had a ship wreck, encountered the man-eating ogresses and his valiant escape on a flying horse.

This is a large Chaitya with a statue of the reclining Buddha signifying his death and a stupa. There are also his mourning followers and rejoicing heavenly beings. 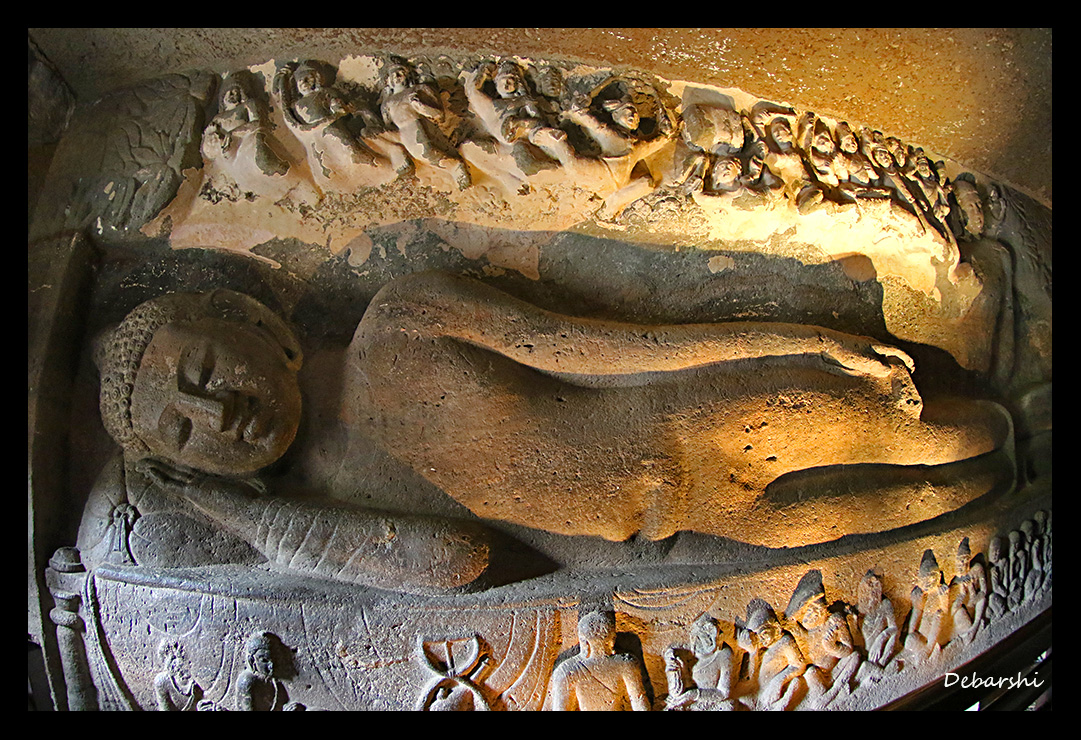 We had visited Sri Lanka and the Sigiriya rock some years back, thus noticing a similarity to the paintings . (King Kasyapa had built the palace and the water gardens in Sigiriya during the 5th century).

After the entire sightseeing, we were ravenous. Maharashtra Tourism runs a fairly good restaurant near the ticket counter. This place serves Indian and Oriental cuisines (lot of tourists from the Far East).Maharashtra Tourism also operates a tourist resort here. There are numerous tourists from the Far East who visit Ajanta caves considering their Buddhist influence.

I will write about the Ellora Caves in my next post. 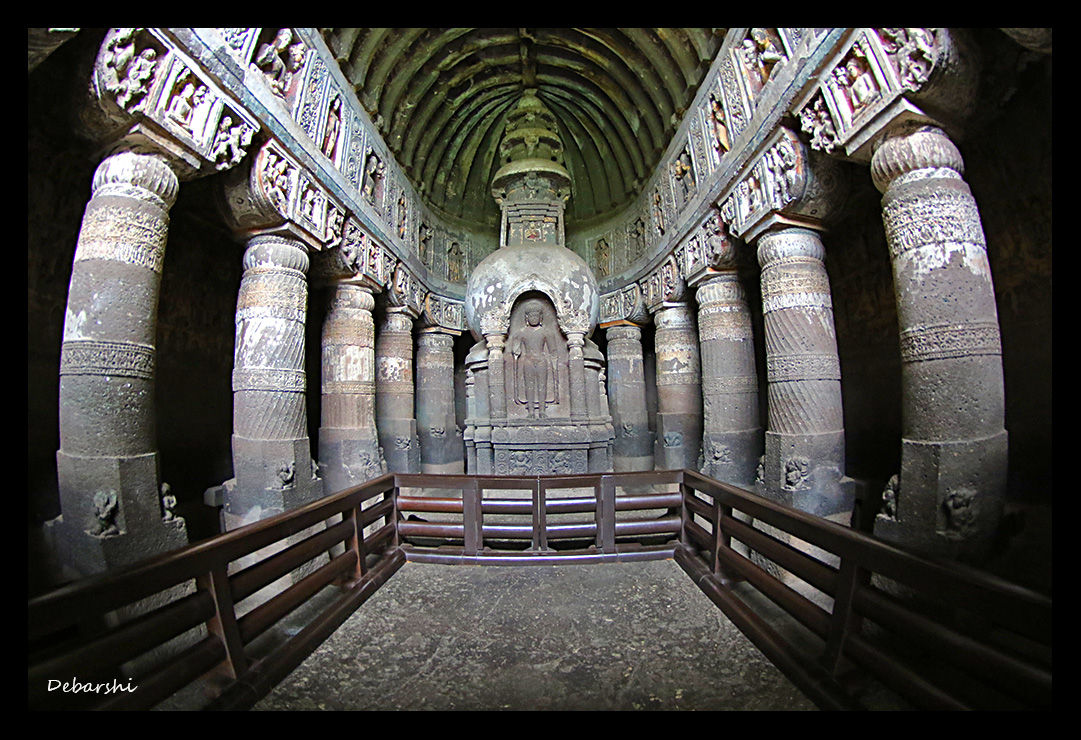