The influence of Aurangzeb in Aurangabad is still prevalent through the famed Paithani sarees. And of course , the Daulatabad Fort and Bibi Ka Maqbara are a must visit when you are in Aurangabad .

The Daulatabad Fort is midway between Aurangabad and Ellora caves in the erstwhile city of Devagiri. It was first built by Yadav king Bhillama in 1187 and then fortifications added by Muhammad bin Tughlaq, Hasan Bahmani & Aurangzeb. 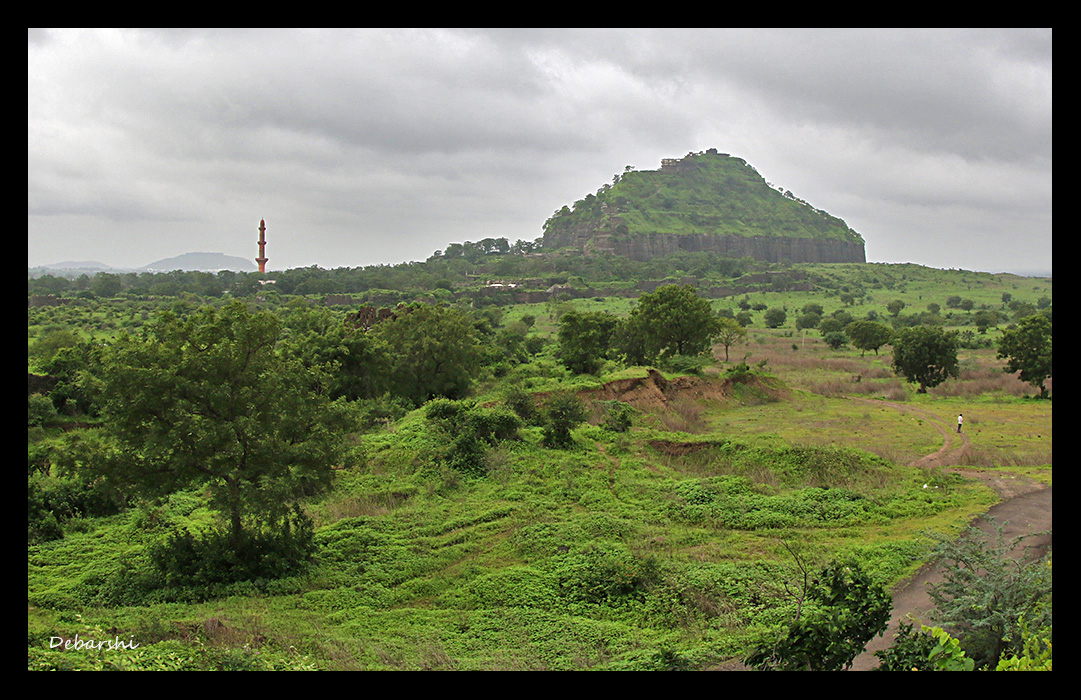 Daulatabad Fort was one of the most powerful forts in the medieval period of Indian history.

There is a narrow entrance followed by along gallery of rock pathways in a gradual upward gradient. There are also huge old cannons and lofty walls. Then comes a tall and high passage with openings for artillery and a guard rest spot. The outer door is still intact with the metallic spikes and is secured with a heavy wooden bar .

The Gateway in the Second Wall

The turrets and a secured parapet along with sentry recesses on either side guarded this part. There is a covered porch leading to another large tower with its upper part missing. This then leads to another narrower single two leaved-door. There are many building s mow in ruin which can be seen – like temples, mosques, shops.

Another notable feature is the Chand Minar (Tower of the Moon)built by Sultan Ala-ud-din Bahmani. It is a noticeable minaret about 64 metres high and 21 metres in circumference and was previously covered with beautiful Persian glazed tiles. This minar was erected by Ala-ud-din Bahmani to commemorate his conquest of the Daulatabad fort. But it is not open for tourists due to a previous suicide case. 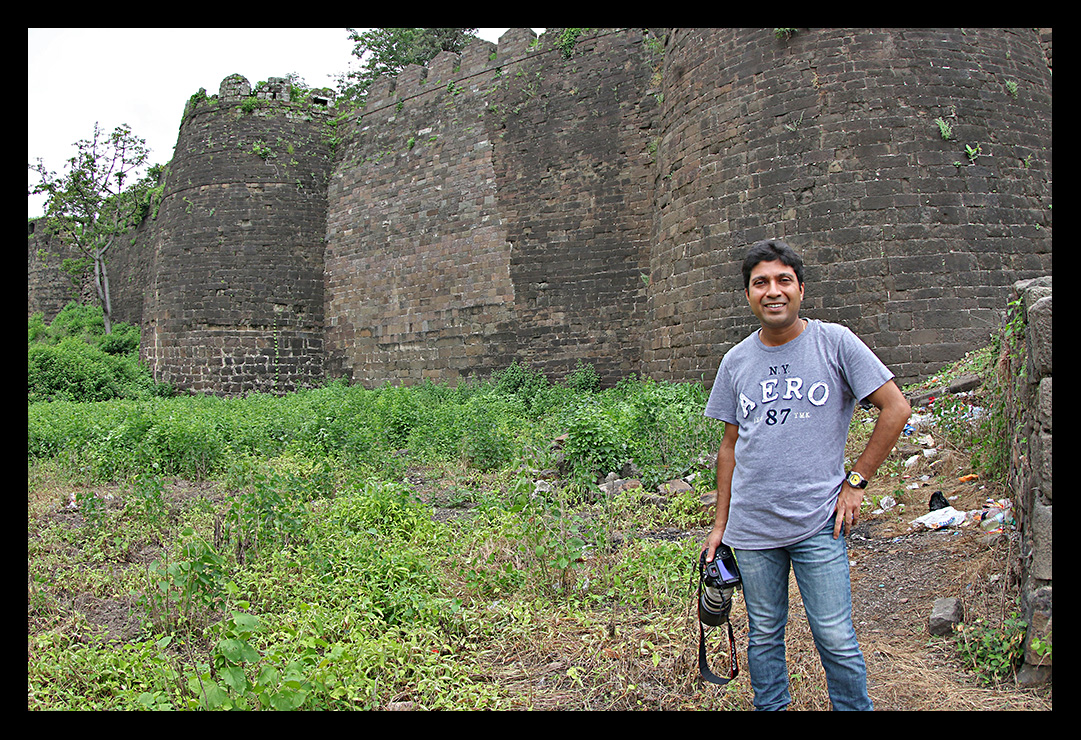 This is much further up the hill and also defended by turrets on either sides. There is a steep flight of stairs and the top is covered by a grating which was lit up as a hearth of a huge fire during war. Then comes the Chini Mahal (China Palace). It was a beautiful construction but was used as prison by Aurangzeb.

Beside the Chini Mahal is a enormous cannon places during Aurangzeb’s rule also known as the ‘Menda Top’. The second superb and heavy canon of the 18th century in its original mount at the summit.

This entrance to the Citadel is guarded by a deep moat which was filled with crocodiles. There are numerous flights of steep stairs leading to a small open court with a doorway to the tunnel. 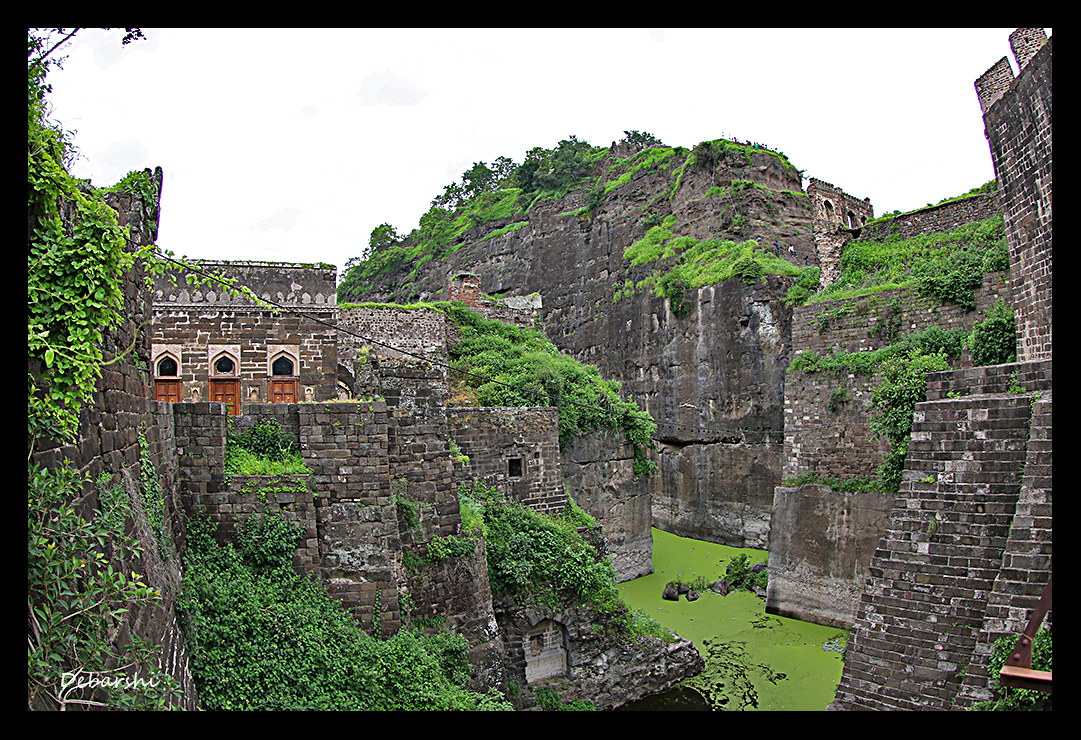 The Moat surrounding the Daulatabad Fort

The tunnel is quite dark long and ascends by an almost vertical flight of stairs. This is punctuated at times by tiny recesses for sentries and then reaches an iron trap door on wheels.

Once you exit from the tunnel, there is a sense of freedom. But again a series of steps takes you to the summer house built for Shahjahan in 1636.

This historical triangular fort of is truly a place of exceptional strength is a thriving tourist hot spot and considered to be one of the seven wonders of Maharashtra . 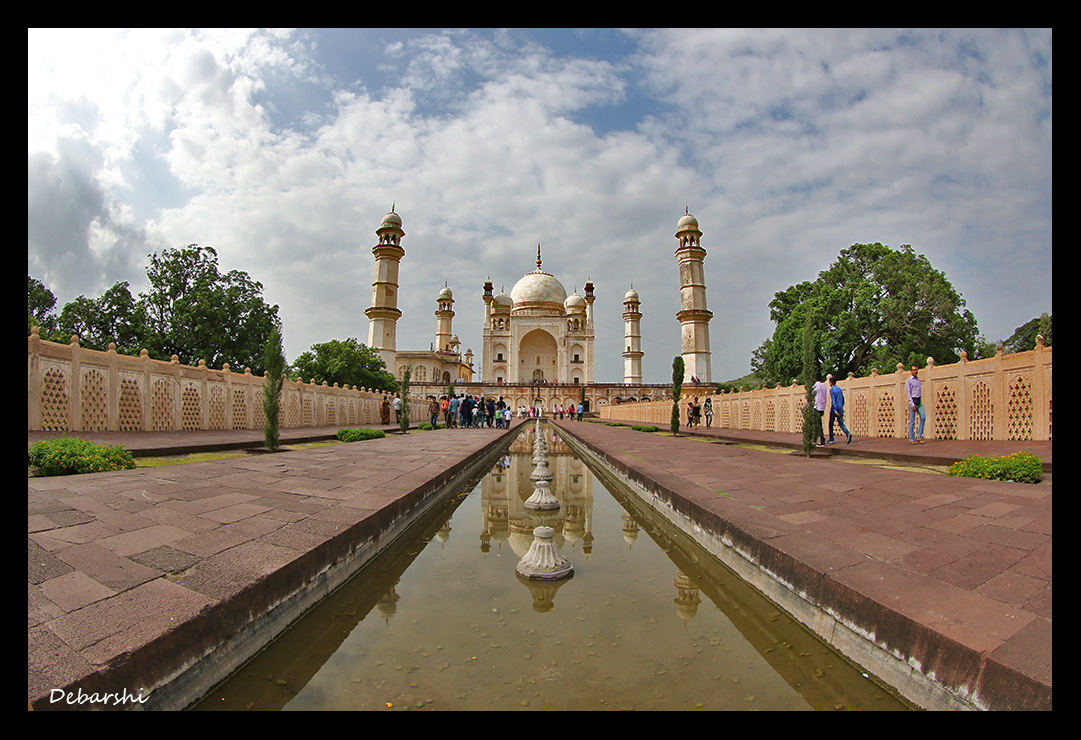 This monument is located in Aurangabad and translates to the Tomb of the Lady and bears a prominent similarity to the Taj Mahal (a monument of love built by Shah Jahan in memory of his late wife, Mumtaz).

Historians believe that Prince Azam Shah, Aurangzeb’s son erected this mausoleum in memory of his mother, Dilras Banu Begum (also known as Rabia-ud-Daurani) between 1651 and 1661 A.D.

The mausoleum is in symmetrically laid out gardens in the Mughal style known as Charbagh,. It is in the centre of a vast enclosure with pillared pavilions in the north, east & south. The enclosure wall is very high and has sentry recesses at regular intervals crowned with minarets.

A flight of stairs takes you to the square platform from 3 sides. The main entrance is on the south with floral designs on brass and wood. The pathway has several water fountains very typical of Mughal architecture.

The monument is sheathed with marble to a level followed by polished decorated basaltic trap and then the marble dome. 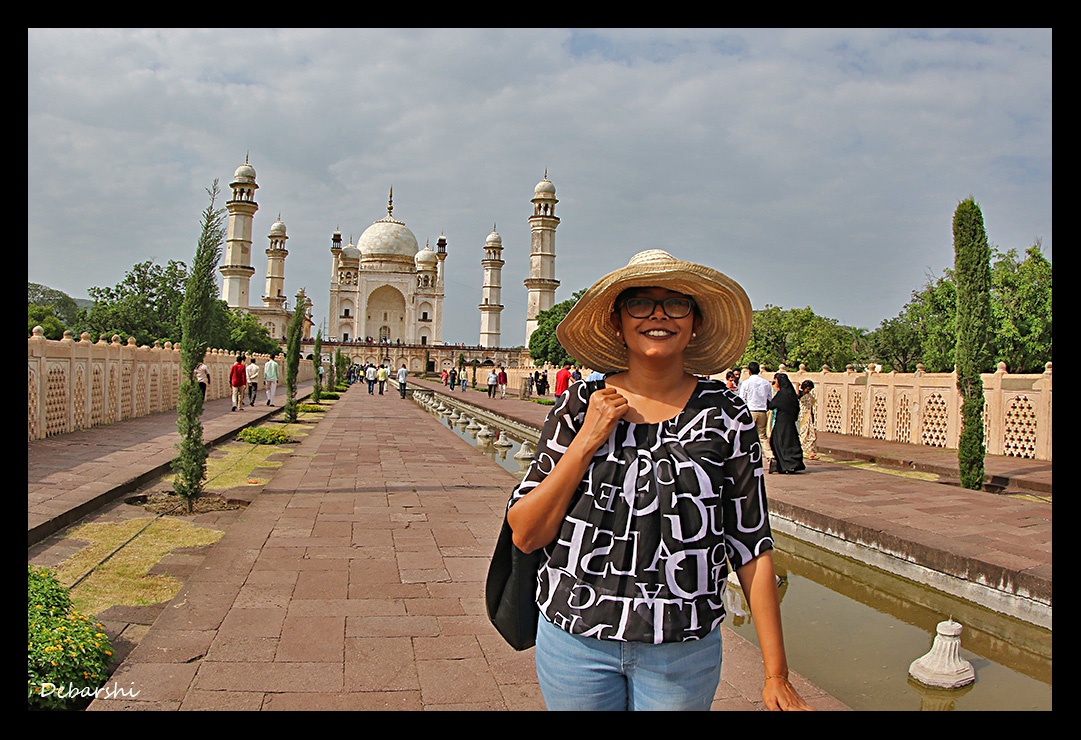 Chandrima in the gardens of Bibi ka Maqbara

The tomb is below the ground and enclosed by an octagonal designed marble screen .The roof of the mortuary chamber is aligned to the ground level of the mausoleum. A lattice worked dome with ornate floral designs adorns the tomb. 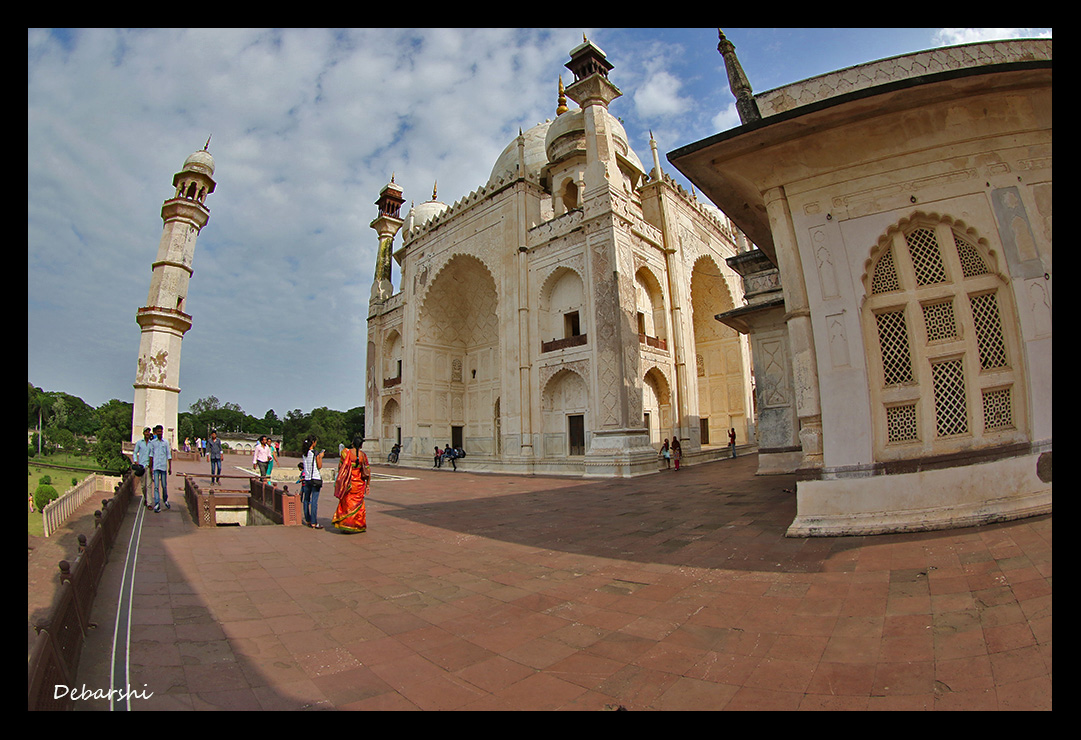 The Nizam of Hyderabad later on added a mosque in the west of the mausoleum with cusped arches and minarets.

This monument is often referred to as the Dakkhani Taj or Taj of the Deccan. There is an inscription on the main entrance stating that the design & architecture was by Ata-ullah (son of Ustad Ahmad Lahauri, the chief designer of the Taj Mahal) and the engineering and construction by Hanspat Rai.

When in Aurangabad , it is noteworthy to visit any of the Himroo Weaver Factory Shops and Paithani Silks. Silk and cotton threads are used warp and weft to weave Himroo Fabrics . This is an ancient weaving technique brought by Muhammad bin Tughlaq.

In case you are looking for colourful heavy silks , Paithani Silk saris are worth seeing . These silks are also hand woven with ornate designs , zari (gold) borders and motifs of peacocks or parrots or lotus flowers .The weavers also take inspiration from the nearby Ajanta Caves in their designs.

We visited the following two shops in Aurangabad. 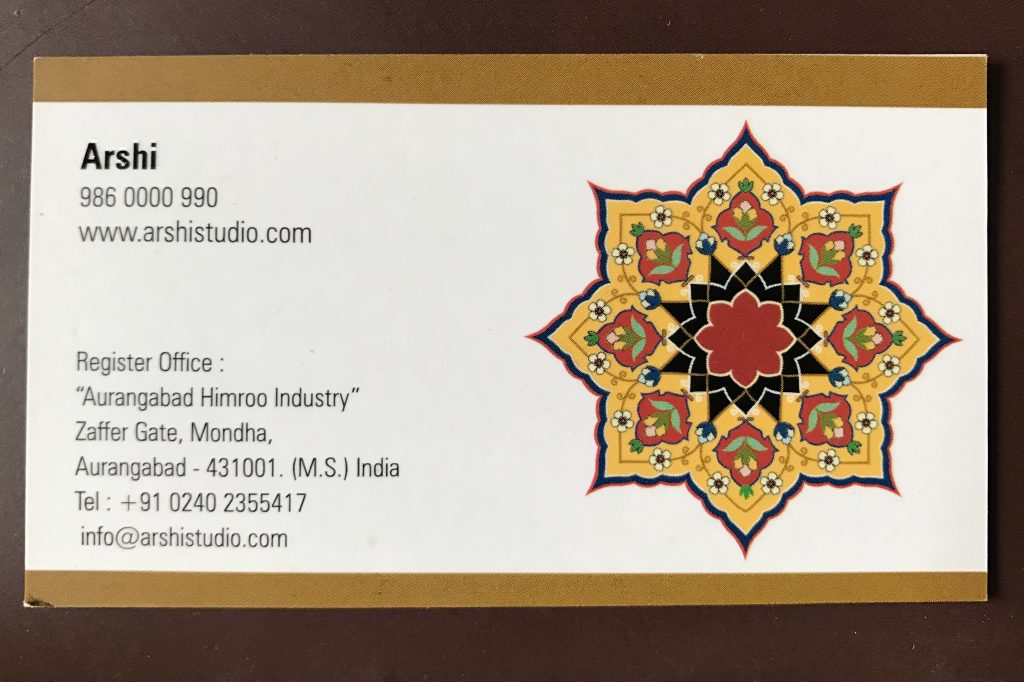 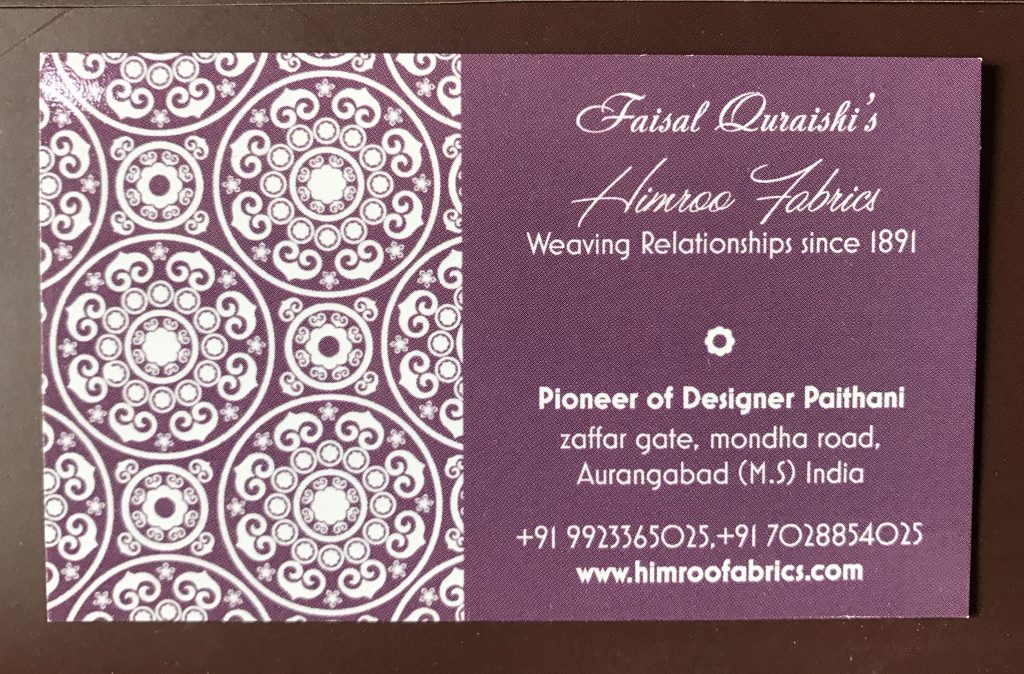 Road Trips in India – Kolkata to Lava and Charkhol