Let me begin by saying that visiting NorthEast Madagascar, MaroantSetra and Nosy Mangabe along with Masoala National Park is truly not for the weak hearted. Nor does it feature in most tourist itineraries in Madagascar. Only serious wildlife enthusiasts or bird watchers or eco tourists visit this part of the island country in North-East Madagascar: Masoala – Maroantsetra – Nosy Mangabe.Our guide for this leg of the journey was Fidelis Velomasy Elysee who introduced himself referring to the Champ Elysees in Paris. We decided to camp for a night in the island reserve of Nosy Mangabe in the Antongil Bay followed by two nights in the Masoala National Park and one night in the Maroantsetra town to take the return flight to Tana. Elysee, our guide is very knowledgeable and based in Maroantsetra. 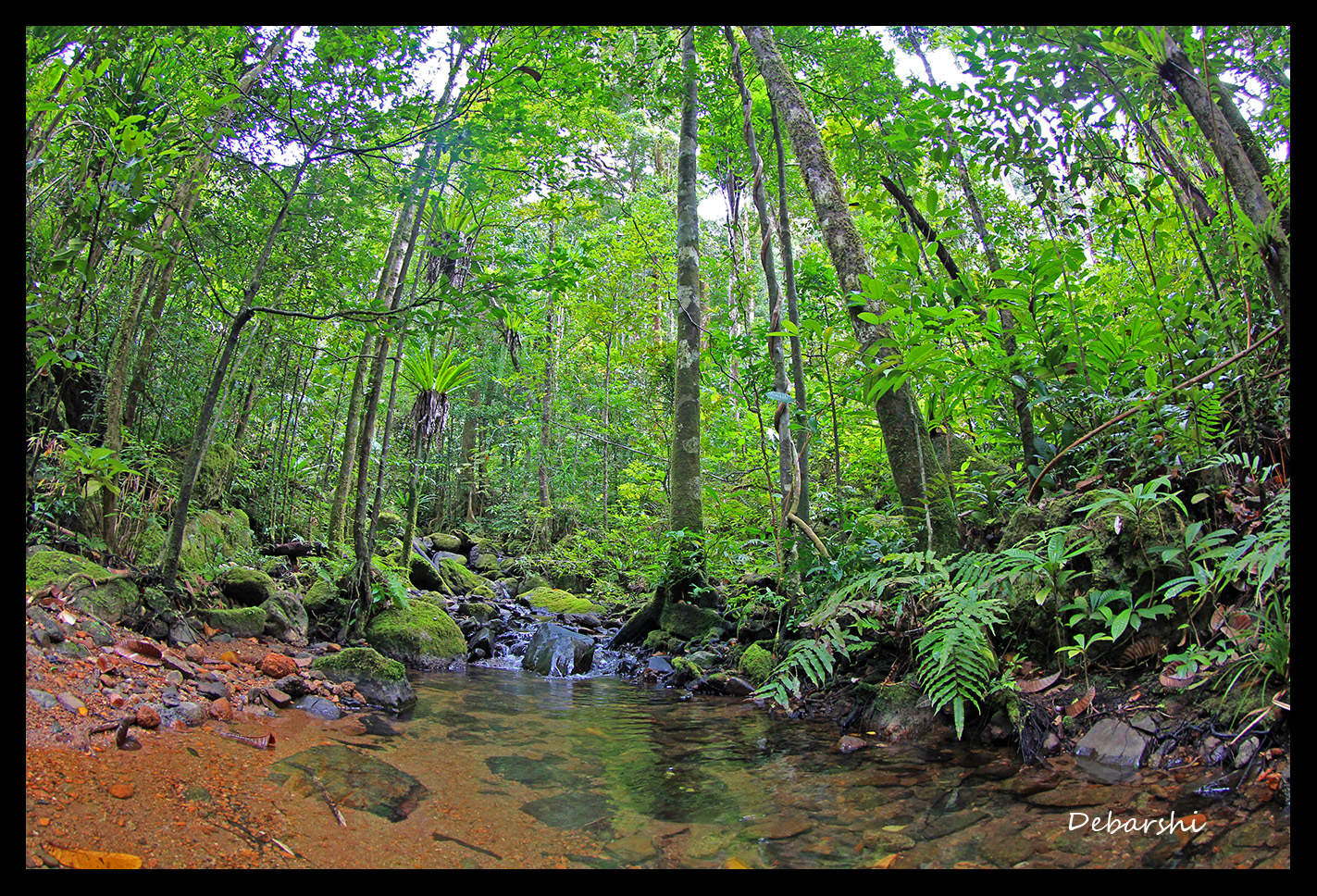 Deep inside the ran forests in Nosy Mangabe 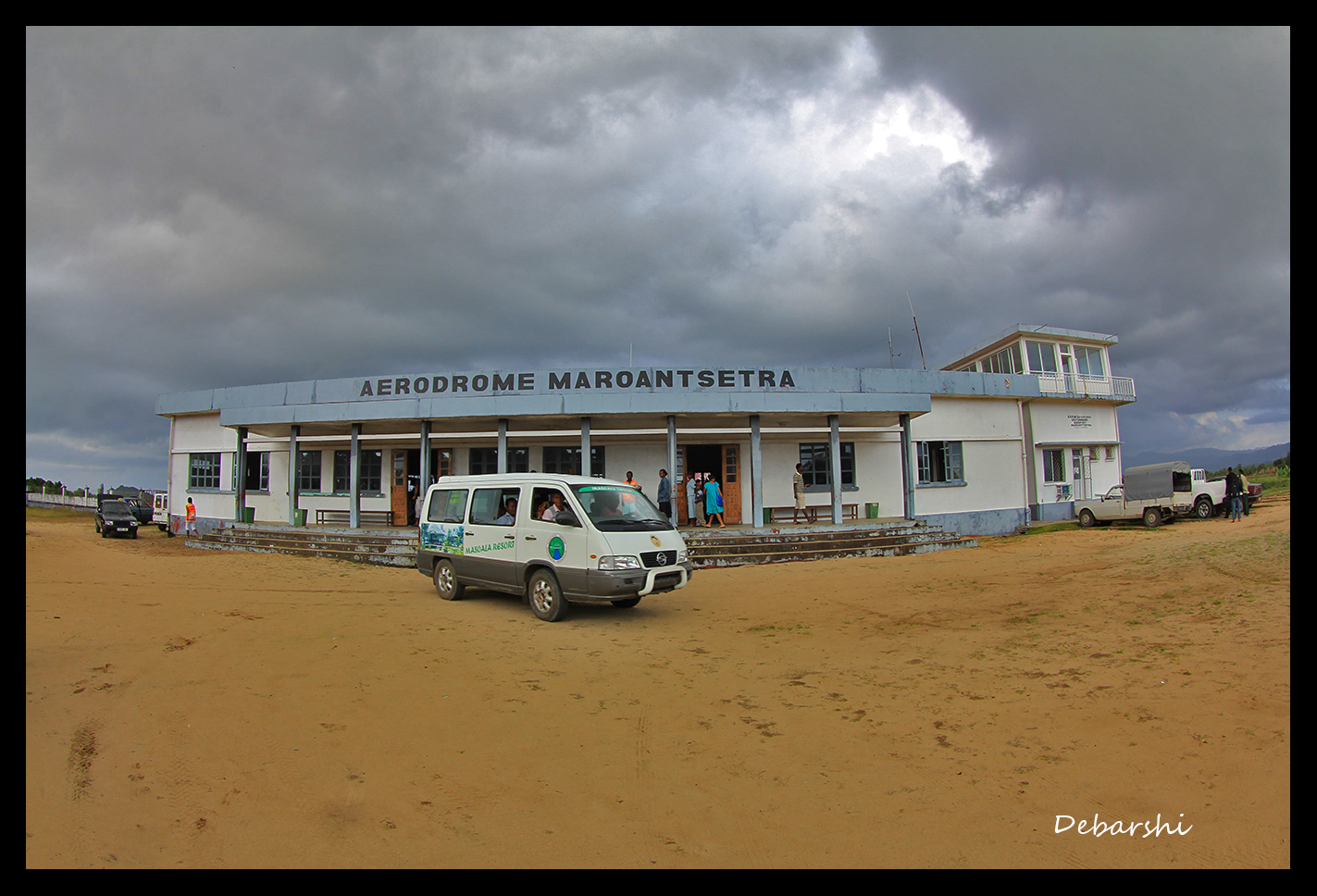 Air Madagascar flies from Tana to Sambava with a stop in Maroantsetra, though often does not land due to poor visibility (it rains 300 days annually).I must narrate our airport experience when we landed in the Maroantsetra Aerodrome. 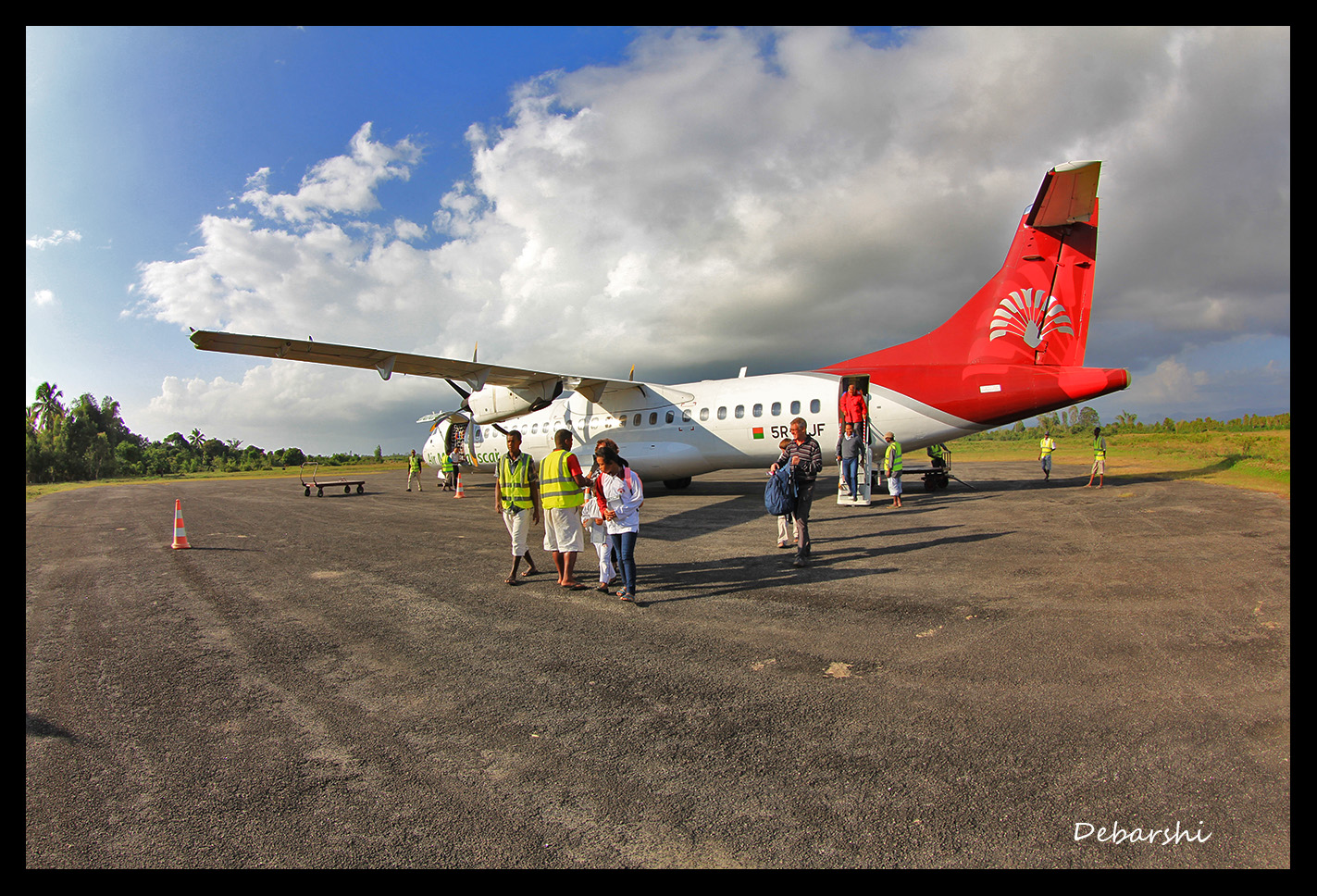 Air Madagascar flight from Tana to Sambava via Maroantsetra 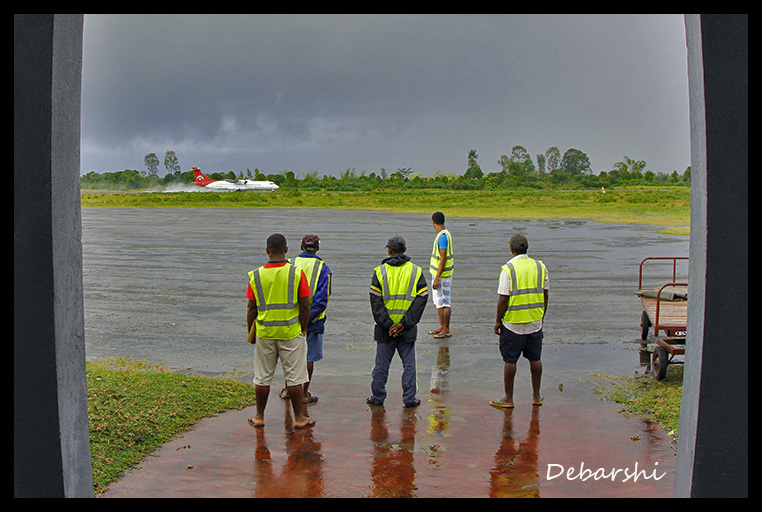 The runway was not just broken but patches of tarmac missing . The airport folks wore fluorescent jackets and cleared the runway of cattle. The airport floor was red and white parquet . A white fence enclosed the business class lounge (yes it has that too) . A dog sniffed the floor for crumbs. The display board was a black board with flight details written in chalk; the conveyor belt was the highlight. Well there is none; the airport porters loaded all the passengers’ luggage into a large trolley and brought into the area marked as “Baggage” , then calling out from the name tags for us to collect our baggage.

To go to Nosy Mangabe, you have to ride a boat for about 30 to 40 minutes (depending upon the sea condition) over the Bay of Antongil and reach the campsite. The cab ride from the airport to the boat stand was equally one-off. 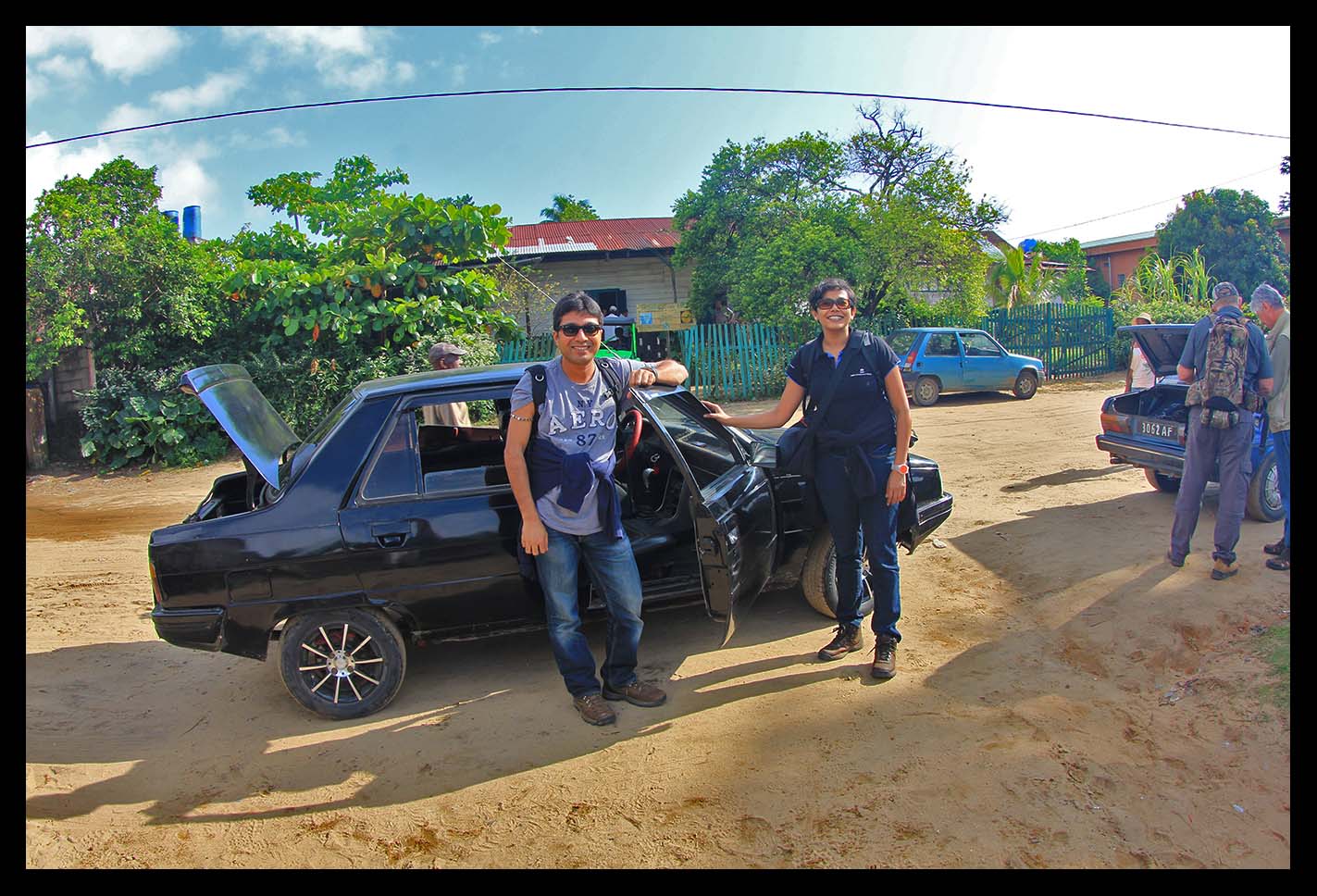 Our cab from the Maroantsetra Airport to the Bay 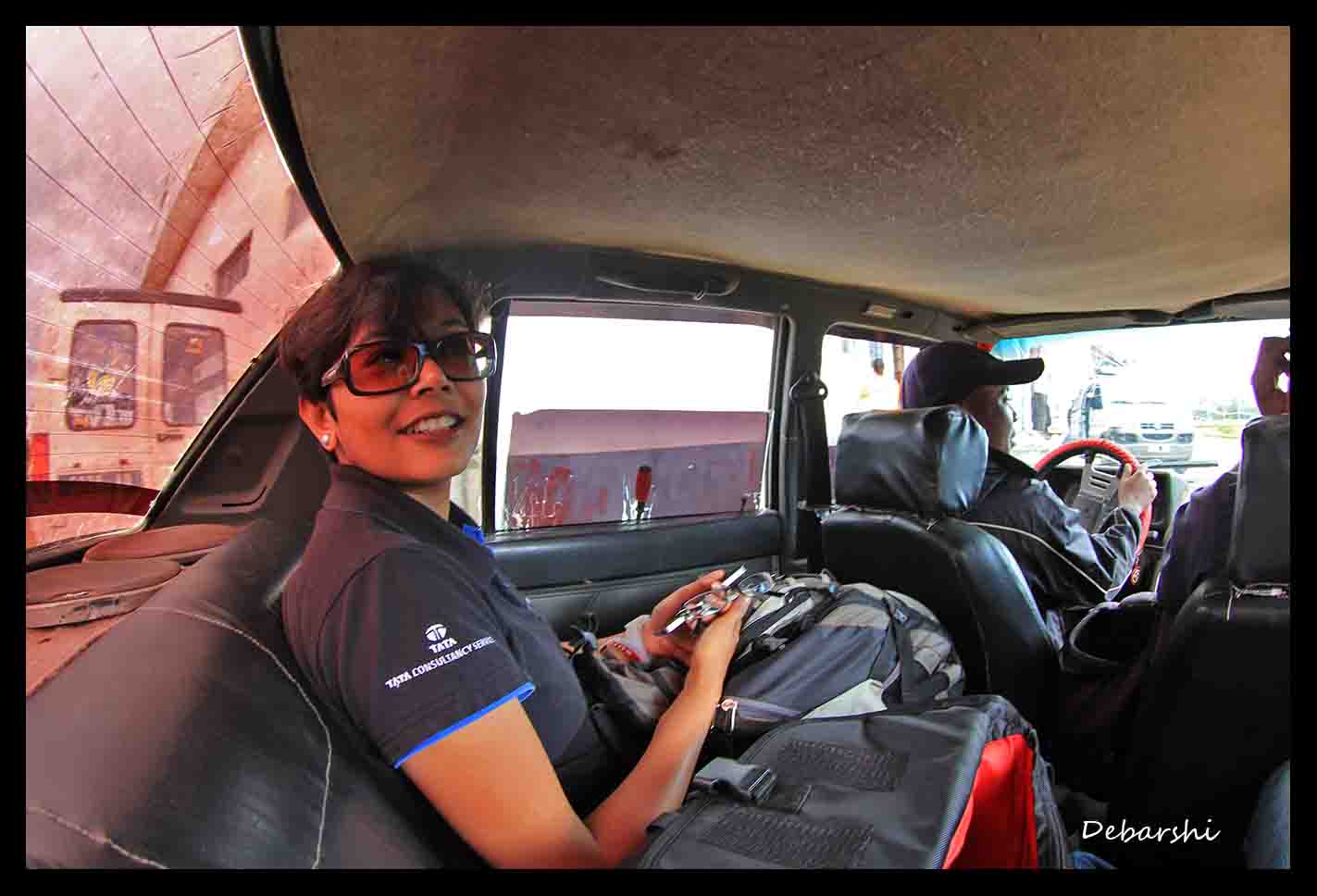 Please note the screwdriver holding up the window

I could not close the door since there was no handle, the driver closed it from outside, the window was held by a screwdriver, and the car’s trunk had to be kept open using a tree branch to load luggage. All provisions to Nosy Mangabe & Masoala go in from Maroantsetra which were also loaded on to the boat. There were two other boats – one carry a Swiss couple Hans & Elizabeth and the other a pair of Australian Birdwatchers Geoff & Peter.

Our motor boat was the“Red Lemur”, probably after the Red Ruffed Lemur or after the old captain who was wearing a red velvet jacket and had only two teeth. The boat was absolutely spartan, more like a fiber canoe with two Yamaha motors. The porters loaded our luggage and provisions and covered them with an orange tarpaulin. We wore the rain ponchos and then the life vests . Little did I realize we were up for hair raising boat ride – we were feeling like puny mice against the mighty rolling seas and the boat like a matchstick in the waters of the Helodrano Antognila Bay.

We were riding against the direction of the waves and were falling with each wave with a thud. And our captain wanted to reach the island first. The island of Nosy Mangabe has the ruins of the Dutch Pirate ships on the northern side and rock carvings by Dutch Sailors on the western side. Ely also showed us shipwrecks. Our captain was ecstatic on reaching the shores in less than half an hour. We were truly grateful for the end of the ride.

Reminiscent of Robinson Crusoe at the Campsite in Nosy Mangabe

As soon as we dismounted from the Red Lemur, we fell in love with the pristine sands and azure waters. Completely marooned and isolated from the mainland, we were at the mercy of nature. Really felt like Robinson Crusoe! Once our bags had been unloaded, a really friendly brown lemur came to look for crumbs and kept on jumping from one bag to the other. 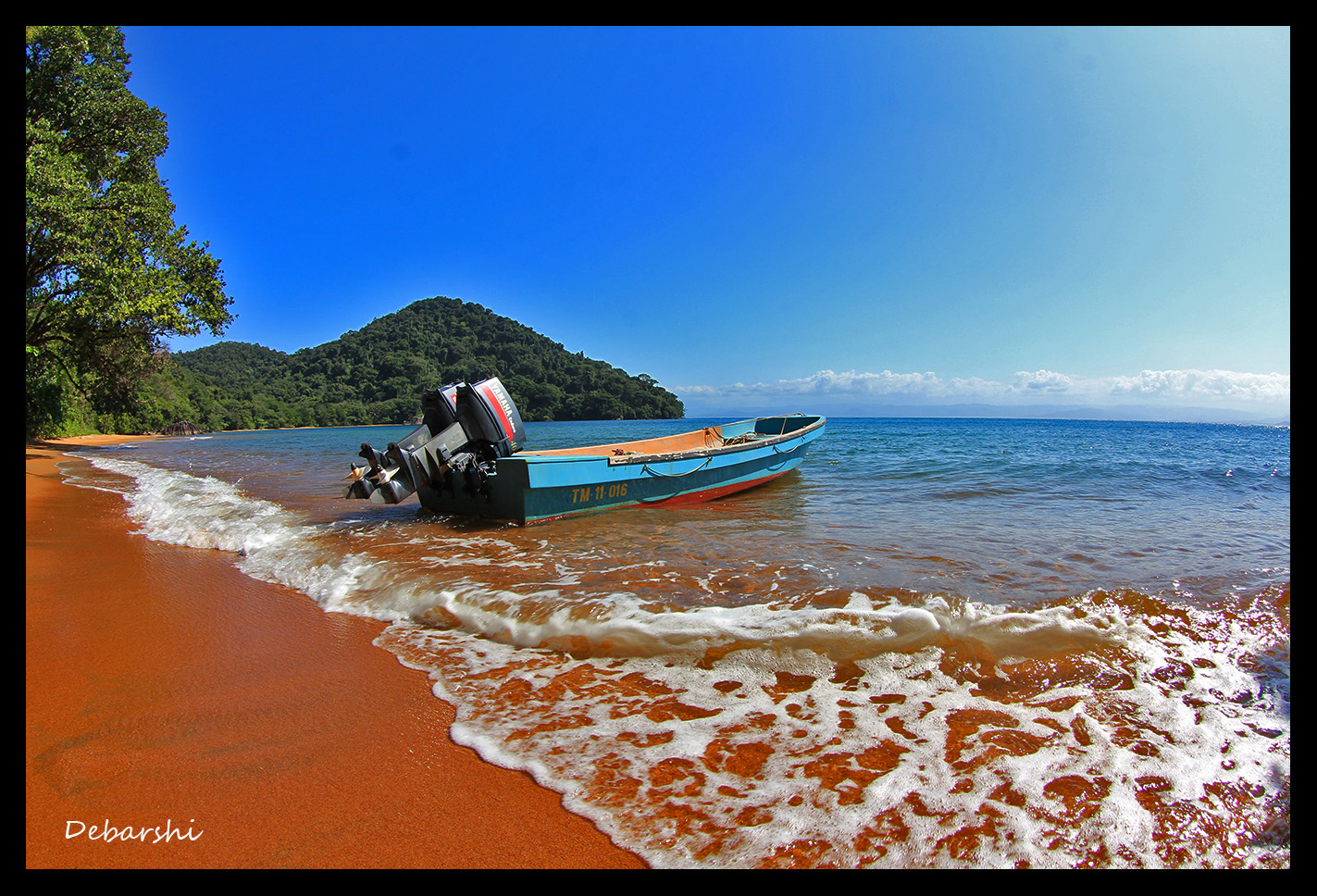 Our boat , the Red Lemur anchored in Nosy Mangabe

A tiny part of the island serve as the camp grounds for the few eco-tourists with some Basic tents on raised platforms. 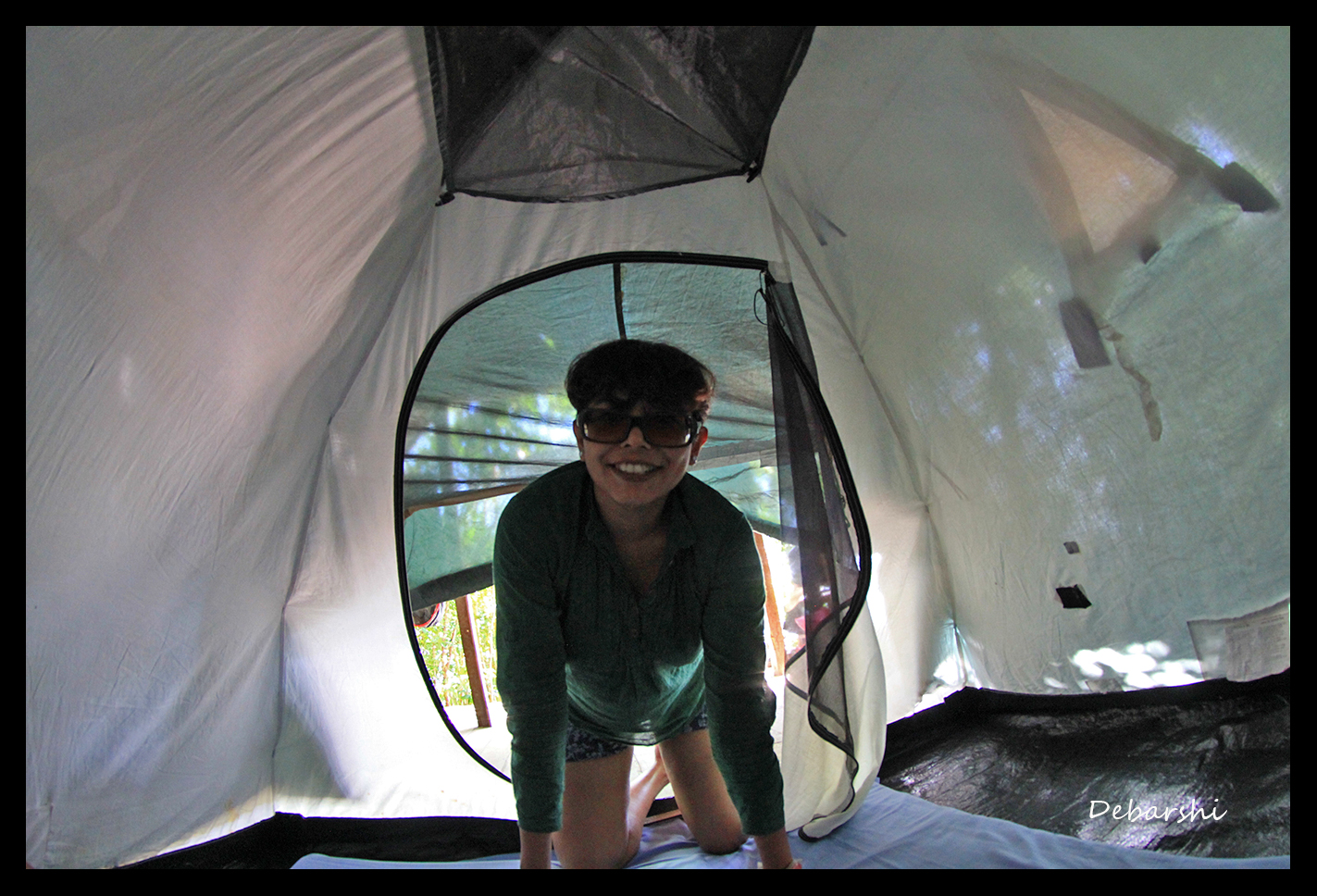 Me entering our tent in Nosy Mangabe

There are few common toilets and a bathing area. There is a large room which doubles up as the kitchen and accommodation for the guides. Monica was our hostess . She really treated us to scrumptious food (probably tasted more delicious because of our long hikes). Lunch was Salad, Pasta with Meat and Fruits while Dinner was Salad, Potatoes and Prawns and Beignet. 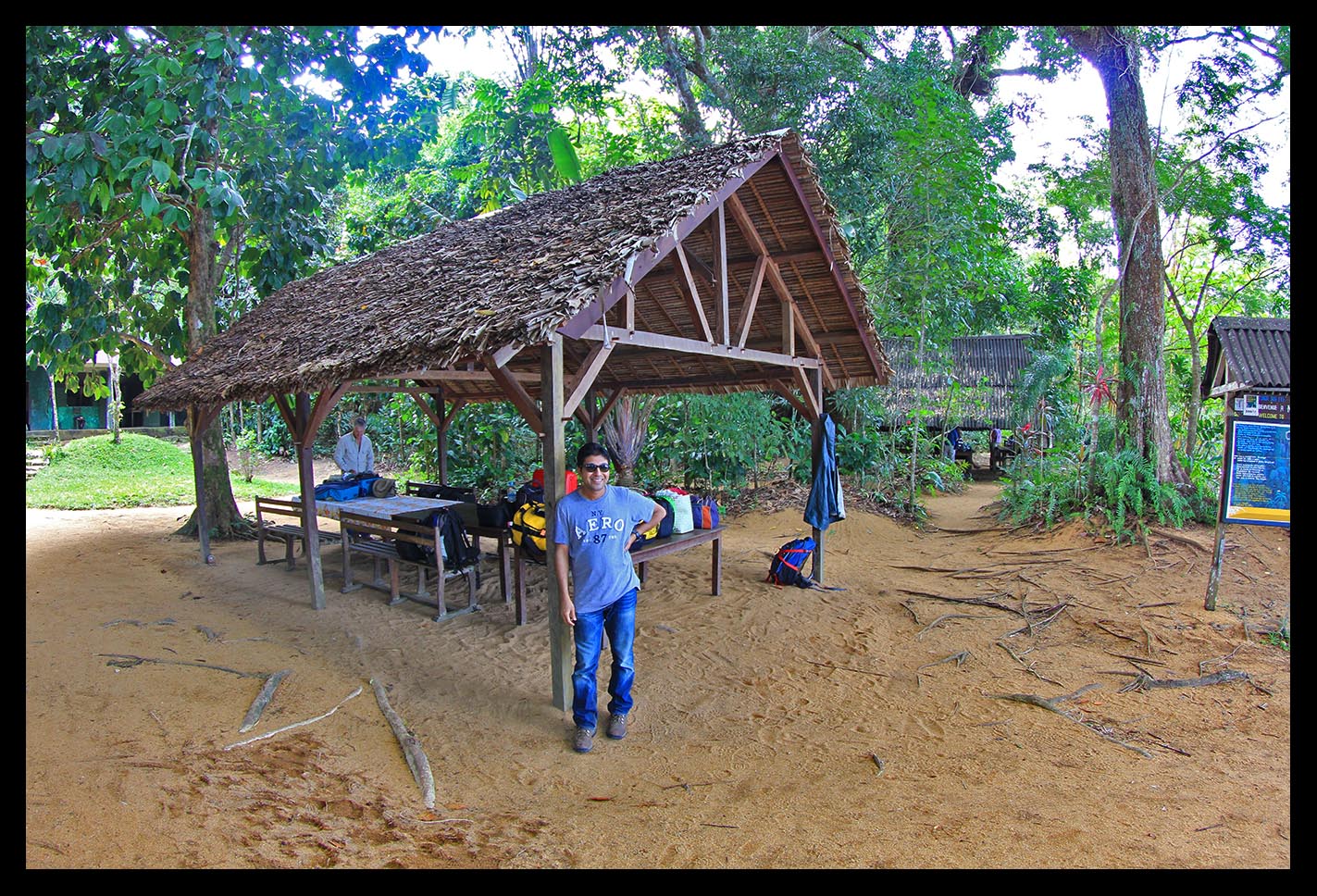 The morning trek in the rain forests of Nosy Mangabe

Please remember to carry insect and leech repellents and protective rain gear when travelling to Madagascar.   The morning hike was really productive ; Elysee was as excited to spot as we were to observe. He showed us the Madagascar Buzzard, Black and White ruffed Lemur, White fronted Brown Lemur, the world’s smallest Chameleon – Brookesia; Mantella (frog); Plethodonto, Mantidactolis (chameleons), the leaf tailed gecko – Uroplatus and Mantis. 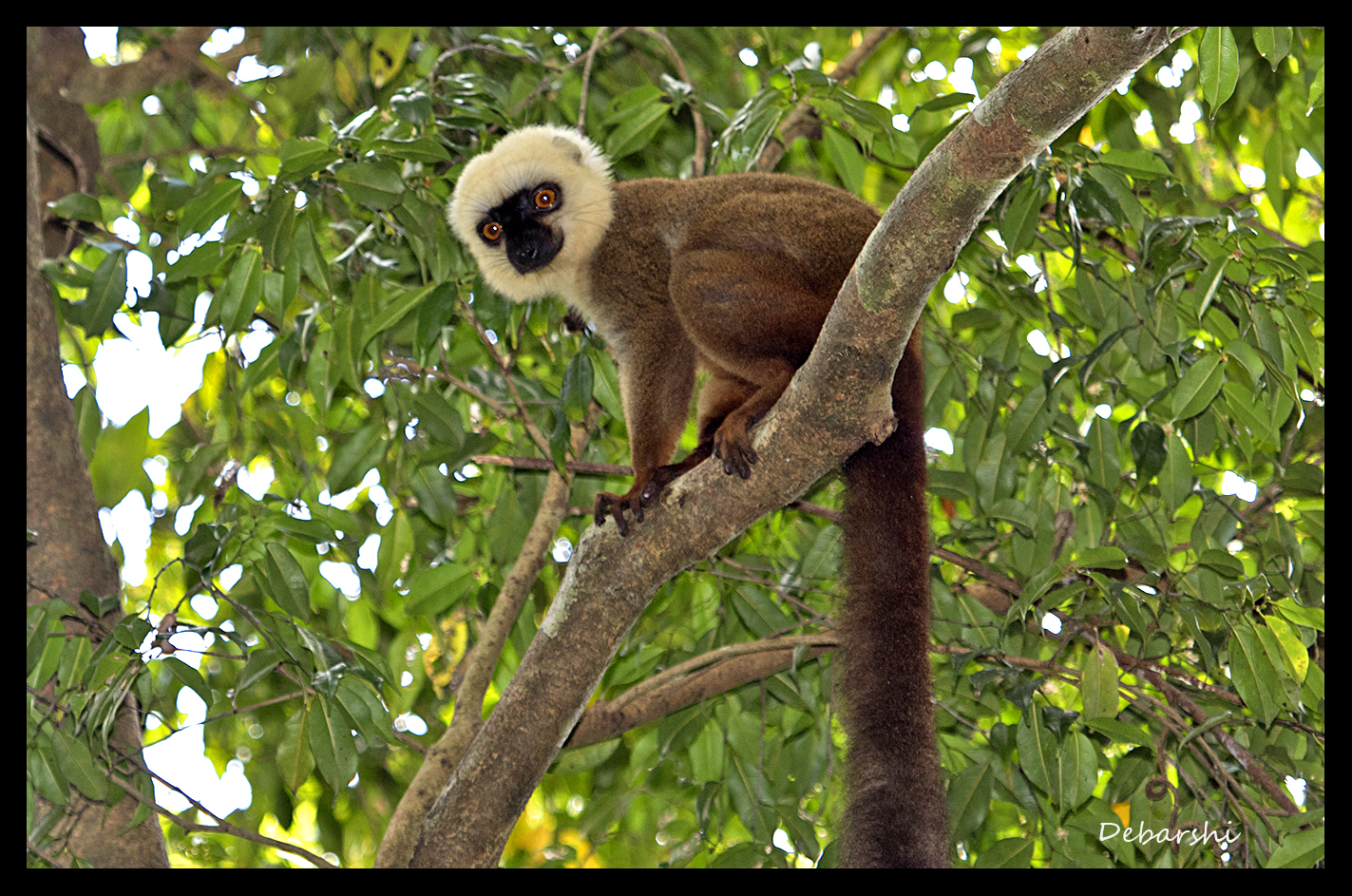 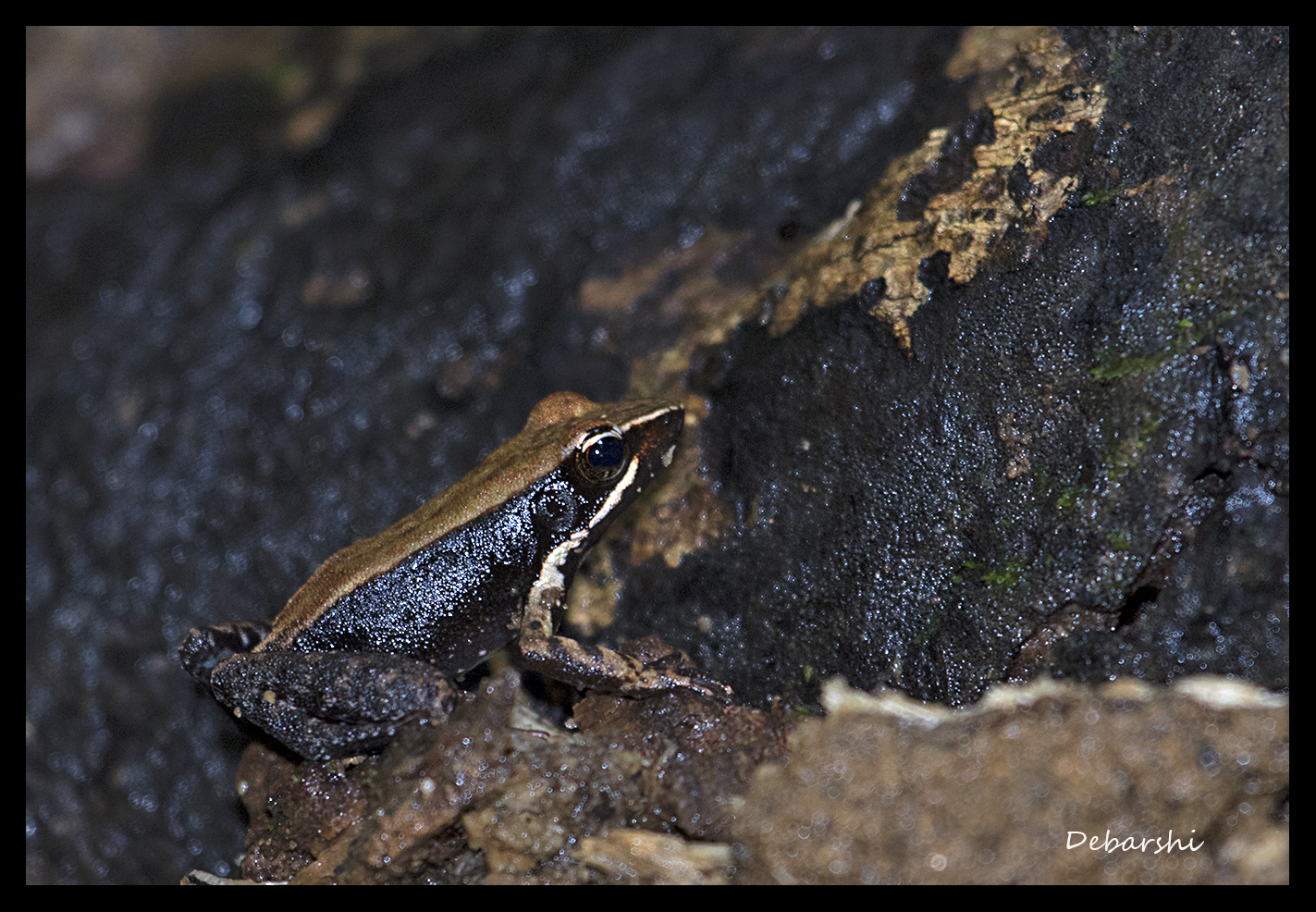 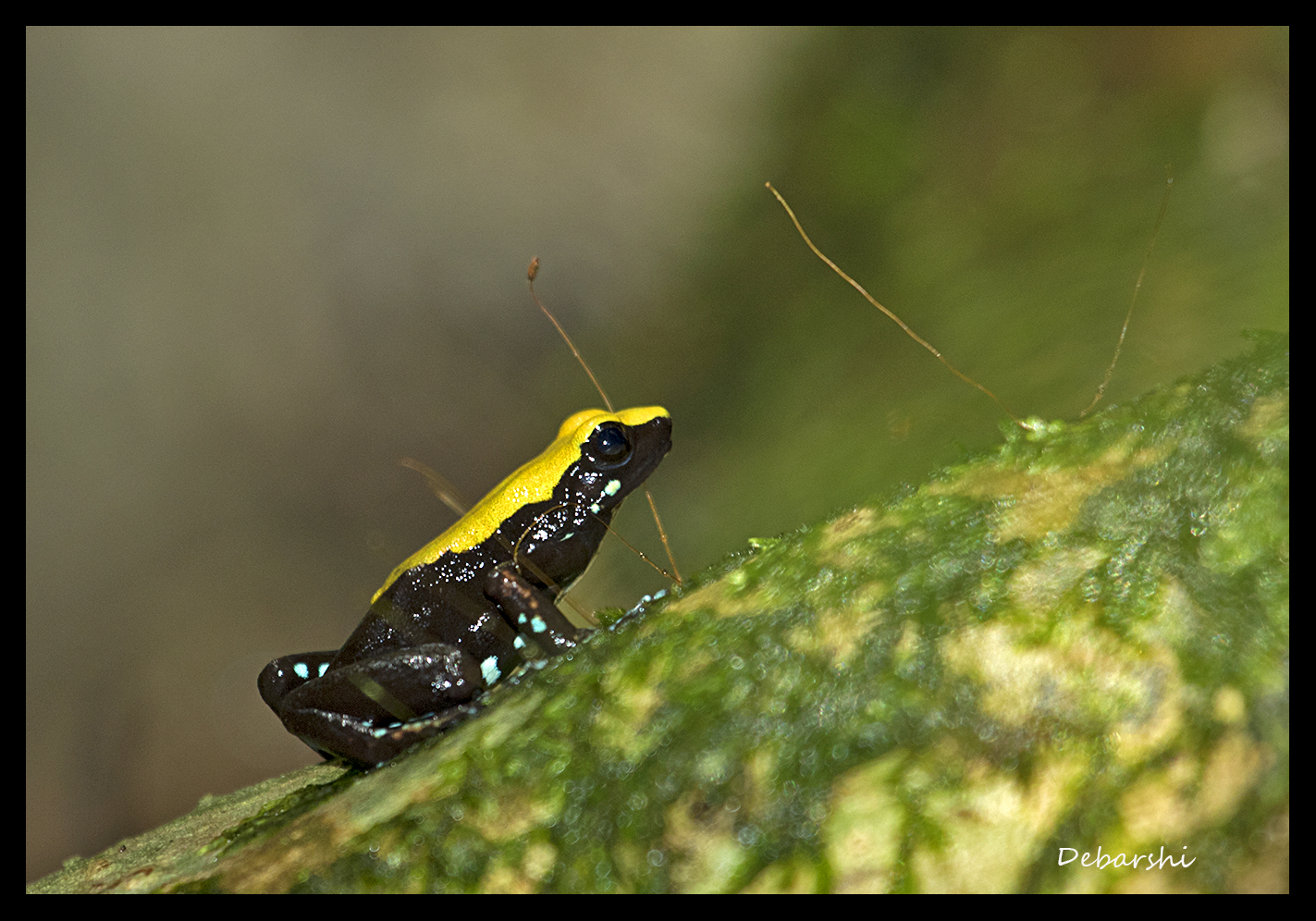 He also showed us the ancient tombs of the Malagasy tribes. On the weather front, we did get a lot of sun and also torrential rains for a short while and then the sun again. The trek is really treacherous. The rocks are moss lined and the trails are muddy and slippery . Do remember to tread carefully and wear very good waterproof trekking shoes with high ankles.

The afternoon well spent on the beach

The white sands are very captivating ;we saw the black rocks covered with ashy gray barnacles. In the forest walk along the beach, we spotted the Leaf tailed gecko (Uroplatus fimbriatus). 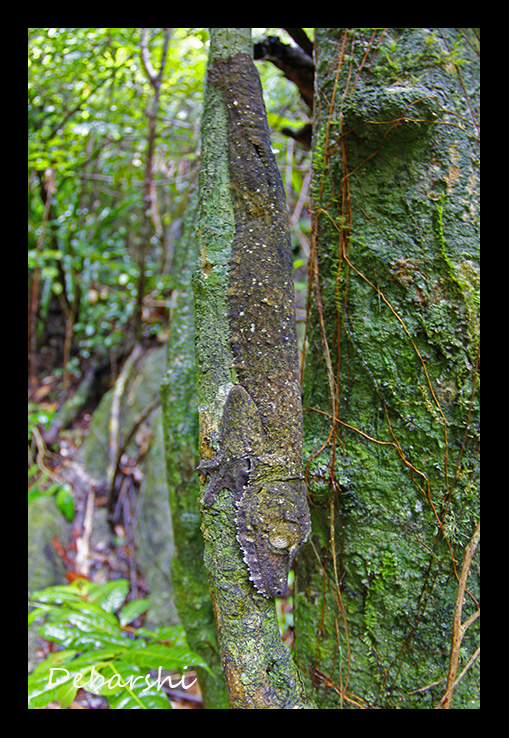 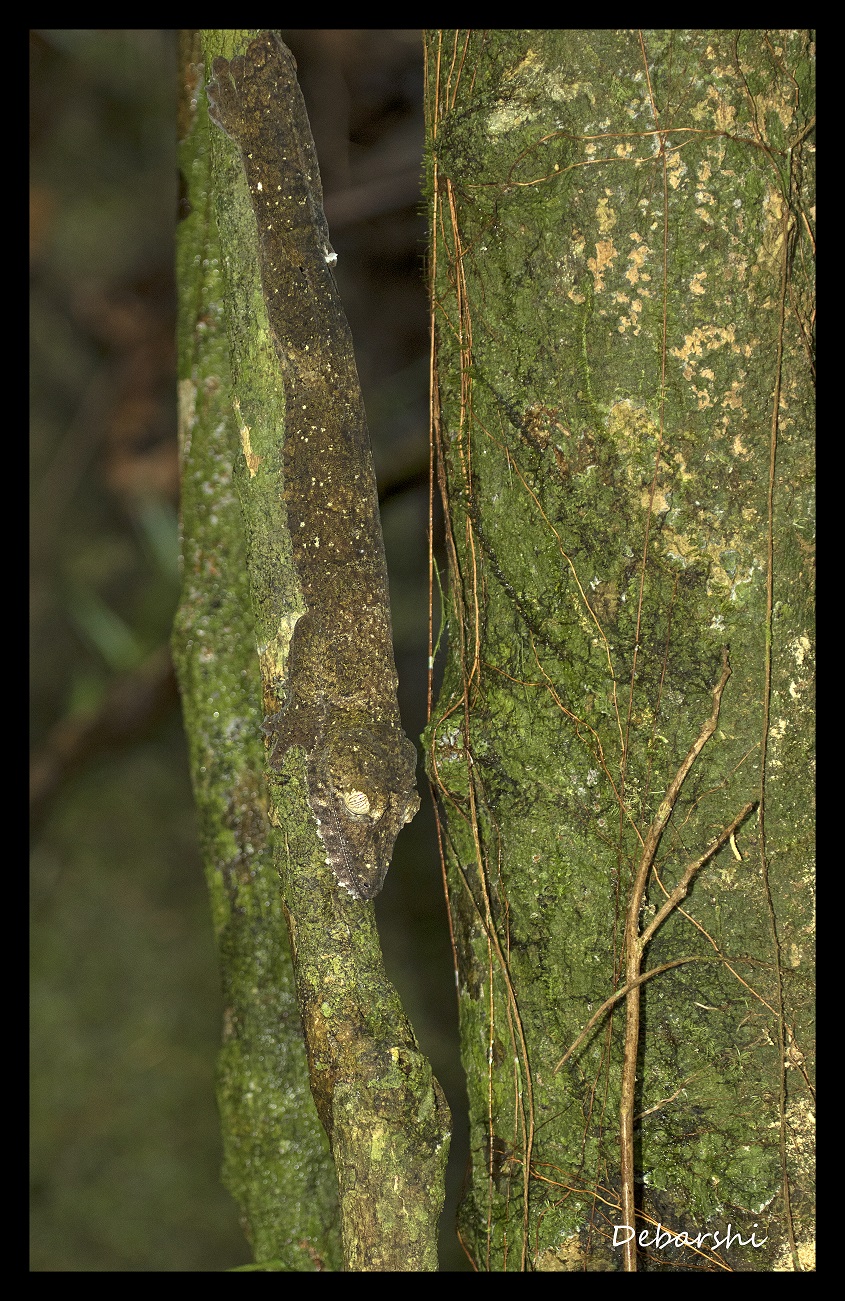 Monica lit a lot of candles in the camp at dinner . Truly a surreal experience ! The winds from the bay were very strong and in flew a large hairy caterpillar on to Debarshi’s plate. A large harmless yellow snake had slithered onto the other table. One of the Australians, Peter just picked it up brandished it for all and threw it into the forest. 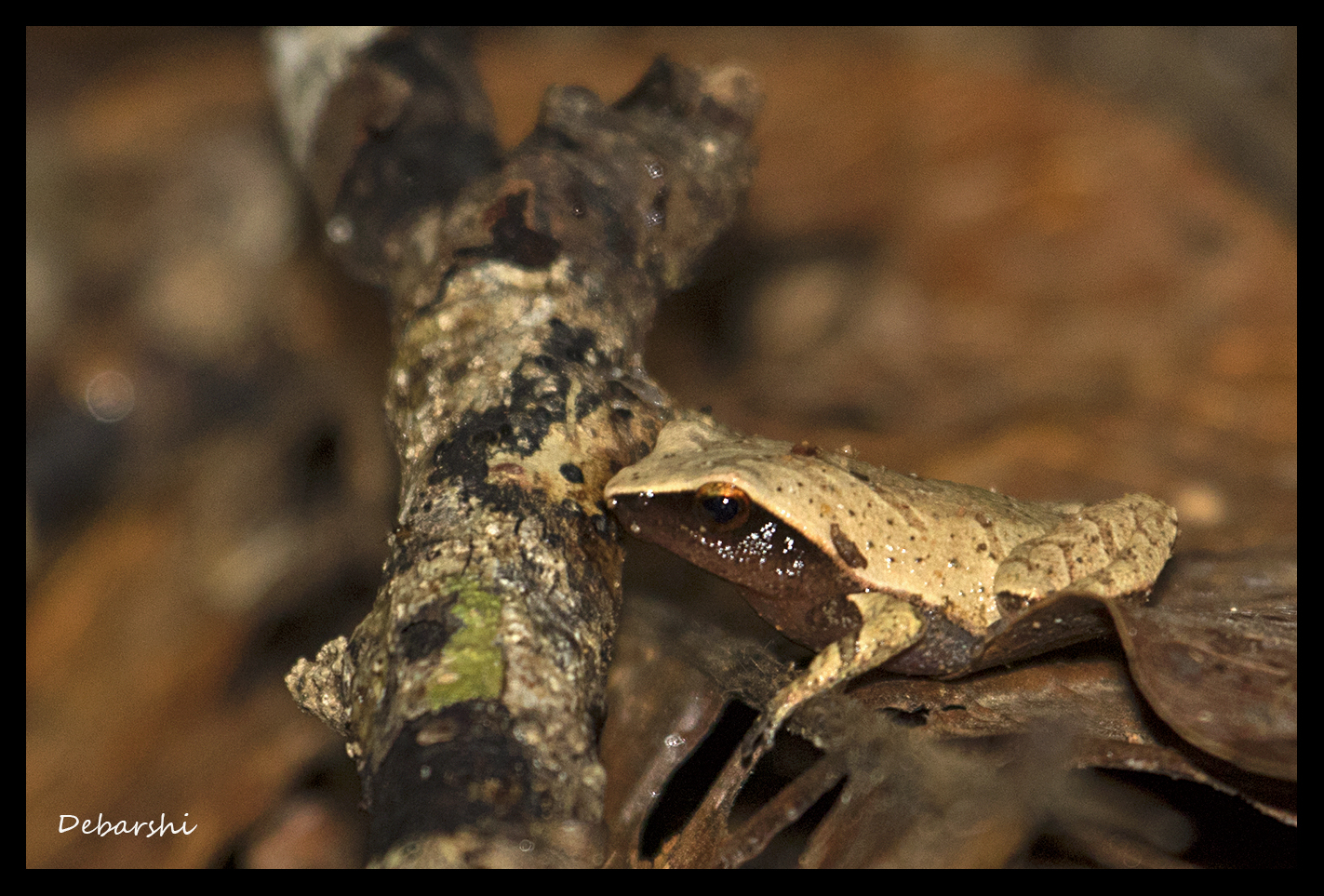 you can read about our experiences in Masoala & Maroantsetra in my next post on the marvelous Masoala National Park.