The Masoala National Park and the tiny island reserve of Nosy Mangabe are probably one of the largest protected land areas in Madagascar .

This park was established in 1997. The park is teeming with diverse flora and fauna including endemic species. This park is unique due to the rainforest meeting the ocean.The terrain ranges from forest wetland to coastal forests .

Every July to early September, schools of humpback whales visit the Antongil Bay. The warm current of this bay aids the breeding and calving process of whales. We had planned our visit in September to view their migration. Alas, the park rangers told us the whales had left by August .

This park is one of the least visited places because it is one of the wettest places . It rains 300 days annually. Furthermore , you can reach here by a 3 hour rough boat journey on a motorised fibre canoe.

We travelled to North & East Madagascar in September 2015 . We hiked through the rain forests of Masoala National Park . Another notable place is the town of Maroantsetra . 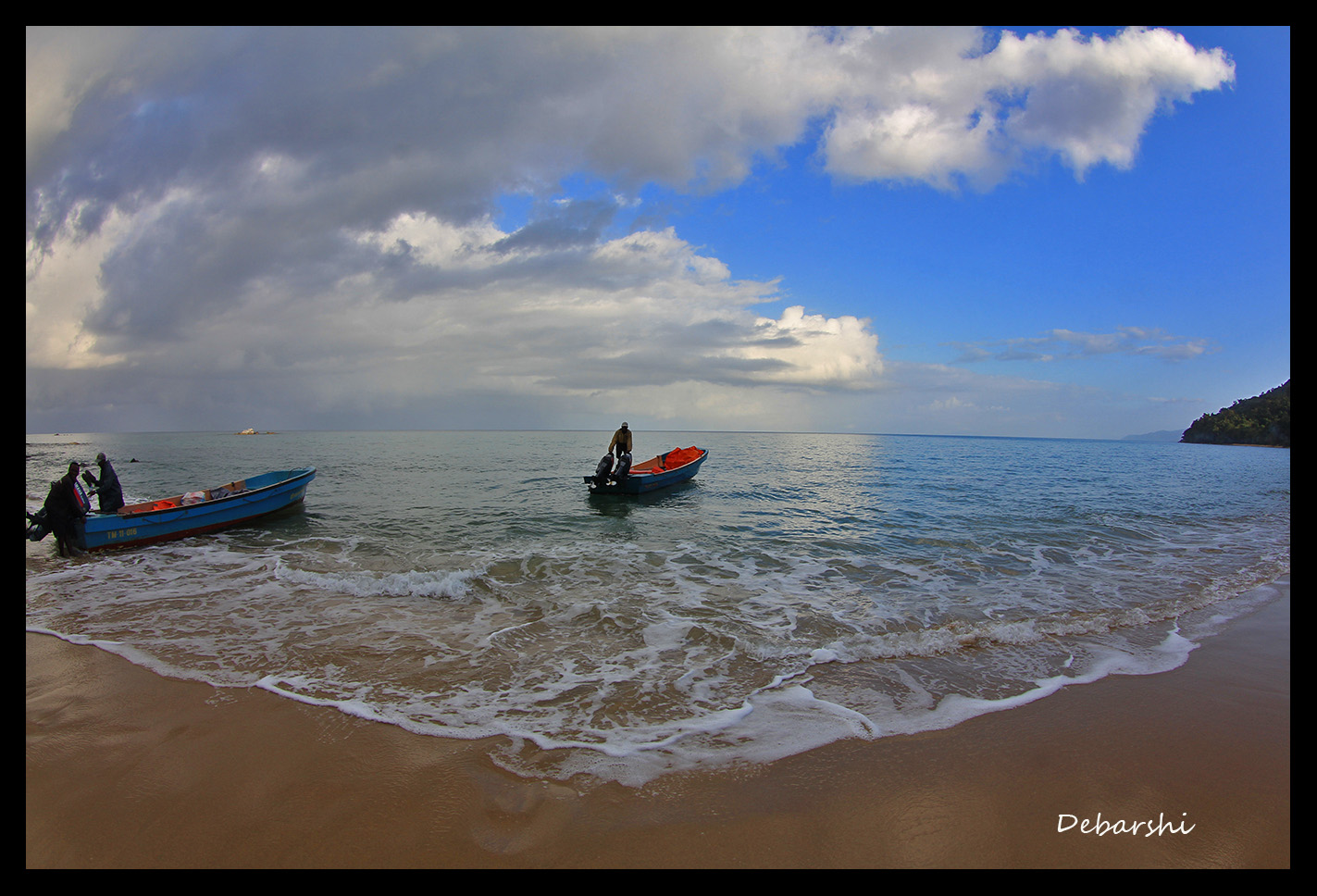 How to get to Masoala National Park

After a cold rainy night, the rains had stopped. We were ready to leave for Masoala on an even longer sea ride. Since the seas turn rough with the day, we decided to leave before sun rise at day break around 5 am. Thankfully the boat ride for an hour and quarter was calmer than anticipated.

We reached Masoala quite upbeat. For the next two nights we were at the Ecolodge Chez Arol with our guide, Fidelis Velomasy Elysee.

This unique Ecolodge was built by a Malagasy Armand and a French Olivier, thus the name AROL combining the initials of their first names. The Individual comfortable cottages are built of wood situated amidst lush green grounds . The cottages have two twin beds, 24X7 hot water facility and a porch with a sofa. The lodge runs on hydroelectric power harnessed from the mountain spring and an additional generator put up by Olivier for the neighboring fishing village as well. 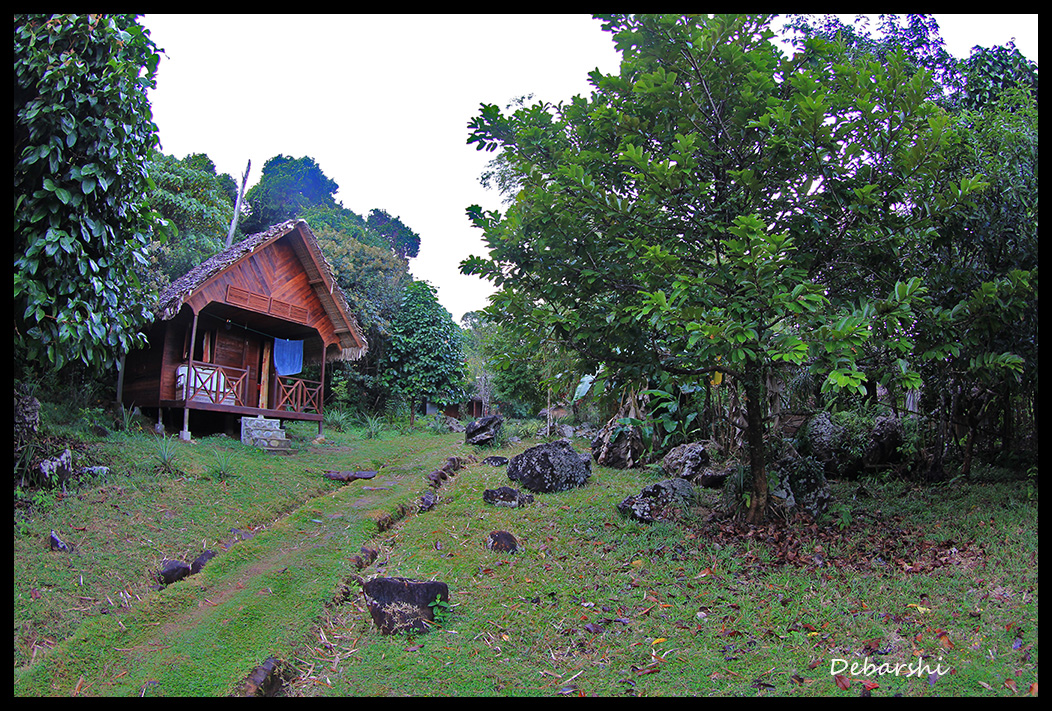 Our Cottage in the Ecolodge Chez Arol in Masoala

The service is very good and you have coffee and cookies in the dining hall at all times. Some villagers have been trained as kitchen and housekeeping staff , thus the chef is quite adept at rustling us a variety of  dishes. We ate Prawn skewers with veggies, Seafood in coconut milk, Chocolate mousse , Chicken & Onion Quiche to name a few.

After a short beach trek, one reaches the Masoala National Park. We embarked on a 4 hour circuit. The day had begun sunny and breezy and we prayed that it remained like this. Elysee tracked and showed us the Masoala endemic species – Red Ruffed Lemur, Helmet Vanga and Short legged Ground Roller. 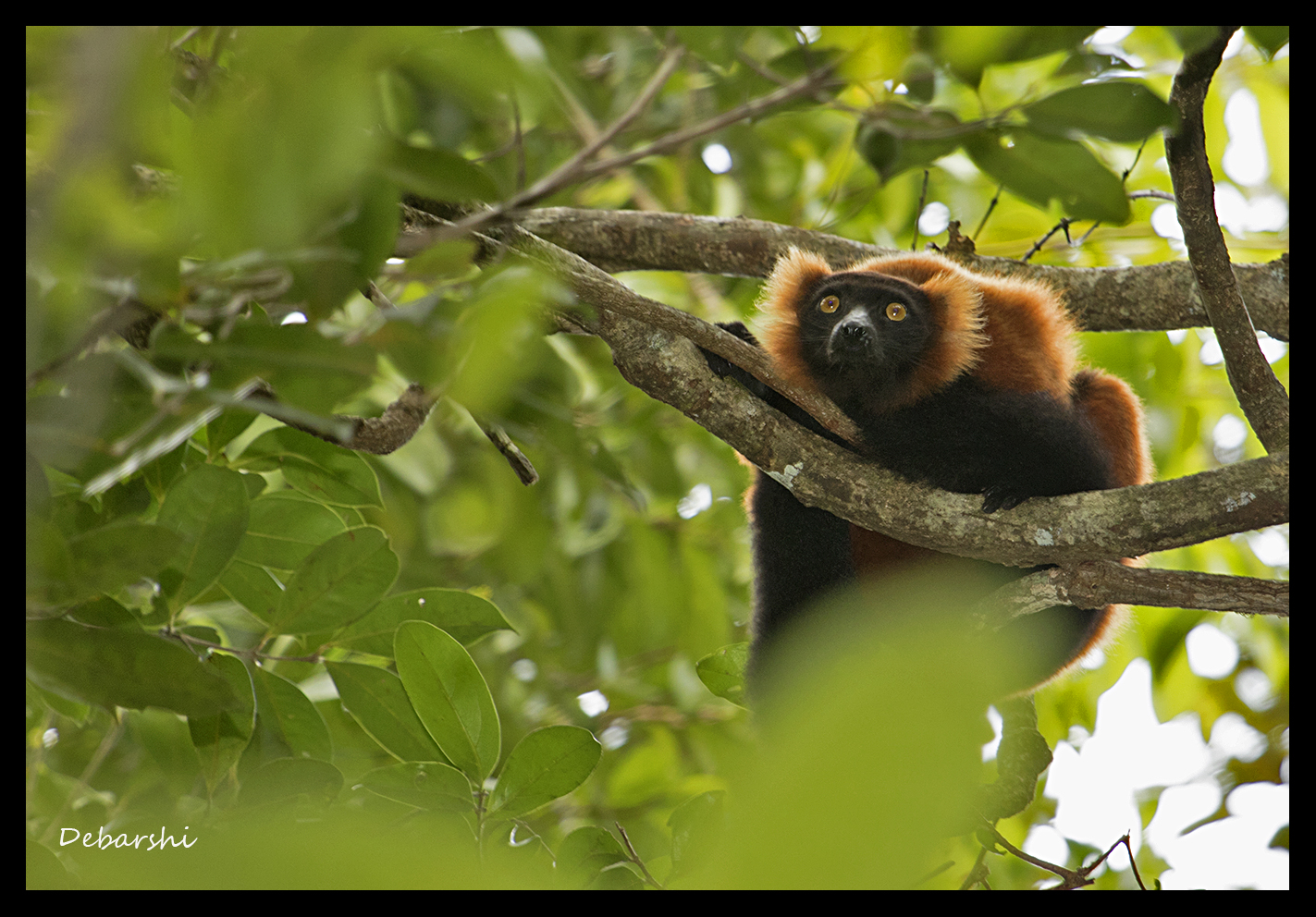 We also saw other species like Greater Vasa Parrot, Ring Tailed Mongoose and Red Fronted Coua. Lucky not to bitten by snakes or leeches, Elysee showed us the harmless yet scary looking giant millipede. 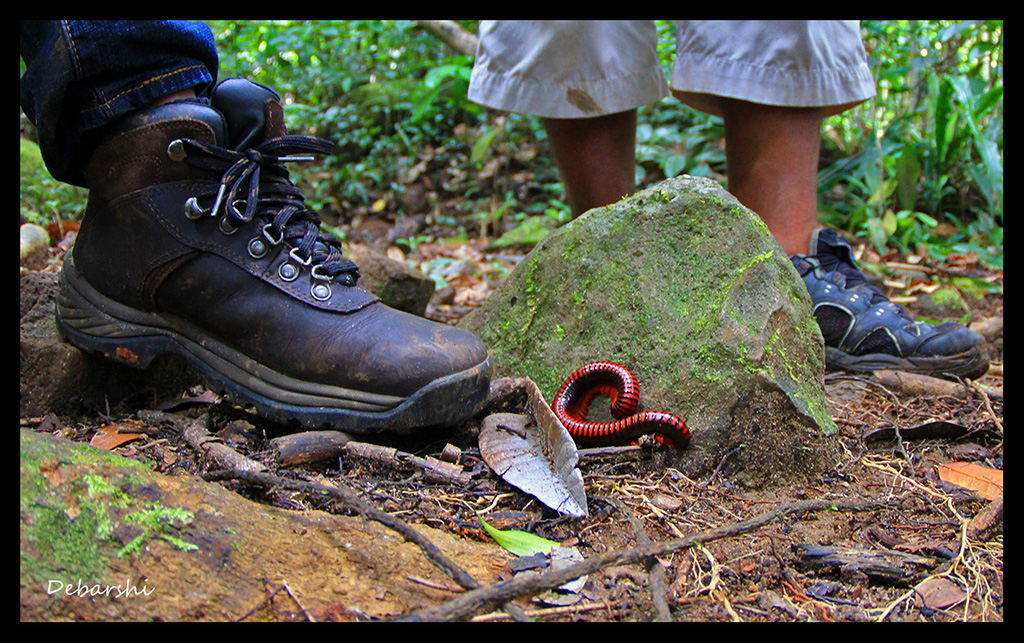 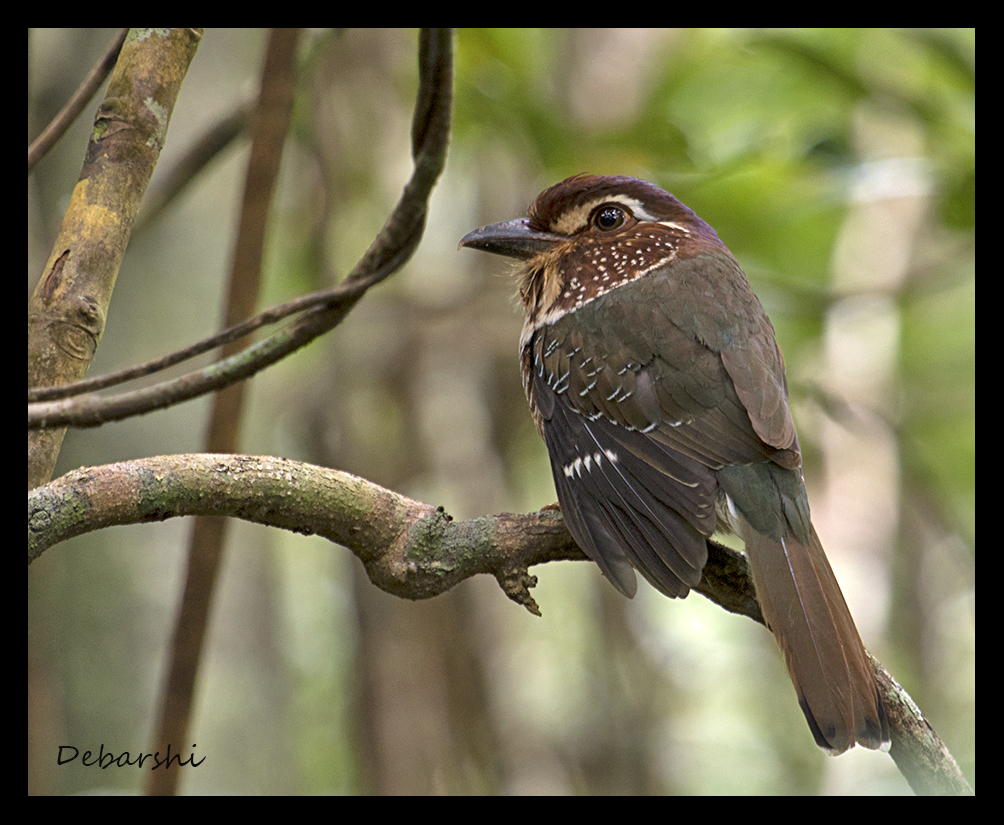 We also met a Japanese research team camping there for 20 days to study the habitat of the Helmet Vanga. They were on their third but still unproductive day. 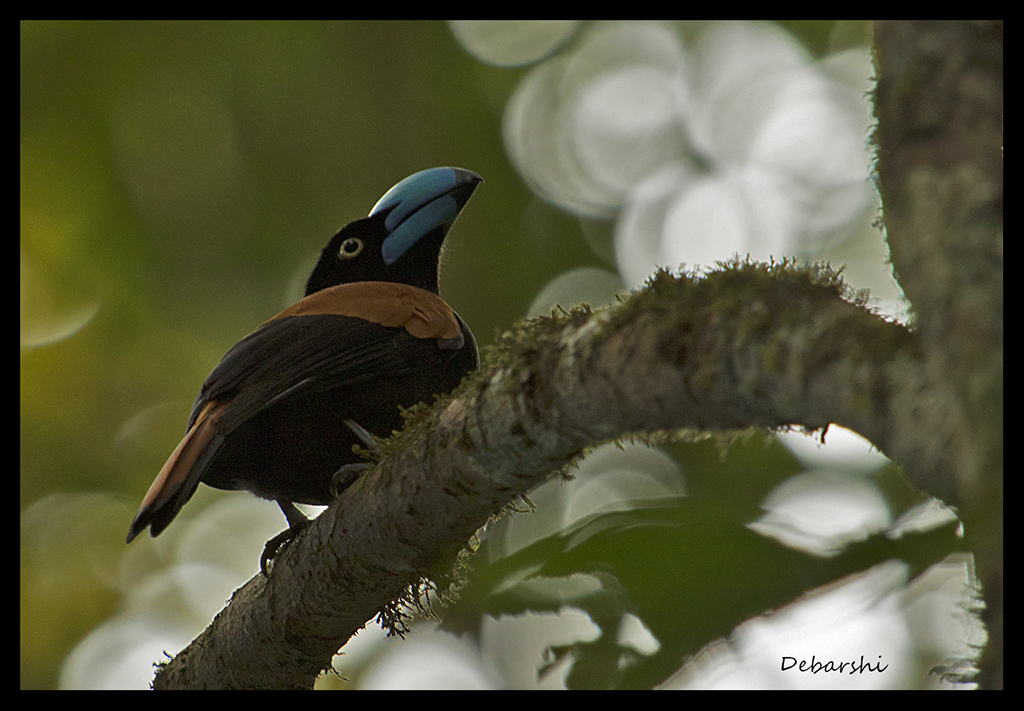 We woke up to a rainy morning  having poured through the night. Our original plans of starting early did not work out with us finally leaving at 9 am when there was a brief respite from the rains. It started raining heavily again and we donned our rain coats and rain ponchos. 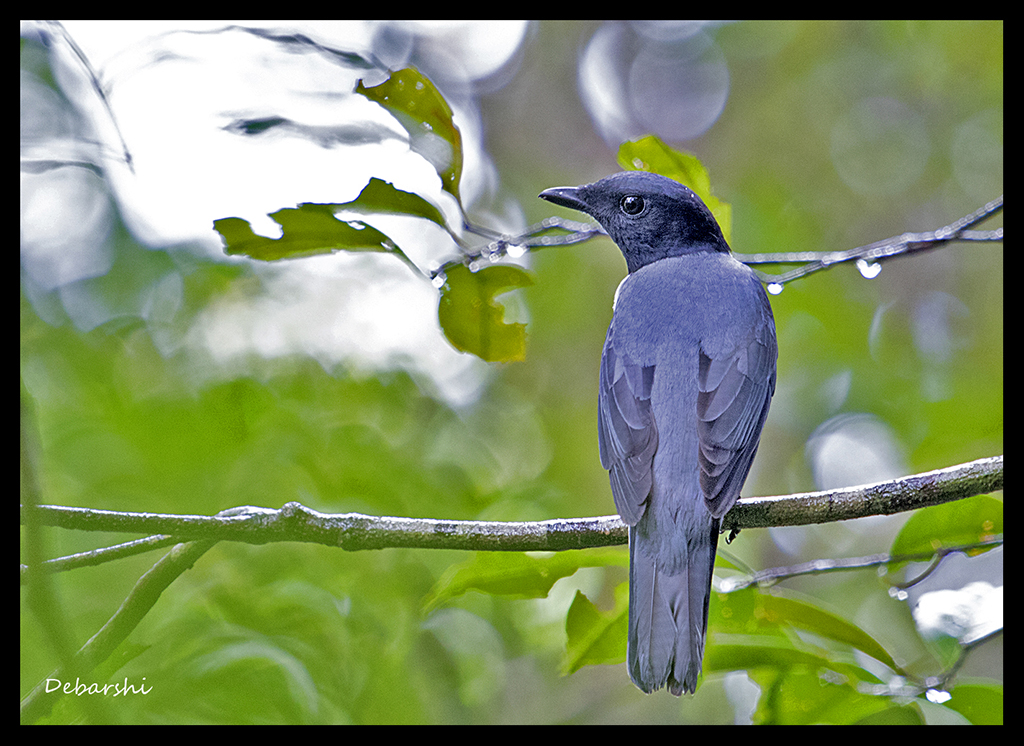 We could only catch a glimpse of the Red tailed Vanga and the Madagascar Cuckoo shrike. Reminiscent of Andasibe here too, an inquisitive male Malagasy Paradise Flycatcher was following us. 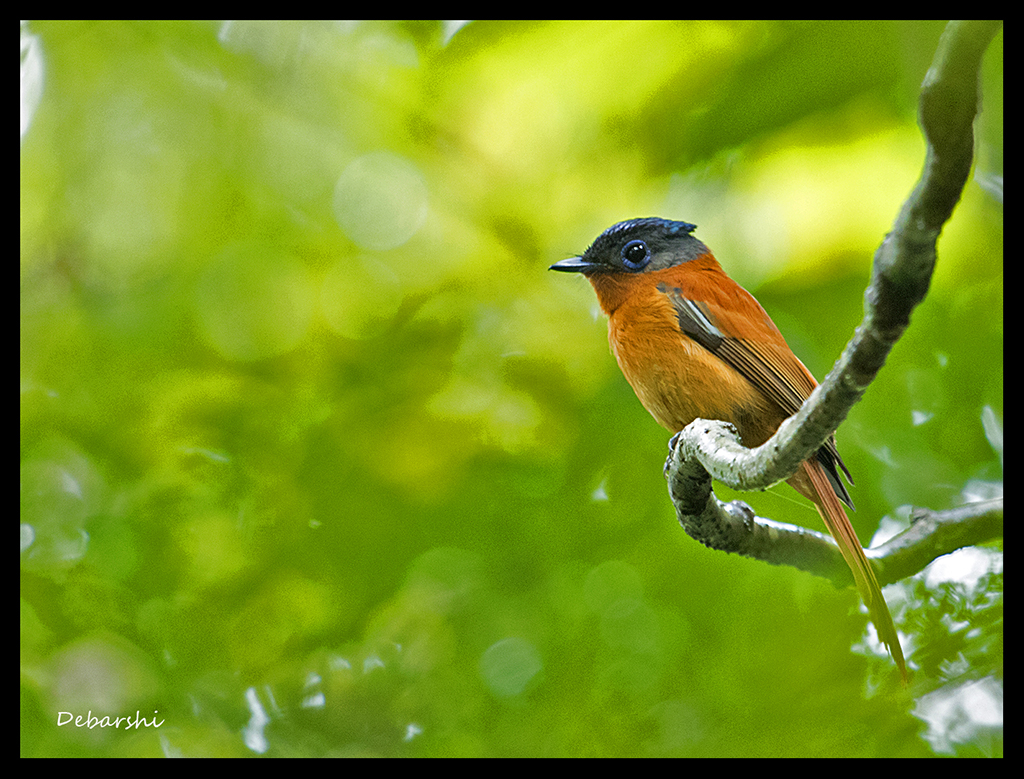 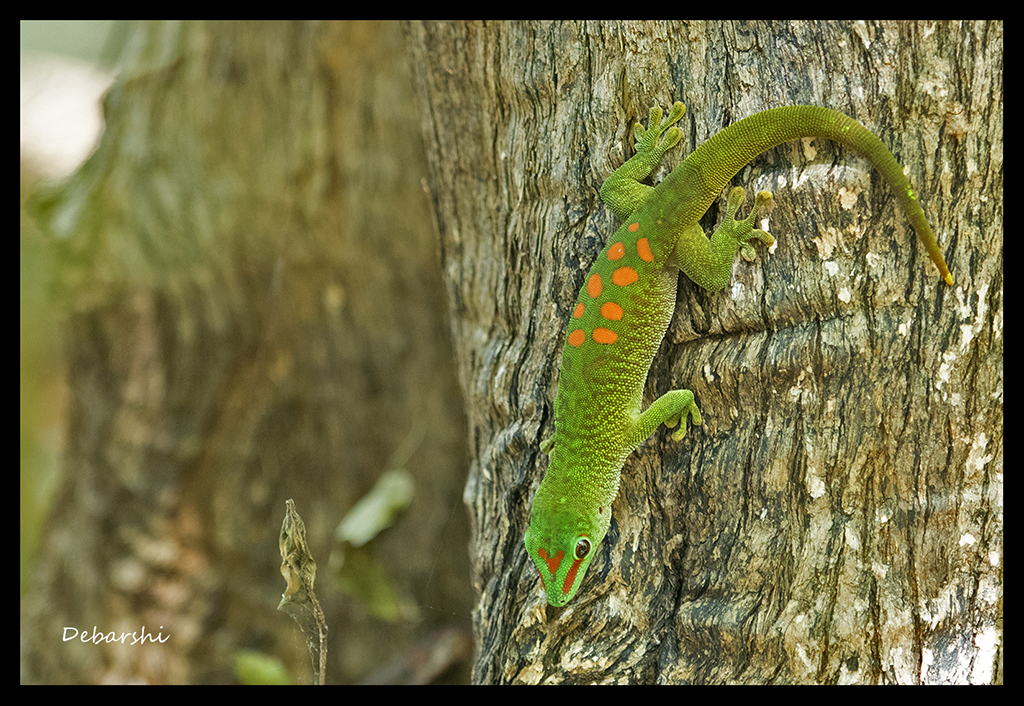 A word of advice for all planning to go to Masoala. The humidity is a constant challenger. Within an hour, we were all drenched completely; not due to the rain but the all-pervading humidity. Truly the Tropical rain forest.

Ely also showed us various trees as well – the hard wood trees of rose wood and ebony , the canoe tree – one from whose trunk canoes are made , the torchwood tree whose resin is used in making incense. With medical facilities being expensive and difficult to reach in this part of the world, people mainly rely on herbal cures. Stomach ailments are the main diseases, hence you have diarrheal remedies made from Kildo or Tsy maky asotry boiling the leaves and branches to make an infusion or purgatives made from Vahona or Famonto kely. Ely showed us few of these medicinal herbs, he even showed us a herb one whose leaves are soft and hairy and used as natural toilet paper!

The night walk on the grounds of Chez Arol

On both nights in Masoala, we went for night walks in the adjoining grounds of Chez Arol. The vegetation here is also Rain forest terrain but much less denser than the National Park. It is important to wear Headlamps and also carry torches with good lumen. It serves the dual purpose of illuminating your path as well as providing for your unforgettable photograph. A good Camera Flash does help, but you have to be careful so as to not startle the nocturnal animal. 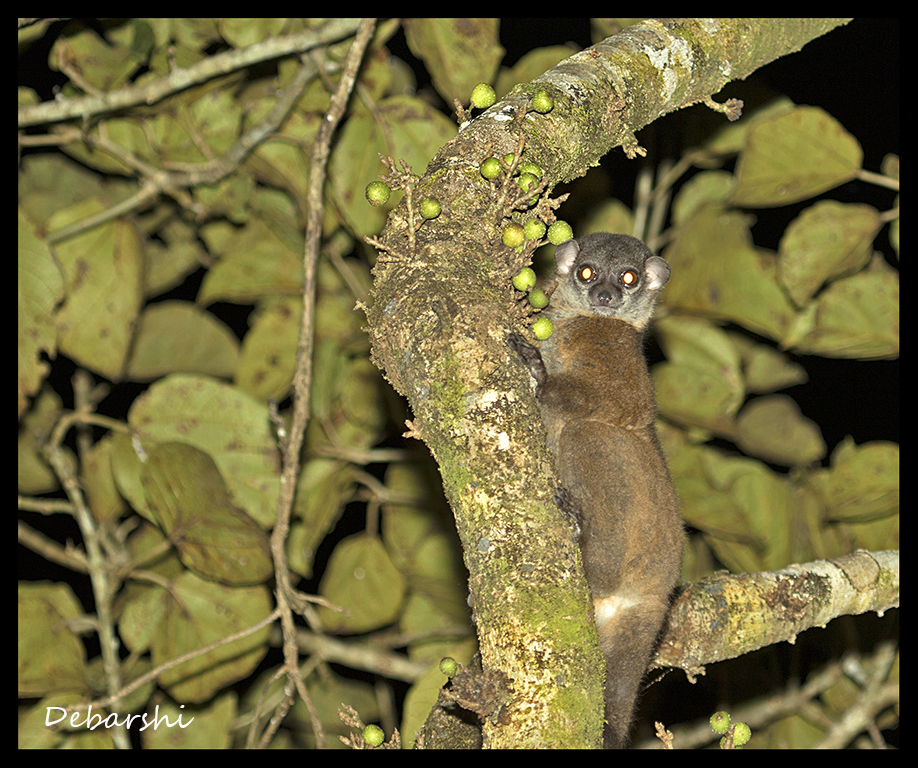 Ely spotted an Eastern Sportive Lemur within the grounds but it immediately hid amidst the foliage. The mouse lemur also gave us a glimpse and hid. In the forest we spotted a family of Masoala Woolly lemurs perched on a tree, tree crabs and a very terrified common field rat. Back at the Chez Arol, we spotted the Sportive lemur and got good clicks of them. 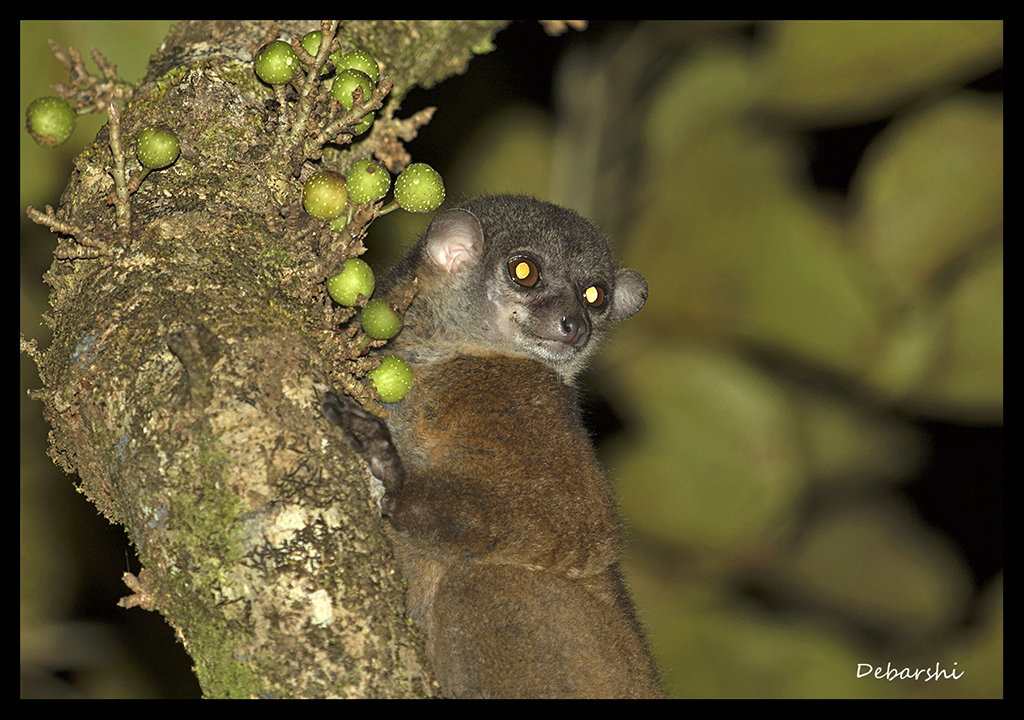 We went for a long walk in the afternoon with Ely. From one end of the Peninsula to the end of the Tampolo Bay . We walked through the fishing village and shot on GOPRO . Soccer is a popular sport here as well

There are some incomplete eco lodges on the coastline. A few have been ravaged by the recent cyclone. We spotted the Caspian Tern and Madagascar Pratincole perched on the rocks far away .

Where the forest meets the sea in Tampolo Bay

We crossed quite a few rivers and mountain streams flowing into the sea as we walked on the beach.

Thankfully we were wearing our water resistant comfortable crocs loafers and shorts. We waded thigh deep through the streams and picked up some large sea shells. The afternoon was sunny and our walk was pleasant. But we carried our rain ponchos lest it start raining suddenly. It took us almost an hour to reach Masoala Forest Lodge. We walked for another half hour to reach the land’s end .

The folks in Tampolodge invited us for coffee. We sat there alongside the gurgling mountain stream admiring the views.

On our way back, we stopped at the Masoala Forest Lodge to buy Polo Shirts – Eyes of the Forest and Lemurs. We met the young American manager and his Portuguese girlfriend. They had been met in Madagascar during their Peace Corps tenure. They mentioned that Masoala enchanted them to return. 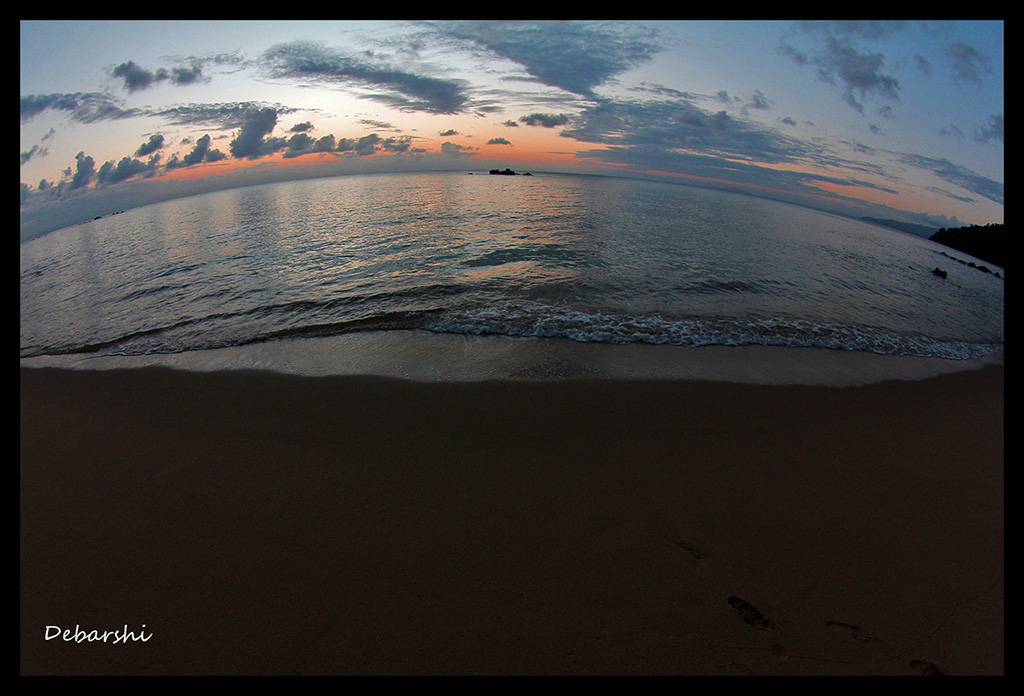 We left at daybreak at 5 am. It was still dark, and we prayed that it would not rain.

We saw a fisherman family of four and an infant boarding a wooden canoe to go to Maroantsetra. They would row for 8 – 9 hours taking turns between the father, mother and the elder son. Our heart went out to them! But we could not give them a ride because they needed their canoe to return to Masoala as well.

No sooner did our boat ride begin, the skies came down upon us with torrential rain and gusty winds. The Red Lemur started tossing like a match stick in the swelling waves. We were wearing rain ponchos and life vests but it seemed to be our last day on earth.

And our toothless captain thought best to steer the boat faster in these rough seas. The force of the rain slowed down near Nosy Mangabe. We sailed around the island reserve Nosy Mangabe and saw a few fishing boats . We were soaked to the skin by the time we reached Maroantsetra.

Ely helped us in unloading our luggage and took us in yet another ramshackle cab to the Masoala Resort. There is another good resort Hotel Relais Du Masoala . The management has changed , thus maintenance and service have taken a beating.

Masoala Resort has wonderful sea facing cottages and comes with an in-house masseuse. We seemed to be the only guests in the hotel, another single female tourist came in later in the evening and took the flight with us the next day.

The service in the hotel is very relaxed. The bell boys showed us the endemic Madagascar Tomato Frog (Dyscophus antongilii) near a shallow pool in the gardens. 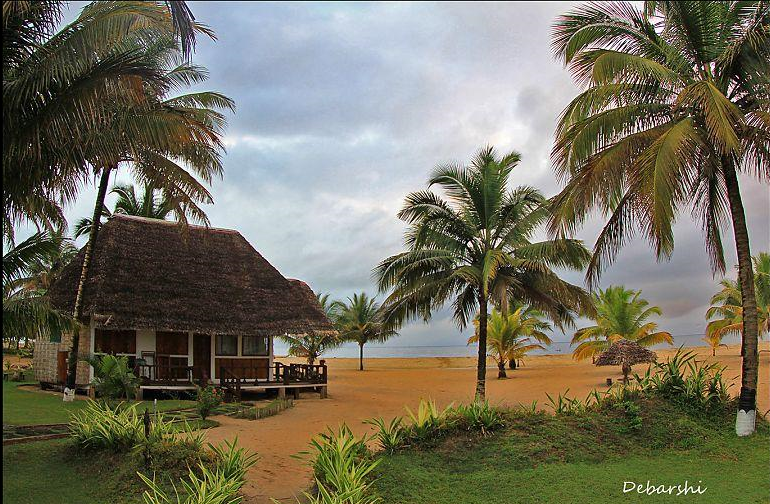 Our Cottage in the Masoala Resort in Maroantsetra 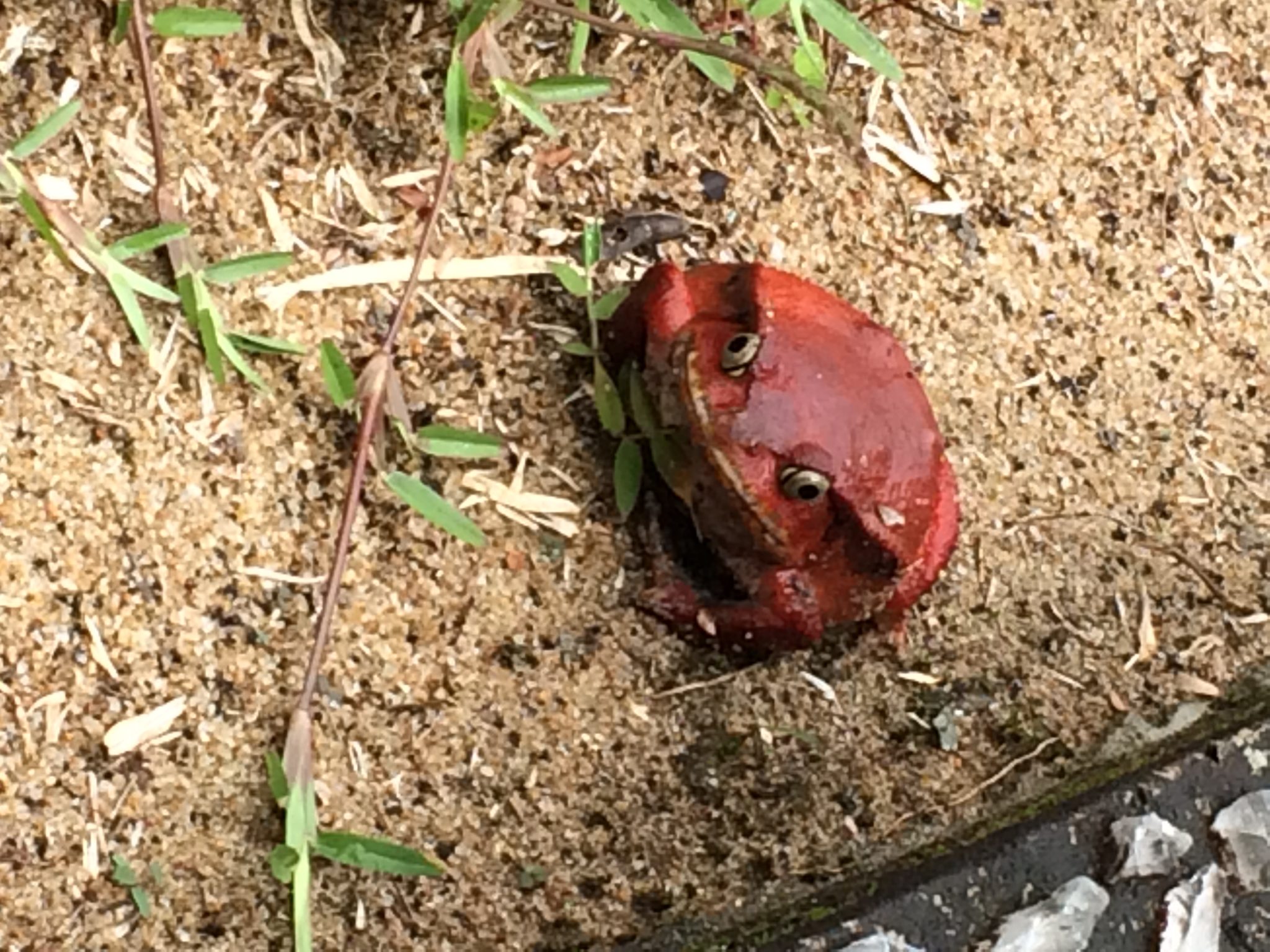 Ely told us that he lived near our hotel with his wife and 3 sons, the youngest an infant . He met us in the afternoon for a walk around town. He showed us around town and we met some of his close friends – rich Burhani traders settled in Maroantsetra for generations. Then, he took us he to the vanilla packing factory.Vanilla is the second most expensive spice today . Above all , most of the vanilla in the worlds grows in Madagascar and is processed and exported globally. 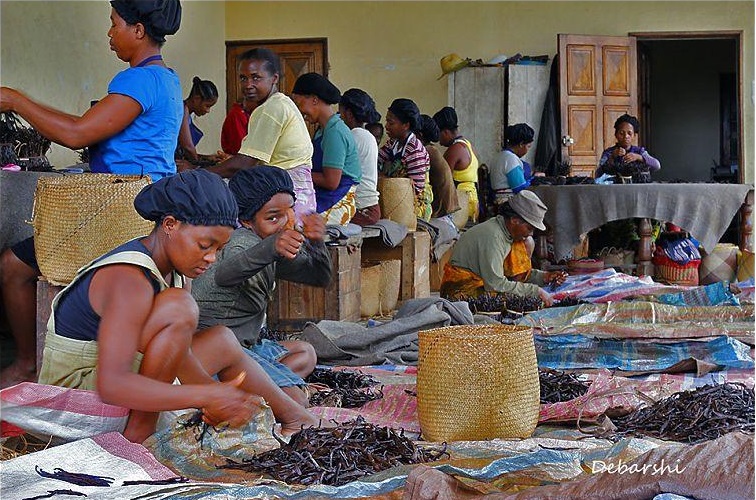 The roads in the town are not tarred, just sand filled paths which become muddy with rains .We also met Olivier riding around in a monster bike. 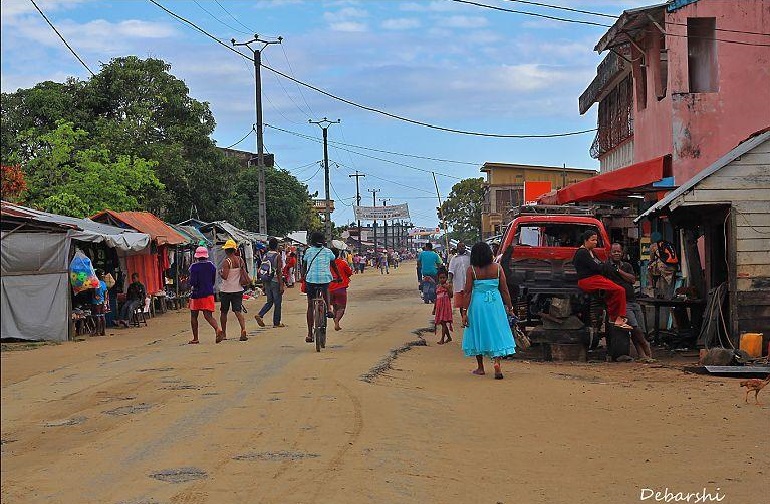 We met another group of tourists in the handicrafts market. They were to return earlier . But the flight from Sambava to Tana could not land in Maroantsetra due to poor visibility .

Thankfully , the day of our return was very clear and sunny. It drizzled slightly, on the brighter side we also saw a rainbow. The check in counter was not open when we reached the airport making us slightly wary. We also met the group of stranded tourists and Elizabeth & Hans as well.

Soon there was news that the flight would be landing in Maroantsetra. As a result , the airport started buzzing with activity . The airport personnel on seeing the flight in the sky showed the Thumbs up sign to the passengers. We checked in now and the porters loaded our luggage onto the aircraft.We reached Tana on time with all our luggage. 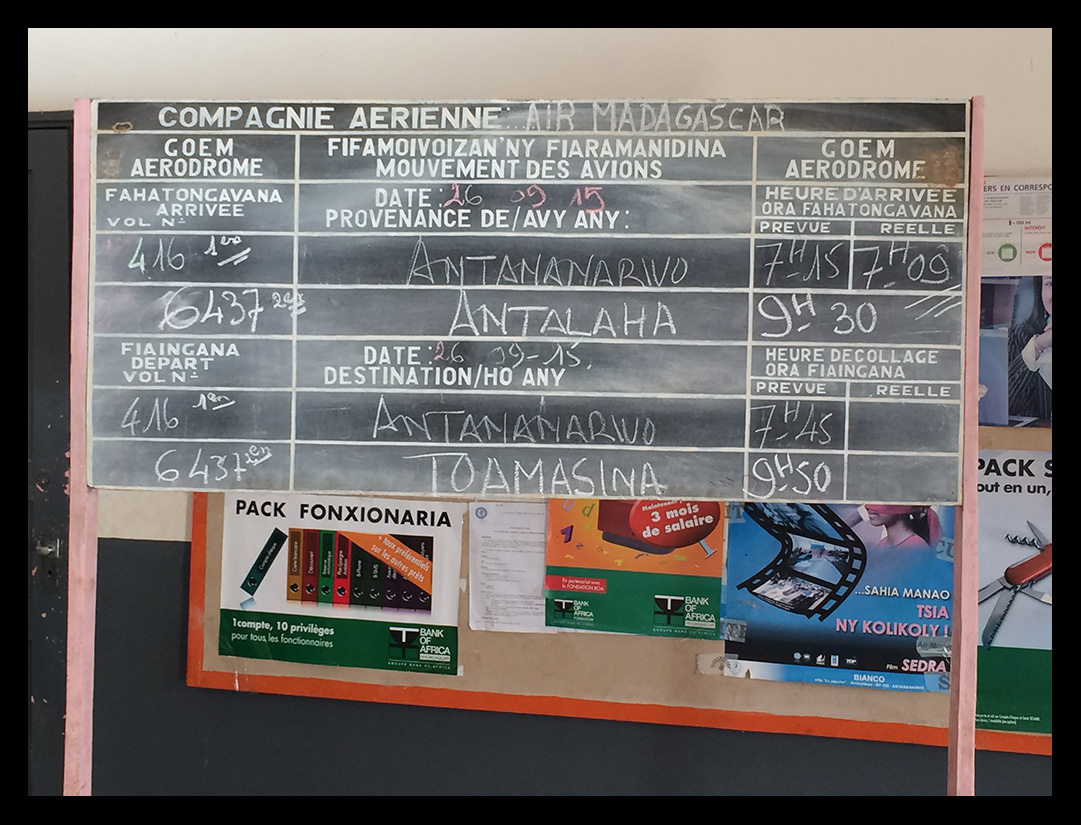 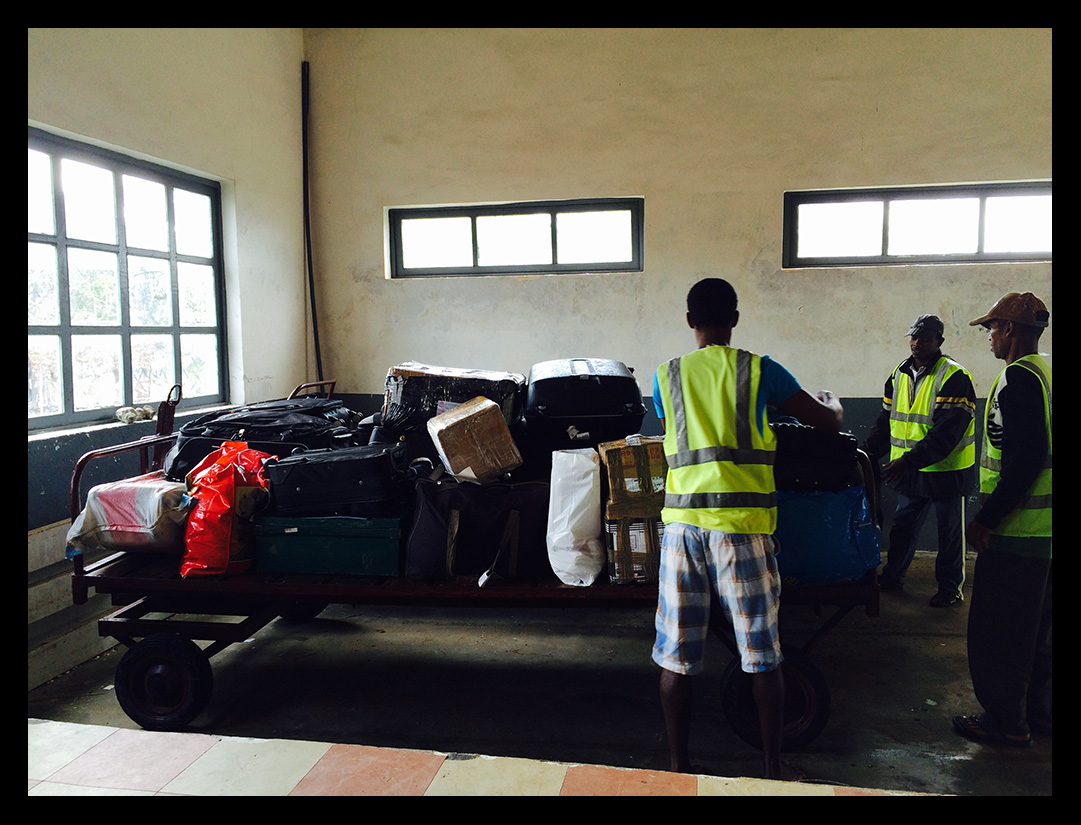 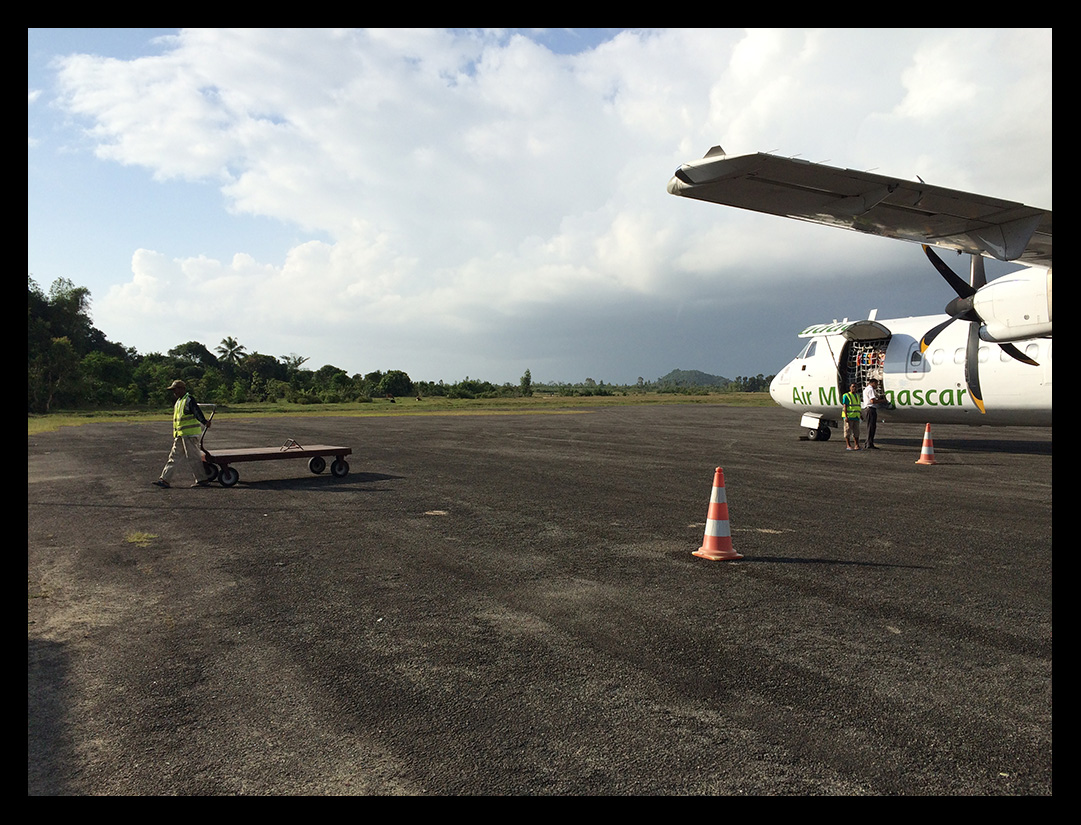 Enjoyed the photos and the information. Hope it never changes.

I enjoyed your story of your visit along with your videos and photos. Thank you.