This was quite a stark change from our previous Masoala National Park experience.

We flew Air Madagascar from Tana to Diego-Suarez. Quite a clean modern airport with miniature conveyor belt and ample parking space and a lot of tourists in the sunny weather. Our English speaking guide, Joel and French speaking chauffeur, Nono picked us up from the airport in a Nissan Patrol to drive us to Ankarana Reserve and Amber Mountain National Park .

Drive through the Antsiranana province

Antsiranana province is very dry and almost no rains and extremely sunny and hot. The forest cover is dry deciduous. Soon we spotted a green chameleon in the middle of the road crossing to the other side! We crossed some small villages on the way and saw the land quite barren. Forests had been burnt down in large tracts to create farmland. They stopped at a village for lunch with crocodile meat at Chez Tonton and Joel regaled us with a folk tale of how a nearby lake came to be filled with crocodiles. 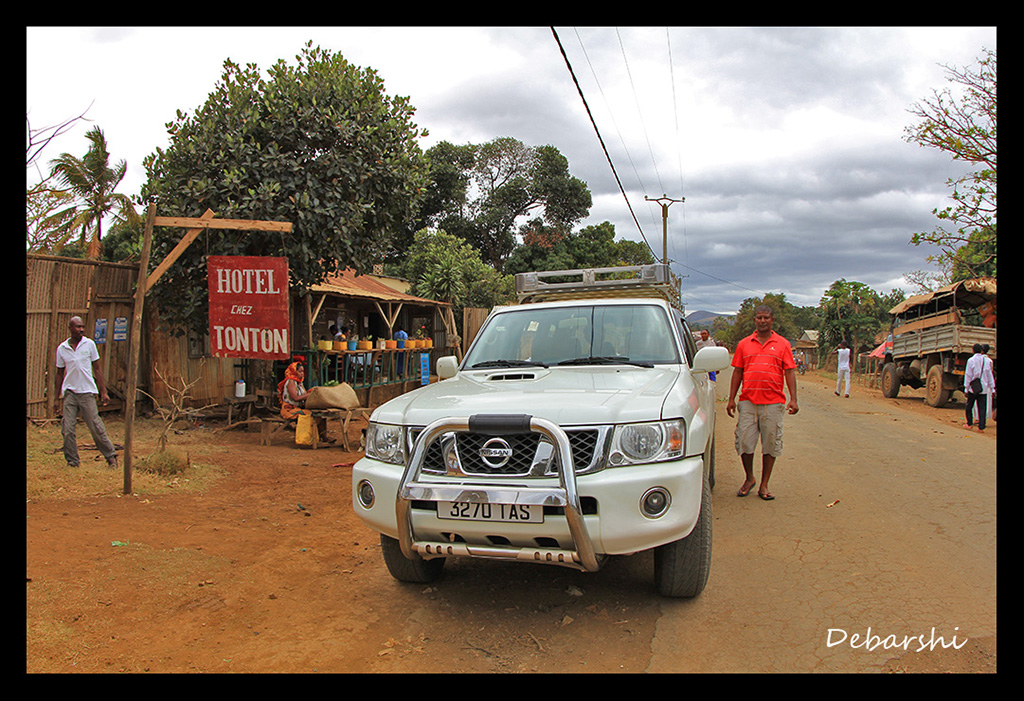 On the way to Ankarana Reserve from Diego-Suarez Airport

We reached the Ankarana Lodge in Parc National de l’Ankarana in about 4 hours. We stayed here for the next two nights. The lodge is like an oasis with green trees, cool breeze and an inviting blue Piscine (swimming pool). The restaurant is set up around the swimming pool with dinners being very comfortable affairs. It is also very near to the Park Gate and easily accessible. 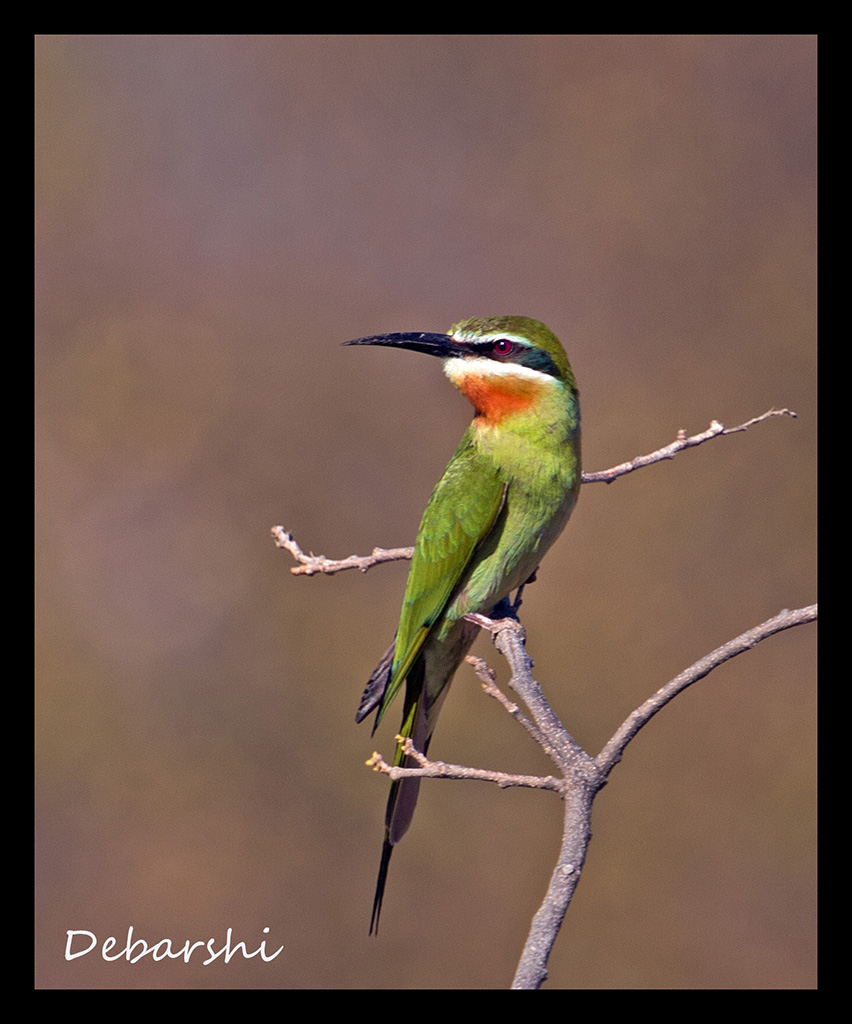 Once again the chef here is worth a mention. The French influence on Madagascar was really showing up in the cuisine. Such a delight for us! We had lovely T bone Steaks, Devilled Crabs, Shrimp cooked Malagasy style and sinful French desserts in the Lodge.

Green Pigeon At the Ankarana Lodge

The rooms are nice and airy with a sit out porch and arm chairs .White mosquito nets adorn your bed. Although there is air conditioning in the rooms, it runs only for a few hours. The pool is very inviting and we spent the afternoon sipping beer in the pool. 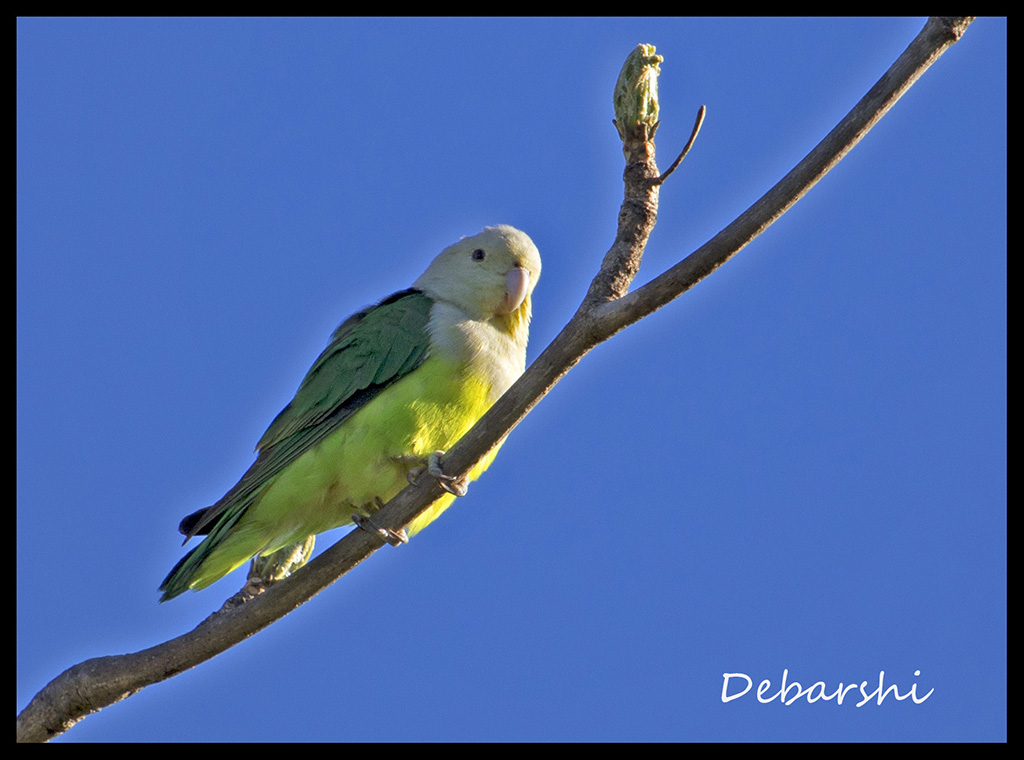 When a drongo fooled us and alarmed the love birds

With lots of trees around the place, Debarshi went looking for birds to click around 4 pm. He soon returned with a hilarious occurrence. There was a pair of Crested Drongos in the lodge; they keep following each new guest coming in. Drongos can imitate several animal & bird sounds. A swarm of Madagascar Lovebirds were returning to their nests with the sunset. One of the drongos, a rather impish one sat on the paved pathway and mewed like a cat to alarm them. The lovebirds were alarmed and fluttering around their nests. We heard him again the next evening. We checked to find out from the hotel staff that indeed there was no cat nearby and it was indeed the drongo! 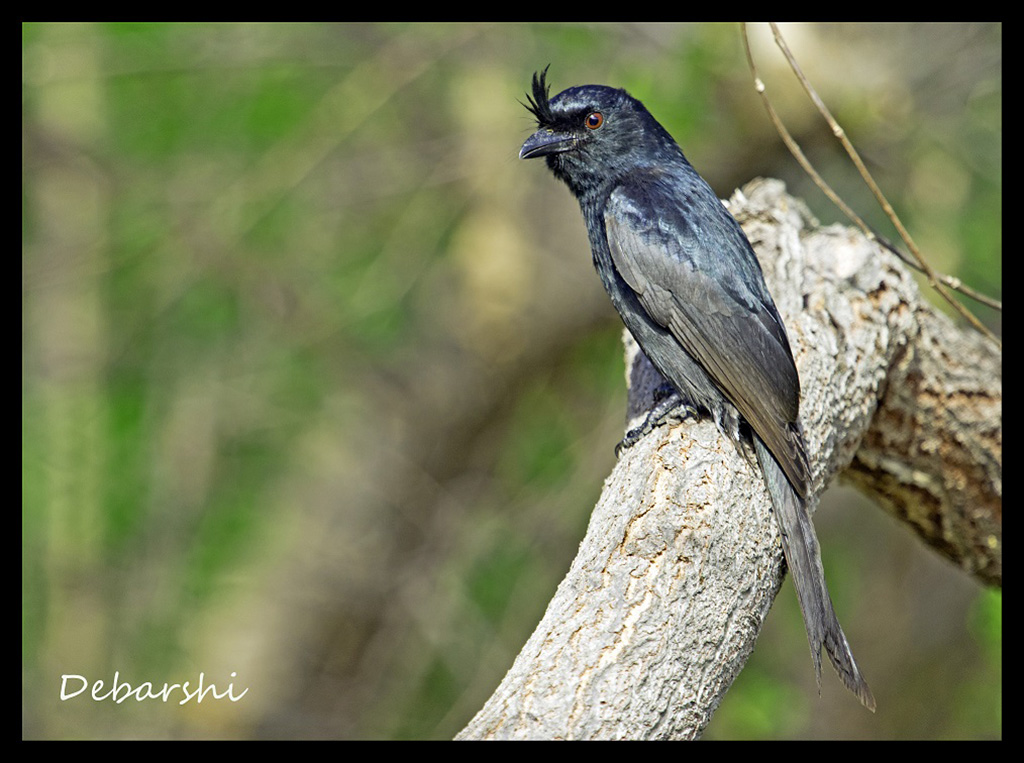 The plan for the morning was a 10 km of walk to the Grands Tsingy and suspension bridge stopping at some more notable lookouts to the Tsingy.On the way we also spotted chameleons and a resting Sportive Lemur. 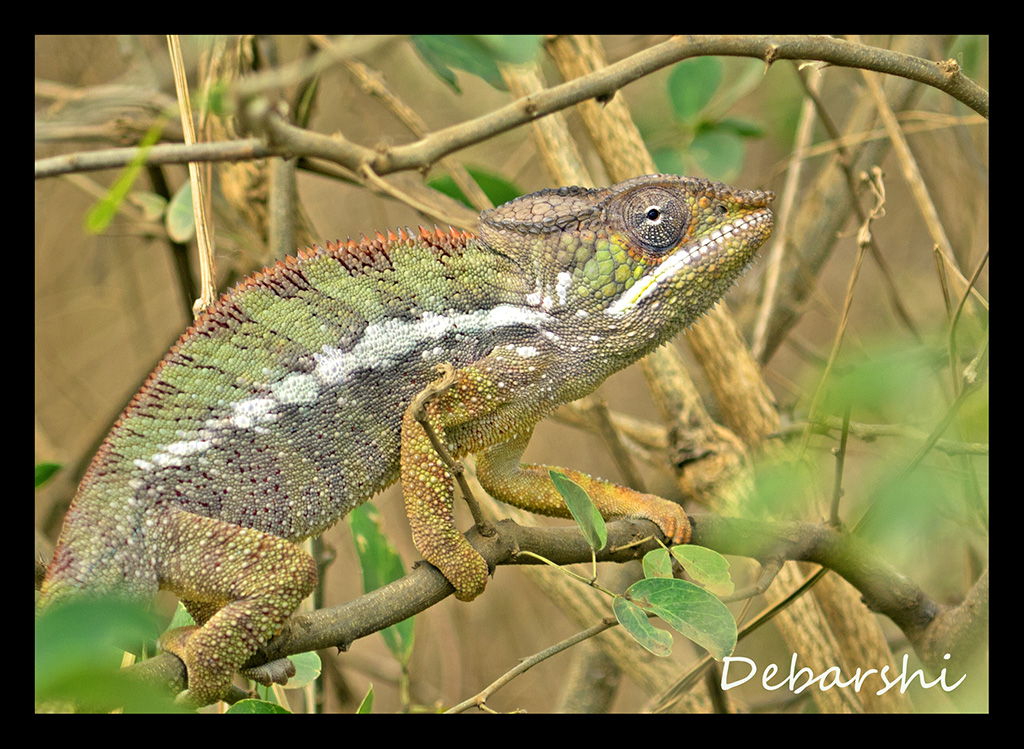 Tsingy are spiky pointy limestone pinnacles amidst dry forests. They were formed due to erosion millions of years ago and offered a natural barrier to the local Antakanara tribes from the ruling highland tribes of Merina. The word “Tsingy” means to tiptoe since that’s how the tribes had to cross the rocks. 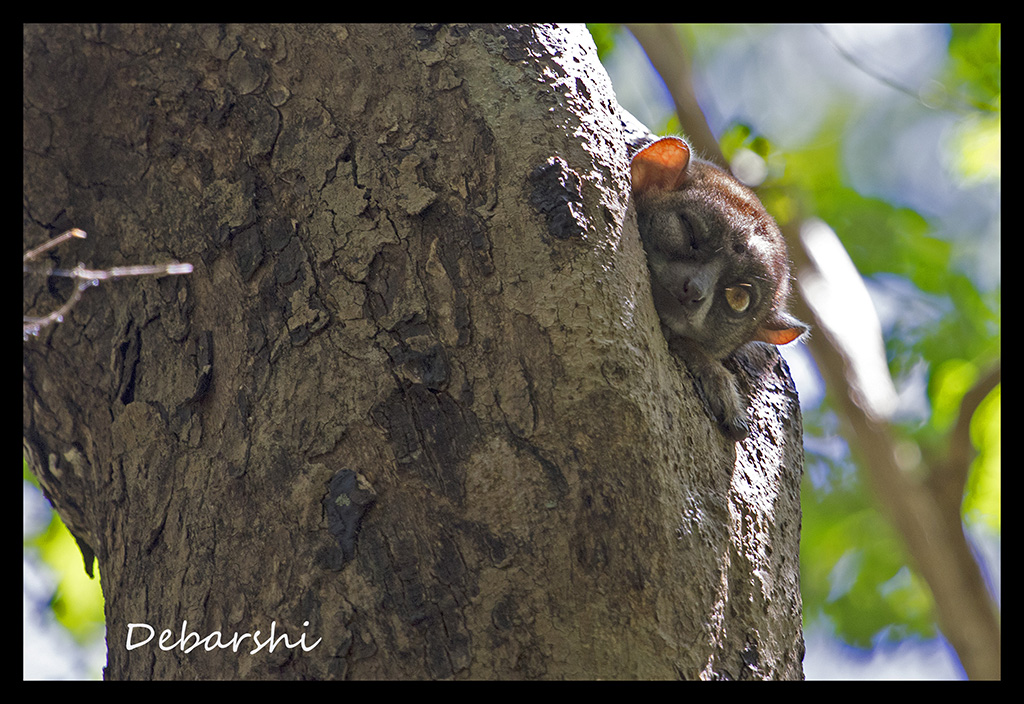 The walk takes you through some barren tracts and then uphill through the forest. We spotted a family of resting Sportive Lemur.

We walked through a dry river bed and came to the Pertes des Rivieres. It is a massive sink hole where three rivers flood the river bed and then plunge into this chasm exiting 20 km later into the Mozambique Channel. 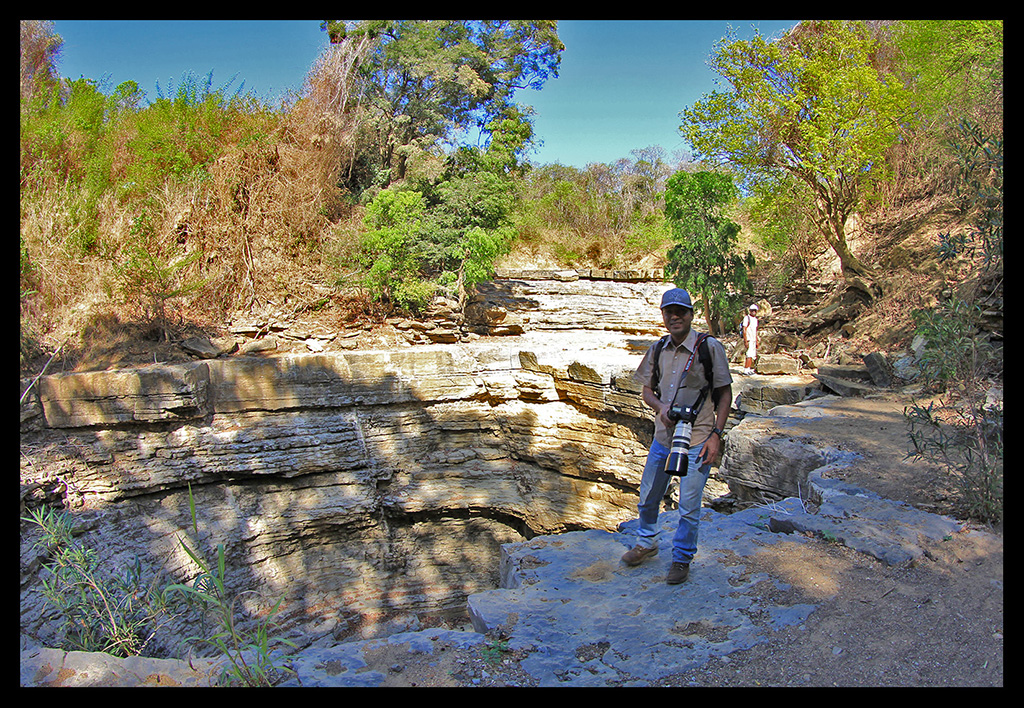 Then we came to a lookout to the Petits Tsingy, where we saw the massive karst topography of limestone pinnacles. 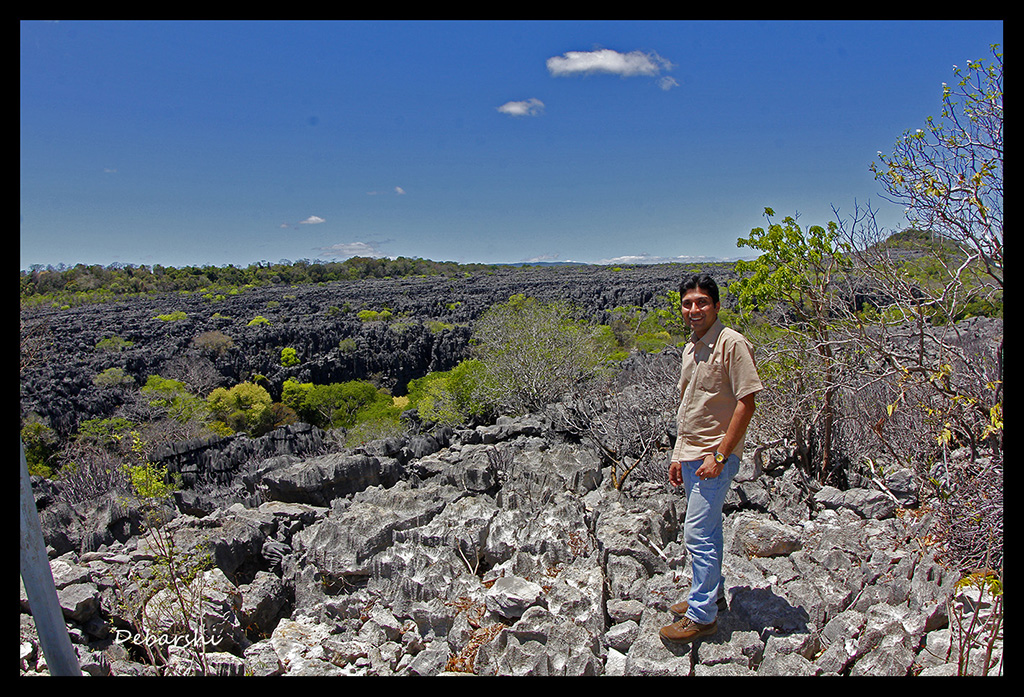 We reached the Grands Tsingy and then crossed this huge terrain to reach the suspension point.The sun was blazing and Joel helped me with my camera and binoculars. Crossing this terrain somehow seems like walking over alien surfaces like the Moon or Mars. In some places, you balance on rocks just the size of feet with deep gorges or walk tight fit between two rock walls. Just when you feel you have reached, you realise you have to still walk more to reach the highest viewing point. But the view from there is unparalleled.

Tips for the Tsingy trek

Although the walk is not difficult, the sweltering heat and mosquitoes are a real deterrent. So I thought of putting down some pointers.

Lunch at the Ankarana Reserve

I trudged my way back thinking that the campsite was just after the Tsingy while Debarshi seemed to be quite at ease. But it was another 1.7 km after crossing the Tsingy through the forests. Nono had set up picnic lunch from the Chez Aurelien. On seeing how drained we were, he ran to us and offered cold drinks. The mosquitoes were still after me , so I applied a fresh layer of repellent. The picnic spread was lavish – chicken salad, sautéed vegetables, chicken in coconut milk and crabs in Malagasy style with luscious ripe mangoes for dessert. 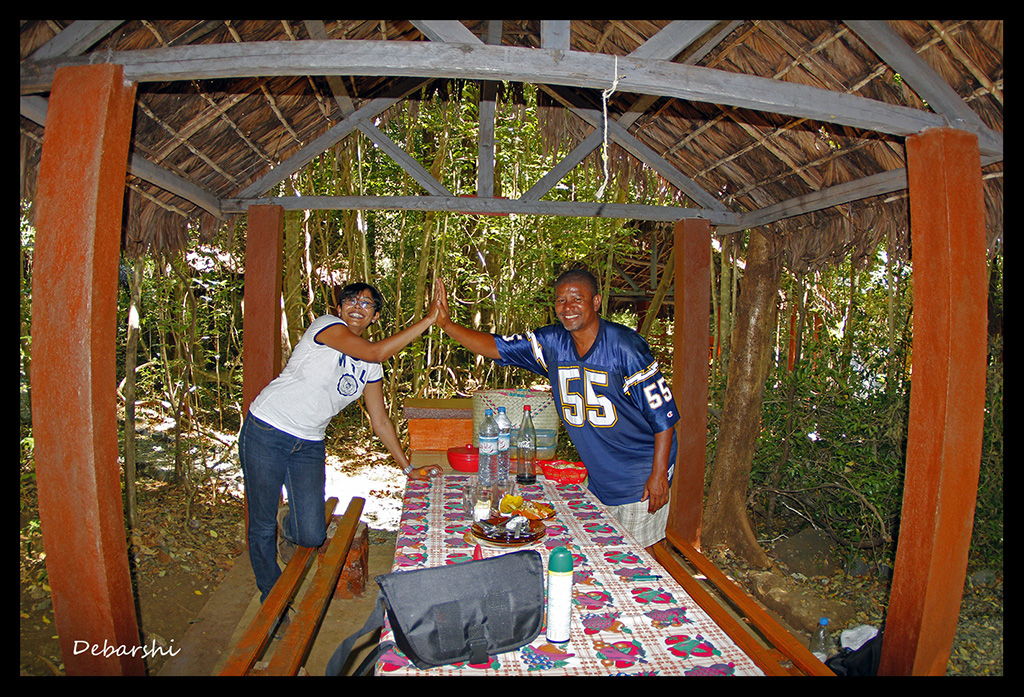 After lunch and some rest, we planned to explore the famous caves beneath the Tsingy. Beneath the Tsingy is a whole wonderland with forest filled canyons and cavernous streams. We trudged through the forest then down the mountain then climb down 165 large roughly hewn steps. We carried head lamps and torches while entering the Grotte des Chauves-Souris or Cave of Bats. 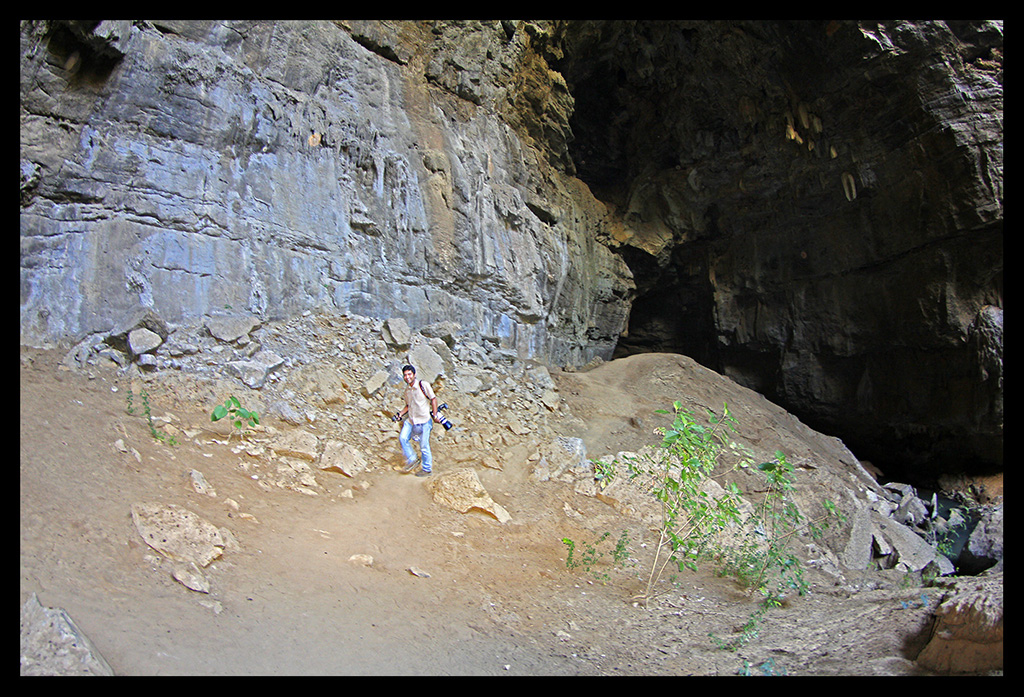 There are two trails to go inside and you can spot various species of bats – small and large ones. Often we stopped or crawled through the caves and crossed the subterranean river streams flowing through. We thoroughly enjoyed the walk despite all the stooping crawling through the bat droppings. Joel just warned us to be wary of our steps and watch out for scorpions. 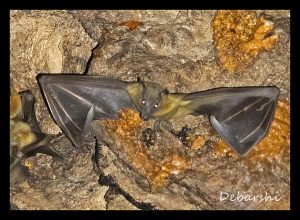 Just an advice. You can avoid the caves if you are claustrophobic or terrified of bats or have knee problems.This was a highlight for us in the entire Ankarana Reserve and Amber Mountain National Park tour. 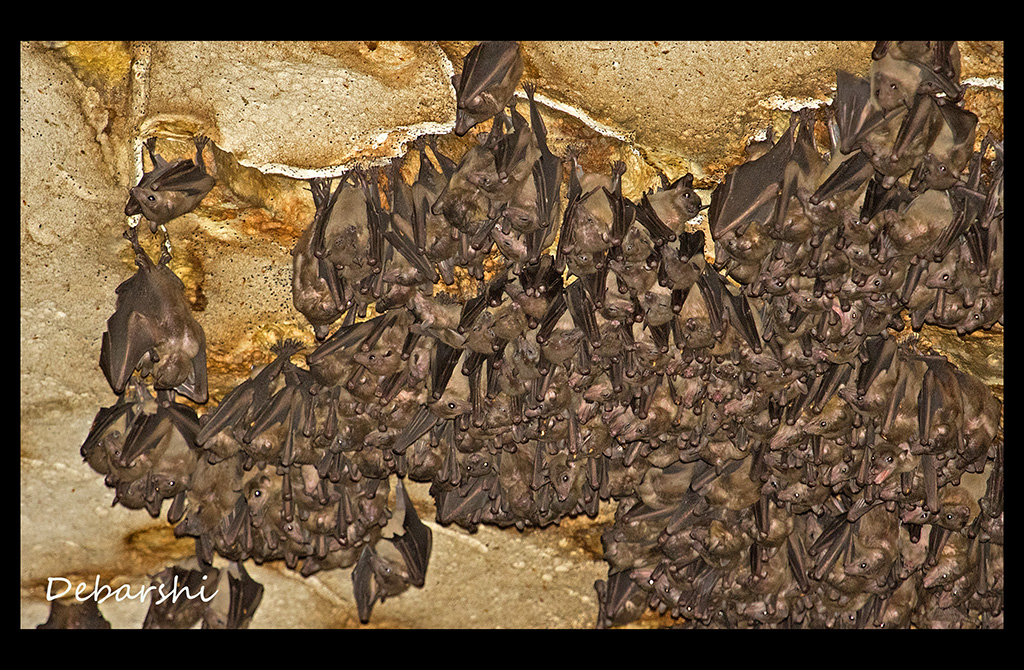 The next day we visited the Tsingy Rouge or Red Tsingy on the way to Amber Mountain. This is about 60 kms from the Ankarana Lodge and well worth the detour from the tarred road on a mud road with a cool off-roading experience. On both sides, we saw the various attempts if the villagers at re – afforestation with Eucalyptus trees. 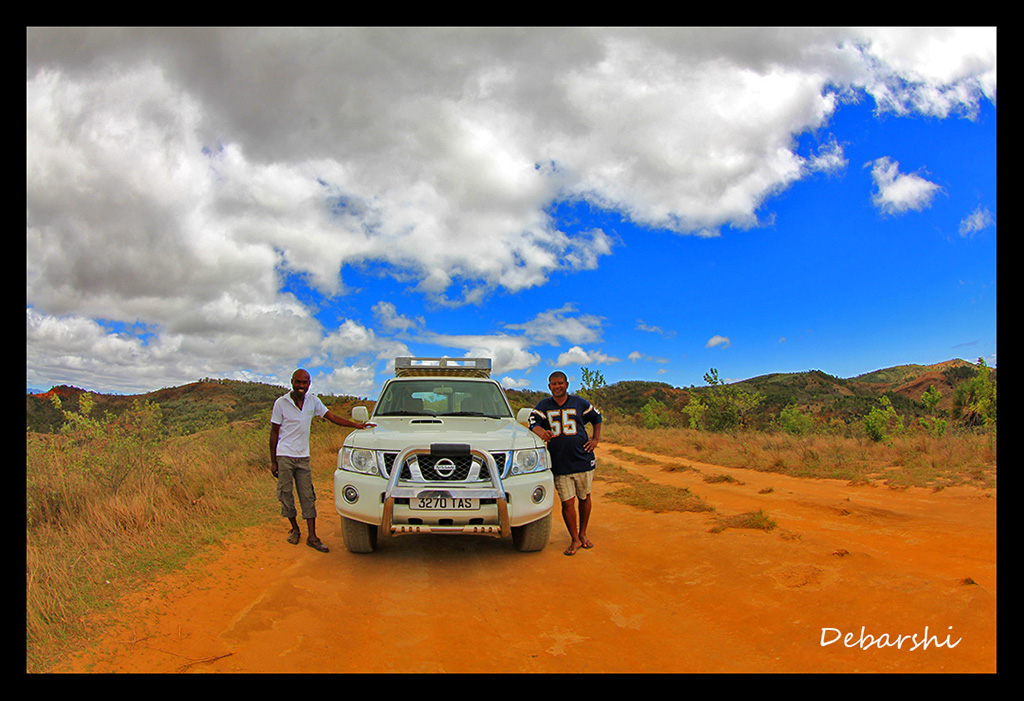 Tsingy Rouge is a stone formation of red laterite formed by erosion of the Irodo River. This was uncovered by the local villagers during deforestation when the river washed away the upper soil. Now they are determined to stop further damage and have launched many preservation steps. 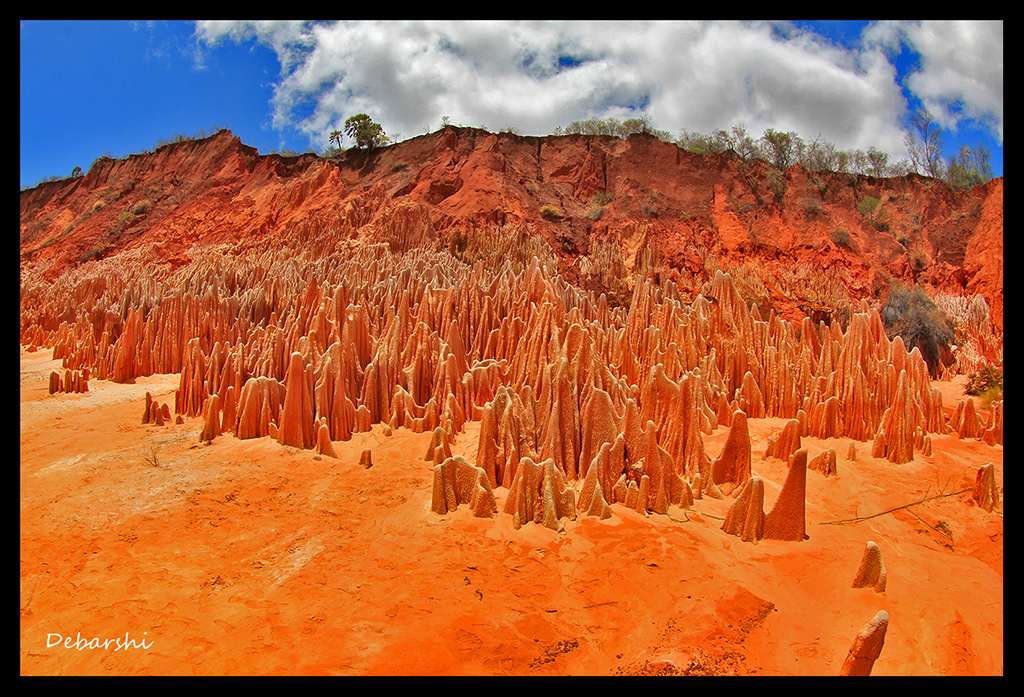 A hand made fence separates the visitors from the Tsingy Rouge. A villager is always on watch from the hill top. You cannot cross the boundary or touch the Tsingy. 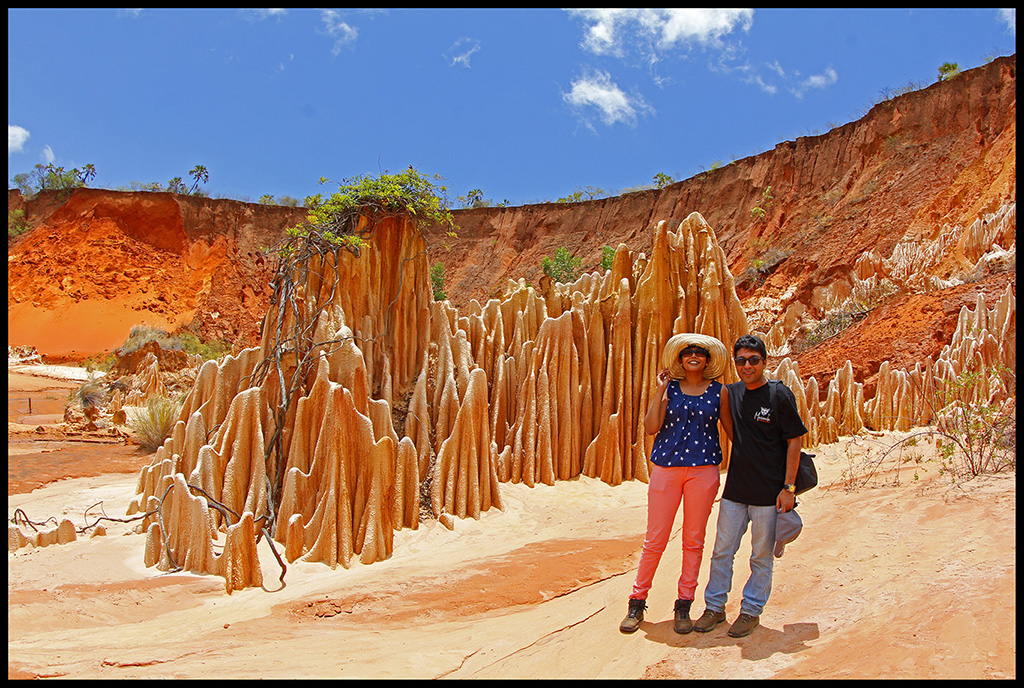 This marvel of nature has all possible shades of Crimson, Violet, Yellow Ochre, Amber and even some tinges of Ash Gray as you walk past them.

This park is known for its endemic species like the Amber Mountain Rock Thrush (Monticola sharpei erythronotus). Amidst the dry regions, this mountain is covered with rainforest with trees as high as 40 – 50 meters and lianas, orchids and ferns. This park is also known as its local name Montagne d’ambre. 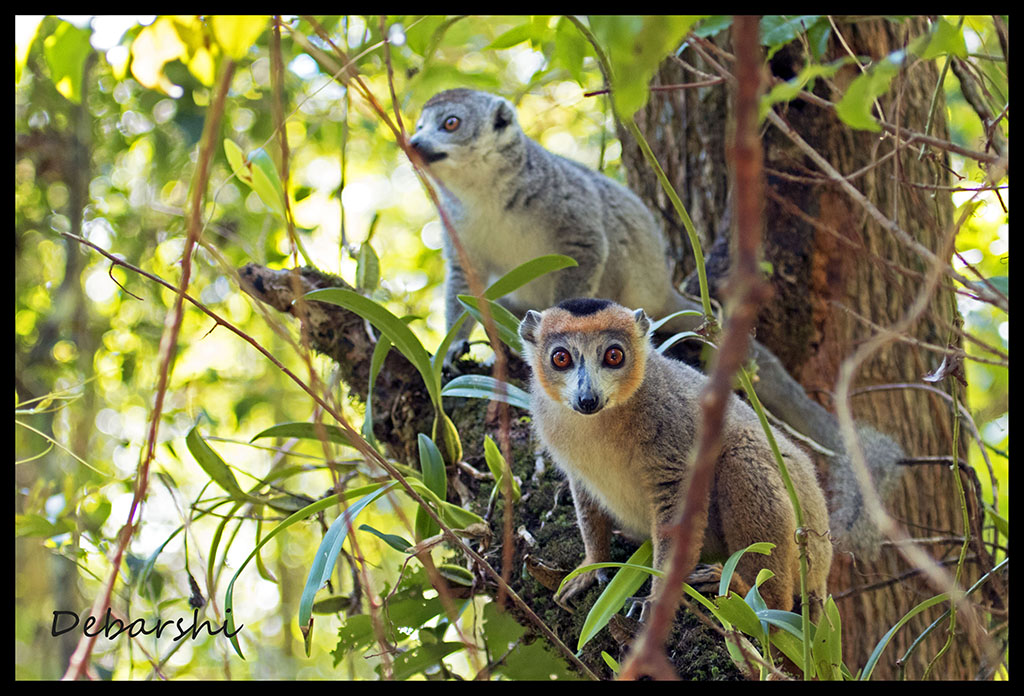 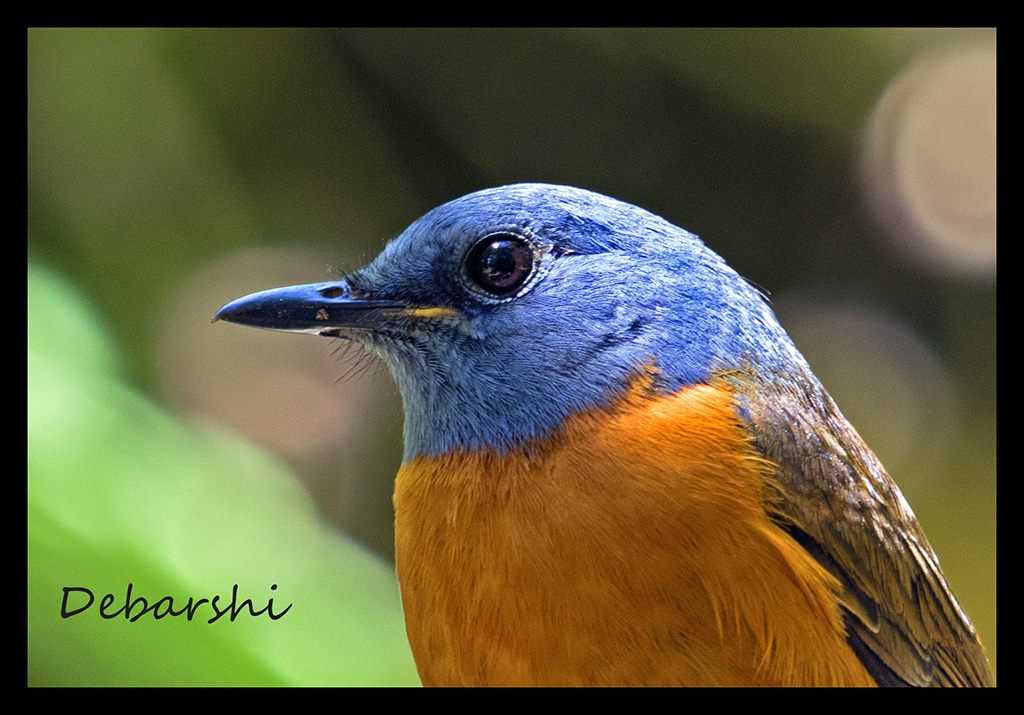 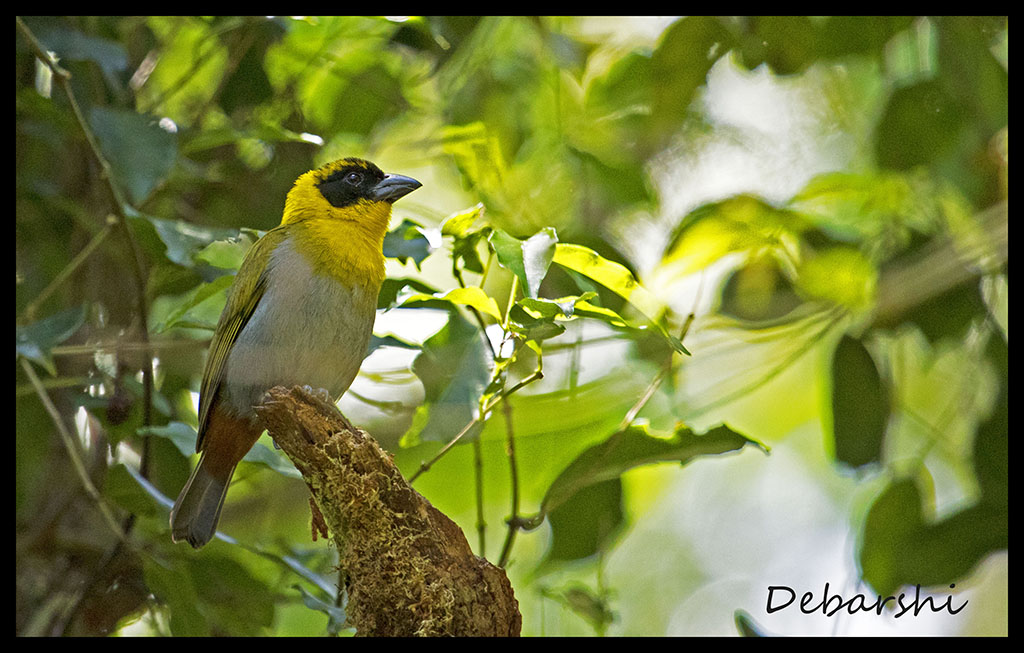 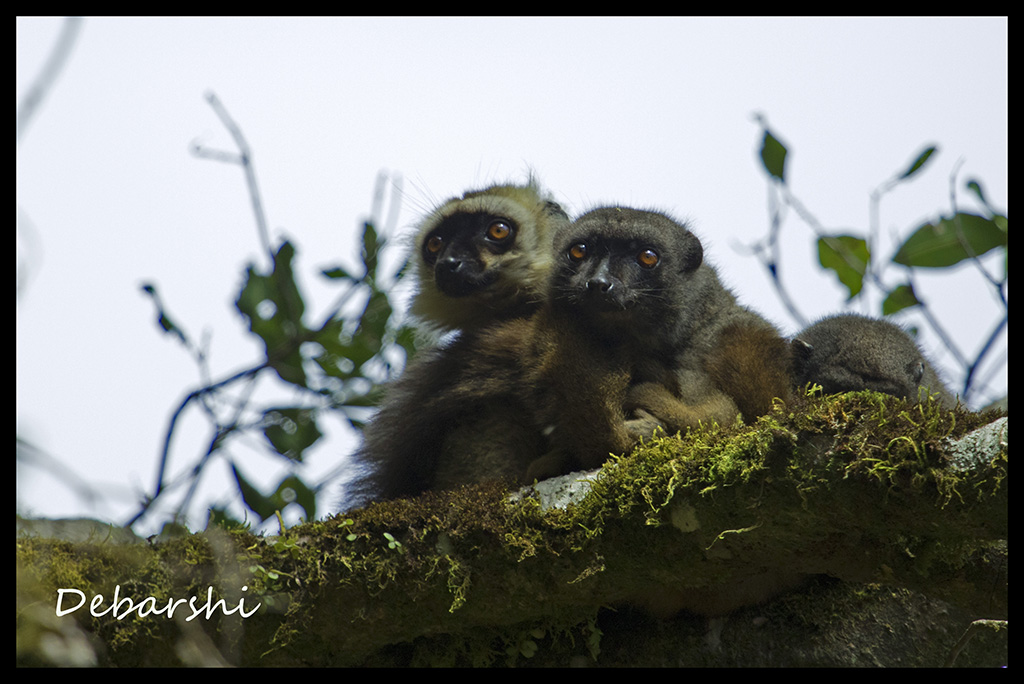 We walked through the National Park trekking up or down hill. Although it rains almost daily here , we were blessed with good weather neither rain nor very sunny .We spotted families of the Sanford lemur, Crowned Lemur and the endemic Rock thrush.

The Amber Mountain Nature Lodge is in the town of Joffreville which used to be an Army Barrack. There are about a dozen individual large wooden cottages on stilts with large four poster beds  with mosquito nets. The rooms have heating with an evening turn down service.There is a large sit out porch to admire the sunset. We also saw several bird species, a large Kite came and sat on the trees right in front of us. 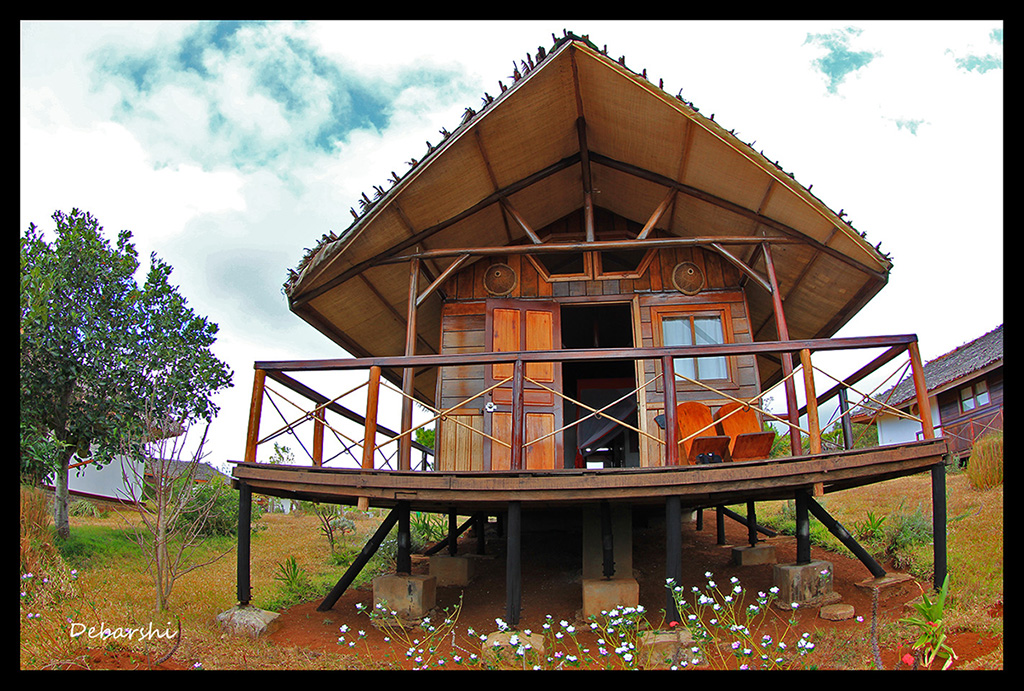 You can walk down the illuminated stone pathways to the bar with restaurant and reception .The service and the staff is really praiseworthy. They put up the dinner menu on a hand written board and have a good selection of wines. 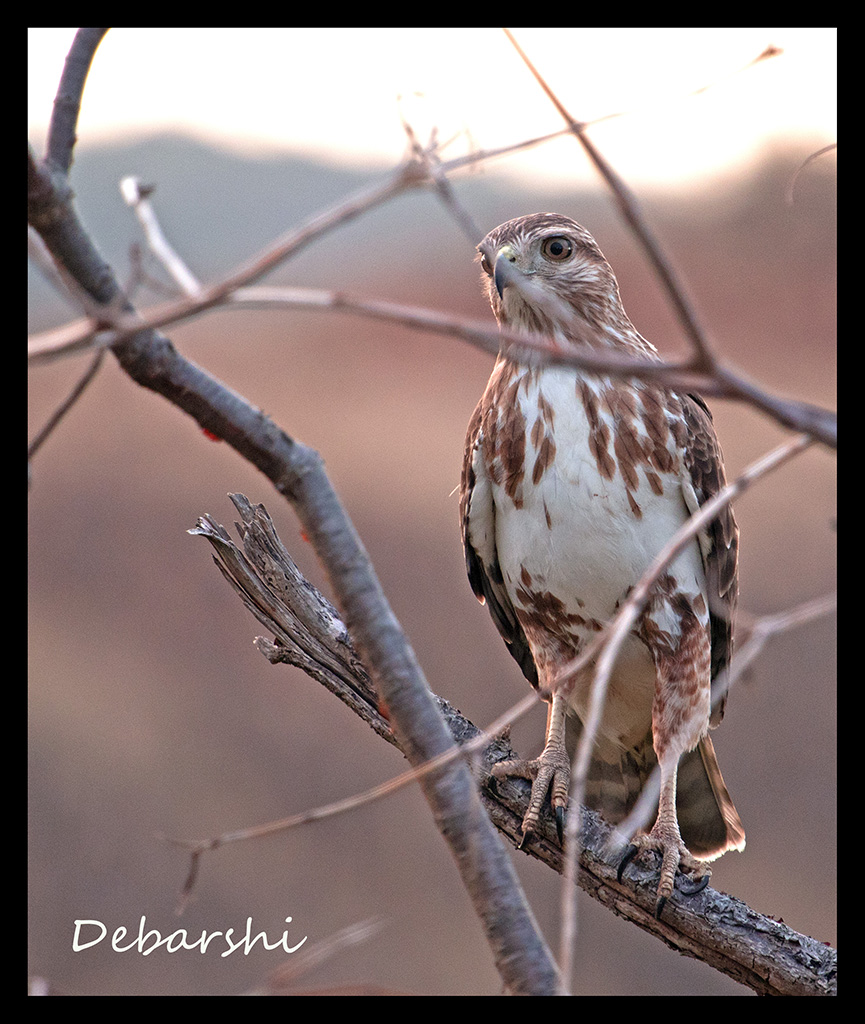 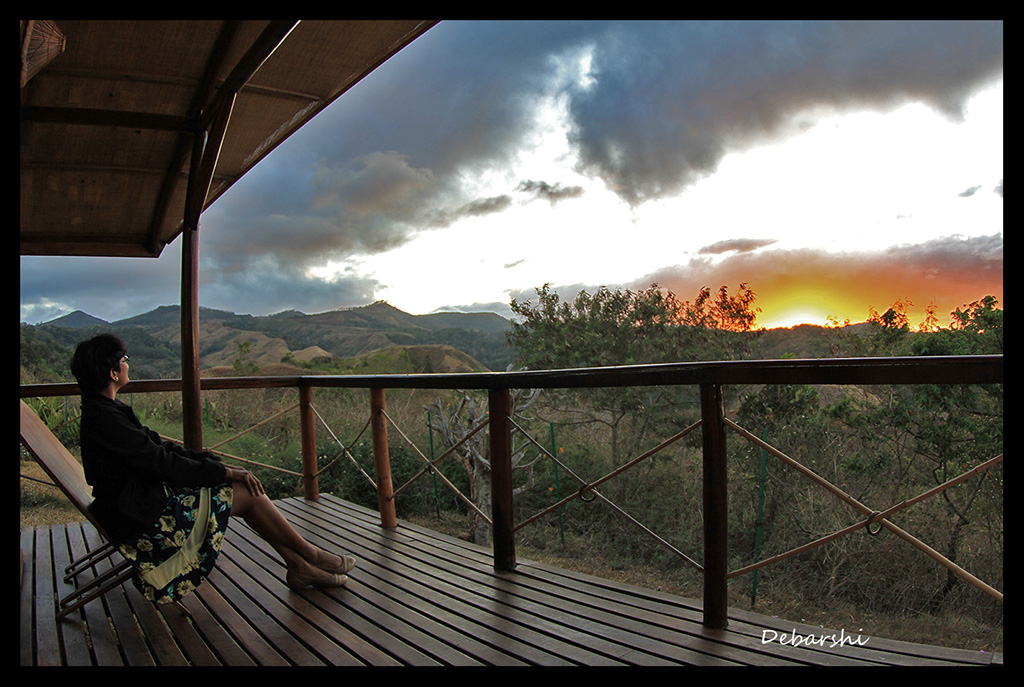 The seaside town of Diego-Suarez is the most important one in North Madagascar with a lot of old colonial style buildings. This town is mainly used for connections to Ankarana Reserve and Amber Mountain National Park .But ,the city is quite laid back. All shops and establishments even banks close at noon till 3 pm for an afternoon siesta. We had been enjoying THB or three horses beer throughout and were glad to know that their bottling plant is just on the outskirts.

Diego is also a well known port . Many cruise liners stop here with hordes of tourists. There is also a lighthouse at the end of Rue Richelieu.

We went out for a walk on the main street. Lots of curio shops selling trinkets and clothing line the street. You can also get gift packs of vanilla or pepper or cloves.

There are many noteworthy places to stay like the Le Jardin Exotique or La Terasse du Voyageur. We wanted to stay right in the city centre. Le Grand has large very plush comfortable rooms. The pièce de résistance is the swimming pool designed with tropical plants and loungers deck along with a good in-house spa. The dinner is an open air barbeque where you can choose various roasts or steaks. Breakfast is an equally lavish spread with multiple sections of breads, meats, fruits, preserves, cheese. The beverage section had multiple selections of tea and coffee and juices.

Unlike the other parts of Madagascar, Ankarana is rocky , sunny and infested with mosquitoes and scorpions. A word of caution is to always check your shoes before wearing them. Unknown to you , a scorpion might have made its home in the cool corner of your shoe. Please carry a lot of insect repellents and sunscreen and keep on applying them during your walks. Having said this, it was a remarkable experience for us to visit Ankarana Reserve and Amber Mountain National Park.

Self Drive in China

Self Drive in China – Kunming to Lijiang