I first read about Mohenjo-daro in my Class Six History Book. It left a lasting impression on my mind – The Great Bath, The Dancing Girl, The Priest King. I dreamt of a visit to Mohenjo daro one day, an impossible dream in Class 6. Little did I know that dreams do come true someday.

That dream came true in 2005 when I got the opportunity for a visit to Mohenjo daro. I must admit before hand that apart from my grey cells faltering to recollect some details, the camera equipment used by me at that time has not produced a great result.

Mohenjo-daro is the most prominent archaeological site of the ancient Indus Valley civilization. The word Mohenjo-daro means ‘Mound of Dead’ in Sindhi or ‘Mound of Mohan’.

Today, 1000 sites of the Indus Valley civilization have been discovered.  400 are in Pakistan and 600 in India.

In India, most of these sites are across the western states of Rajasthan & Gujarat, some in Punjab and Haryana namely Dholavira, Lothal and of course, the famous Harappa.

For a visit to Mohenjo-daro we had to travel about 28 km from the small town of modern day Larkana in Sindh province of Pakistan to the west of the Indus River.

It is one of the world’s earliest cities, contemporaneous to the ancient Egyptian and, Mesopotamian civilizations. Evidence has pointed to existence of trade routes between these civilizations. The Indus Valley Civilization flourished around 2500 to 1900 BC and Mohenjo-daro was most important to the civilization. It spread out over about 250 acre

In 1920 R D Banerjee of the Archeological Survey of India first unearthed the remnants of Mohenjo-daro . He identified the Buddhist stupa and finding an artefact there convinced him of the site’s relevance.

This discovery was key to the later held excavations by K N Dixit and John Marshall to unearth the relics of the Indus Valley Civilization. 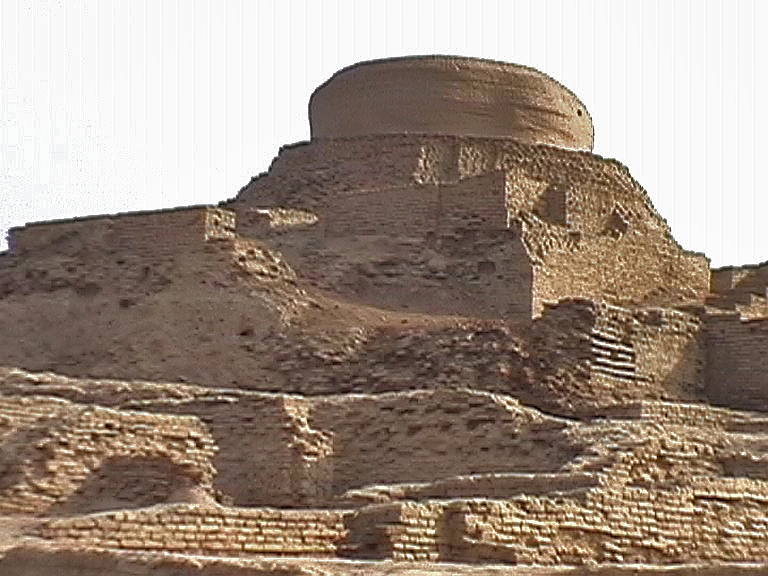 For a visit to Mohenjo daro, the nearest International airport is the Jinnah International Airport Karachi in Pakistan. You can drive down from Karachi which is about 420 km. I also did read that now you can also take a direct flight to Mohenjo-daro.

Our Experience of a visit to Mohenjo daro

I travelled to Pakistan in February 2005 more than a decade ago to Hinglaj and Mohenjo-daro with a Travel Group. Our Pakistani tour operator received us in Karachi. 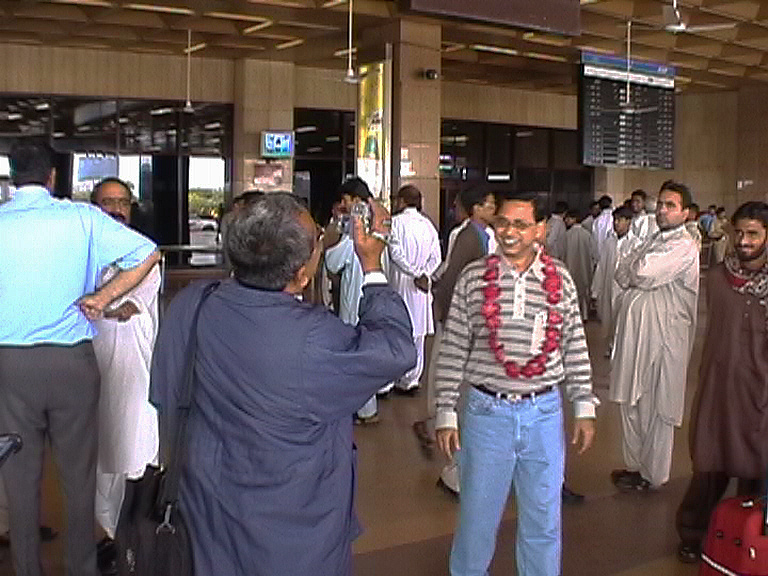 Our first stop was at the UNESCO World Heritage site of Makli Necropolis.It is situated in Maklia close to the Thatta town in Sindh about 110 km from Karachi. This is probably the largest funerary site in the world with more than half a million tombs in an area of about ten square km at the edge of the 6.5 km-long plateau of Makli Hill. 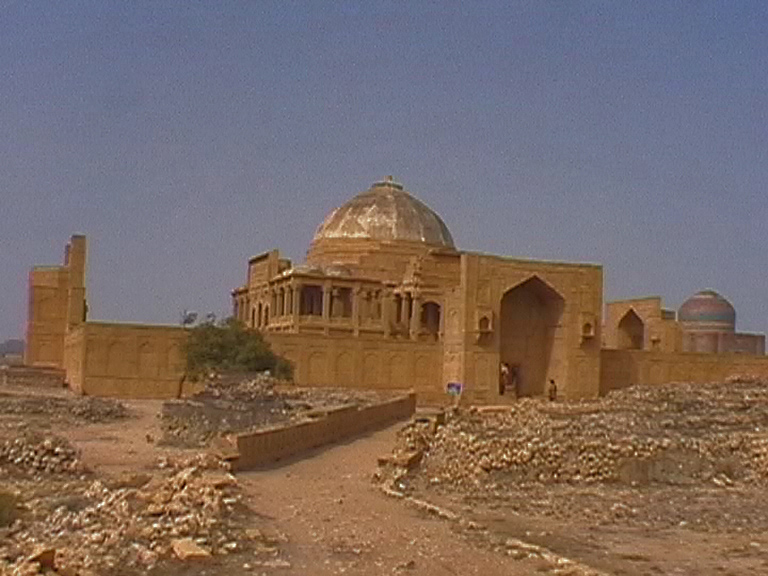 I was astounded at the size and scale of this place and did not even realize how fast the two hours flew. The monuments are fine examples of fusion of diverse influences such as Muslim, Hindu, Persian, Mughal architectural heritage. Kings, queens, governors, Sufi saints and scholars are buried here in brick or stone monuments, with many decorated in glazed tiles. The most colorful monument belongs to Diwan Shurfa Khan. 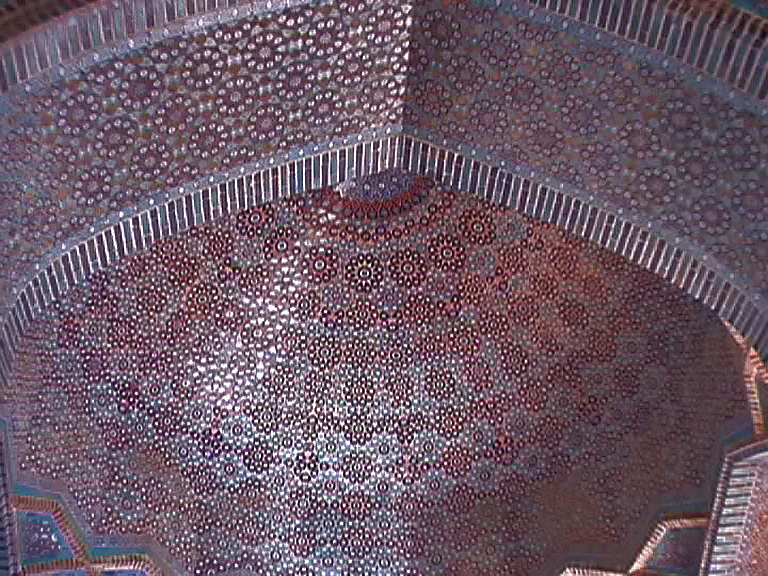 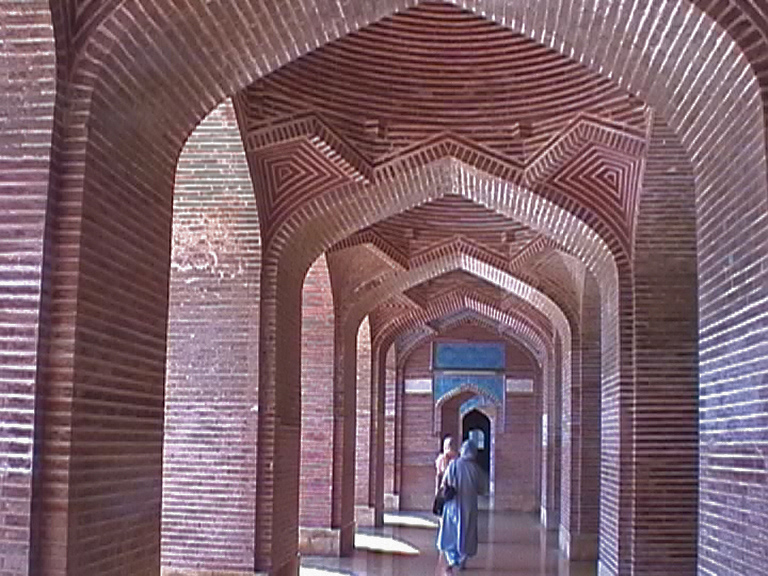 The Makli Necropolis affirm to the flourishing civilization of Sindh from the 14th to the 18th centuries.

The Pakistani historian Nadiem classifies Makli’s monuments into three distinct groups: Groups I, II, and III. The northernmost, and oldest, of the graves are dubbed Group Three while the southernmost graves are Group One at the extreme southern end of the Makli ridge and Group Two In between.

The tombs belong mainly to the Arghun and Tarkhan period with some from the Samma era. 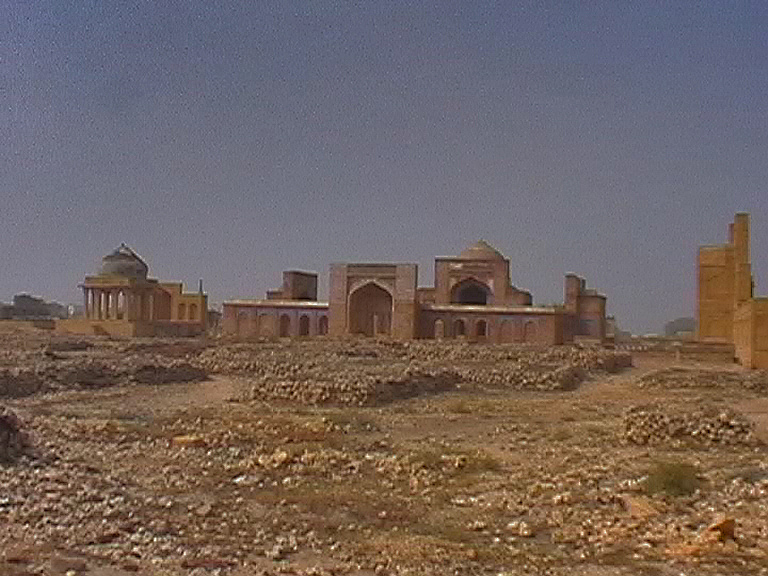 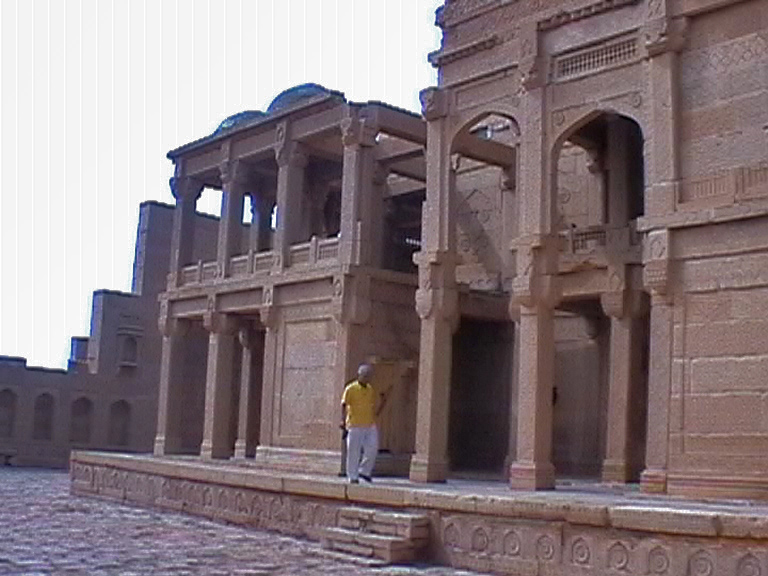 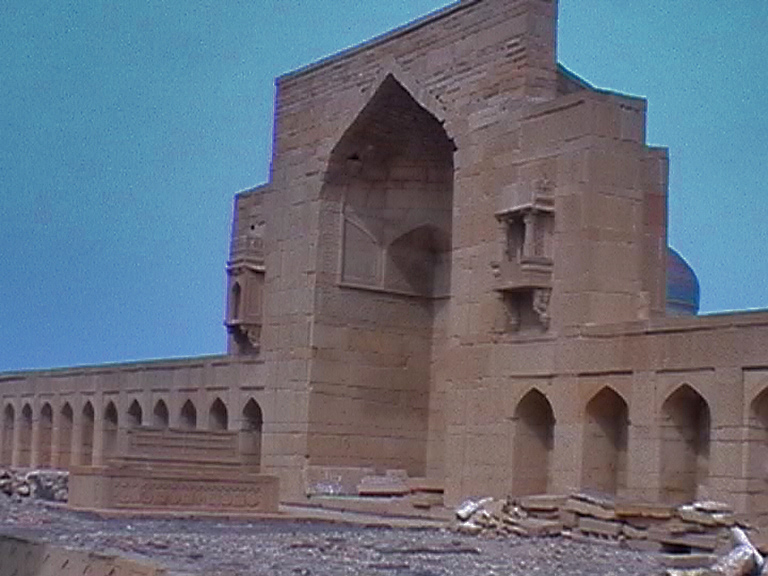 When we were stopped by the Police

We were on our way to Hinglaj, an important Hindu pilgrimage place in Balochistan in air conditioned vans. It is about 276 km from Karachi and our first stop was the border town Lasbela of Balochisthan. I was pretty excited to be in the ’Balochisthan’ of the famed Khan Abdul Gaffar Khan.

We soon reached the Karachi Quetta highway passing through the arid desert. Alas, the police stopped us from going ahead since there was a flood. I was quite heartbroken but a sand storm in that desert area provided some photo opportunities. 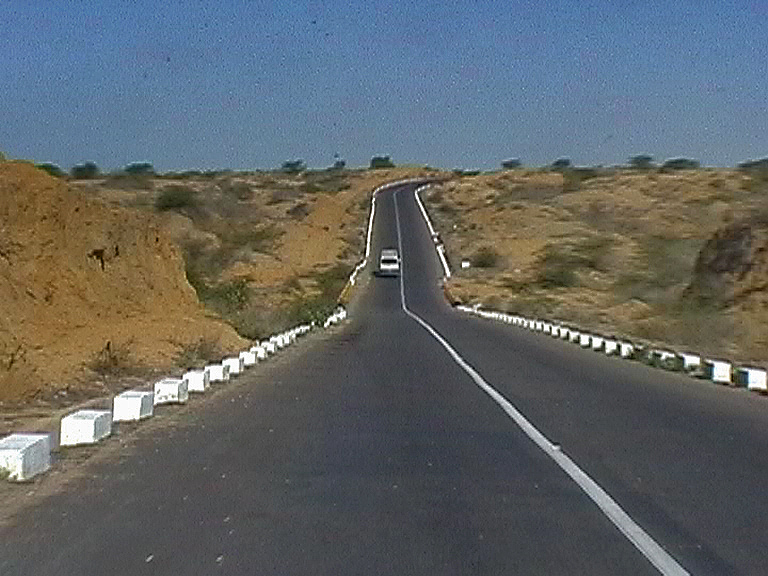 On the way to Mohenjo-daro

The journey from Karachi to Larkana is quite long about 420 km. The landscape becomes parched and bleak as you step away from Karachi. I realized the utility of the humble donkey in daily transport – humans and goods. Lack of development was quite evident from the surroundings. 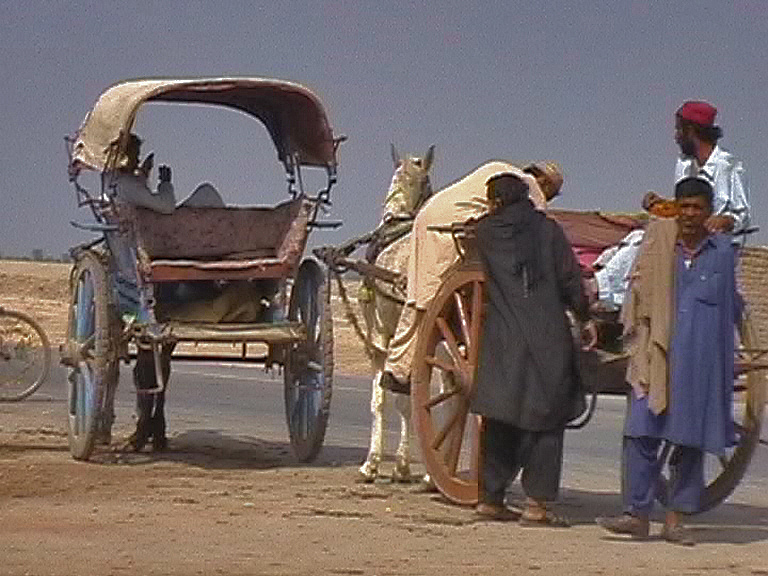 We stopped at the Shrine of Lal Shabaz Qalandar also known as Mast Kalandar. The shrine attracts followers from all faiths and is one of the most venerated in Pakistan. The outside of the dome is gilded with tiles from UAE, while the inner dome is decorated with tiles from Iran.

Lal Shabaz inspired the composition of the famous qawwali song Dama Dam Mast Qalandar . The shrine attracts a lot of wandering minstrels and gypsies who sing devotional songs while begging for alms.

We spent the night in Larkana and started early for a visit to Mohenjo daro the next morning. Each group was assigned a guide.

The ruins of Mohenjo daro are about 28 km away. Today was also my birthday making the day even more special. I kept on receiving birthday wishes from my friends. 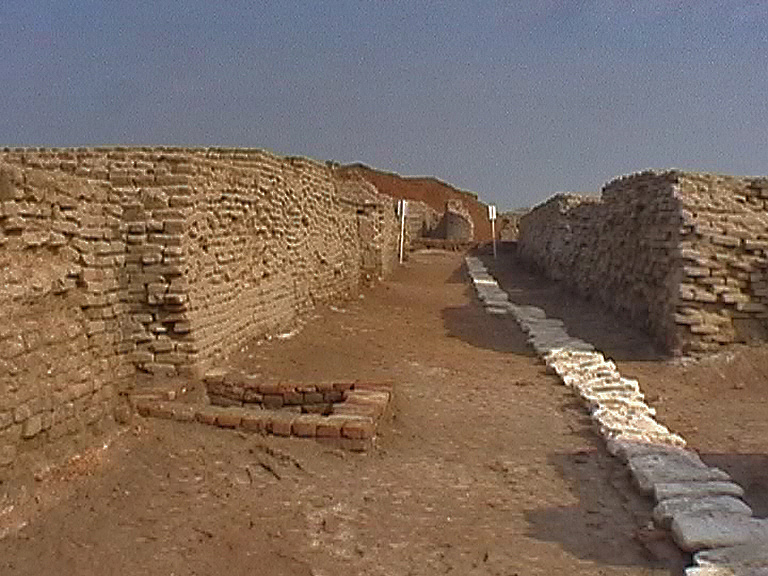 Mohenjo-daro has a planned layout with rectilinear buildings on a grid plan. There were no ruins of grandiose palaces, temples, or monuments. The plan showed that the people of Mohenjo-daro preferred decorum, minimalism, and hygiene rather than being ostentatious. A high level of social organization existed. The prosperity is evident from the recovered artefacts as well as the baked-brick structures. 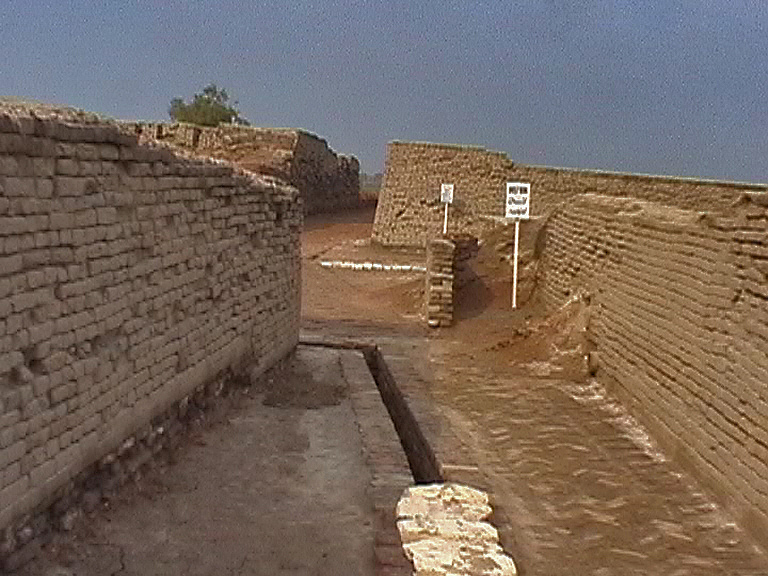 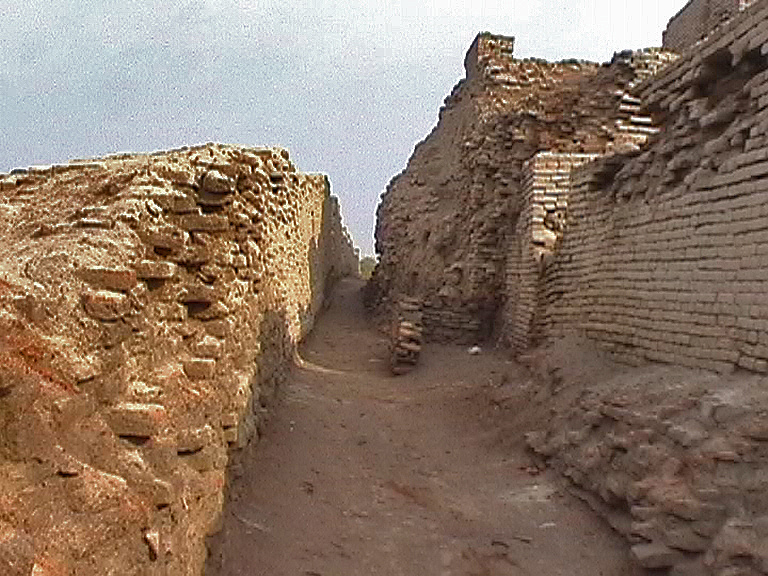 Citadel is higher than the rest of the city. This portion had the public baths, large residential blocks and Assembly Hall along with a central market place and a large community well. Public Sanitation and hygiene were of utmost importance. This was visible from the layout of their water distribution and sewerage systems. The drains were covered and lined the major streets. 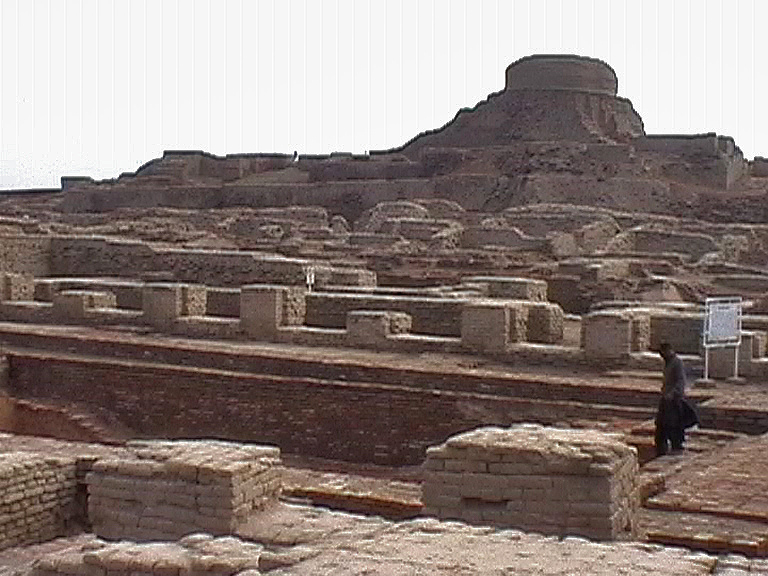 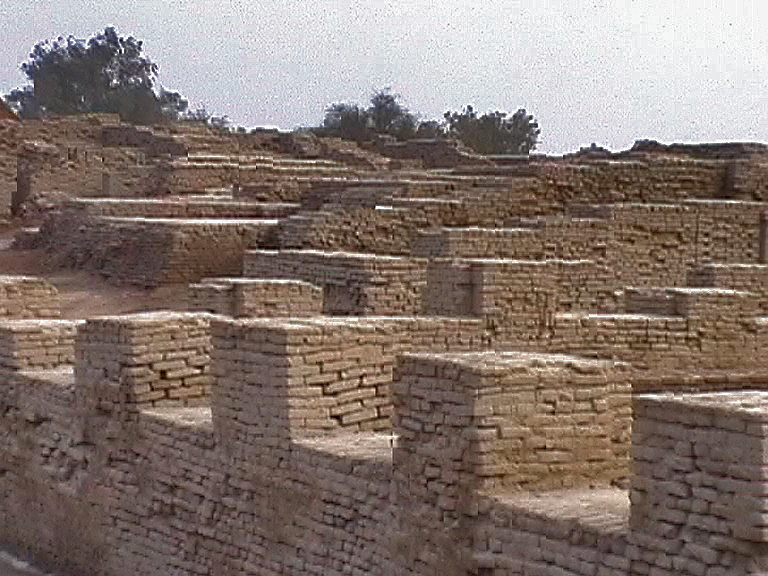 The Great Granary is one large building with partitions which could have been grain storage-bays. This is was first identified by Sir Mortimer Wheeler. Sir Wheeler also suggested the presence of conduits to keep the grains dry. 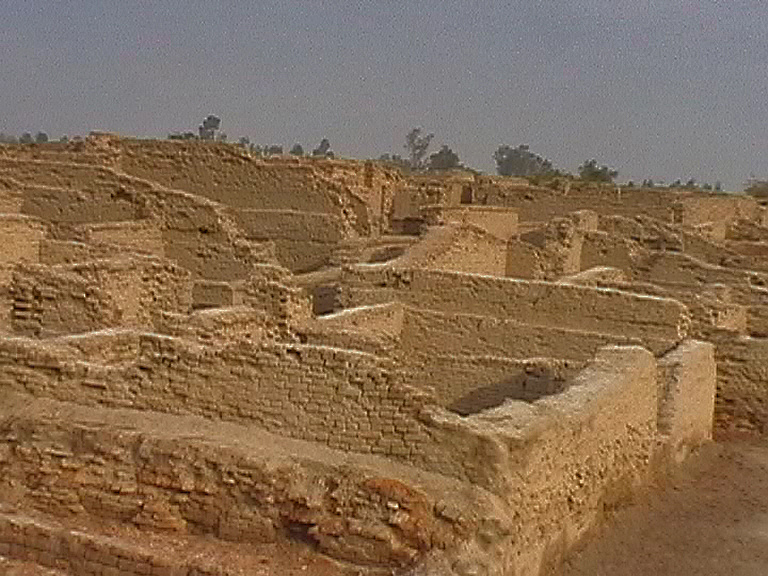 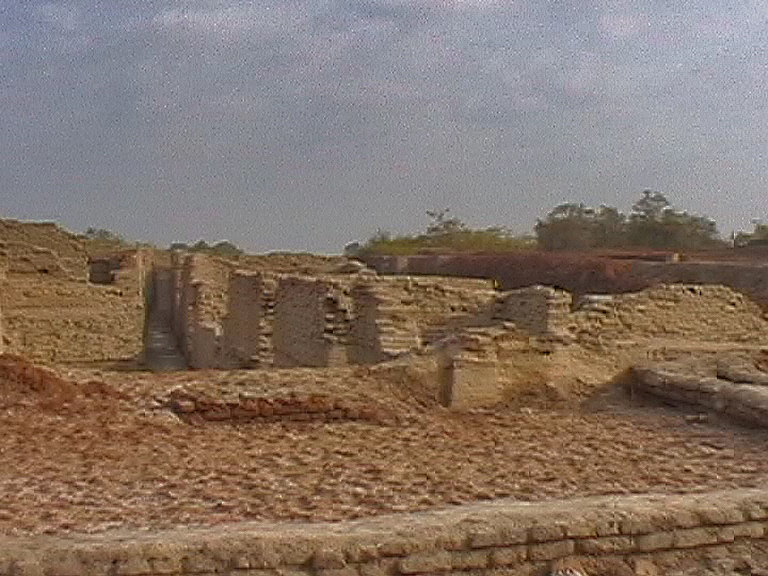 The next large structure we saw was the famous ‘Great Bath’. This picture in my Class VI history book had inspired me. I was overwhelmed to be able to stand here on my birthday.

Crossing the pillared patio, I went down the steps to bath. There are two sets of stairs – one north & one south. It is akin to a modern day swimming pool – constructed with bricks, plastered with gypsum and coated with natural tar all to prevent seepage.

The structure measured approximately 12 meters north-south and 7 meters wide, with a maximum depth of 2.4 meters. 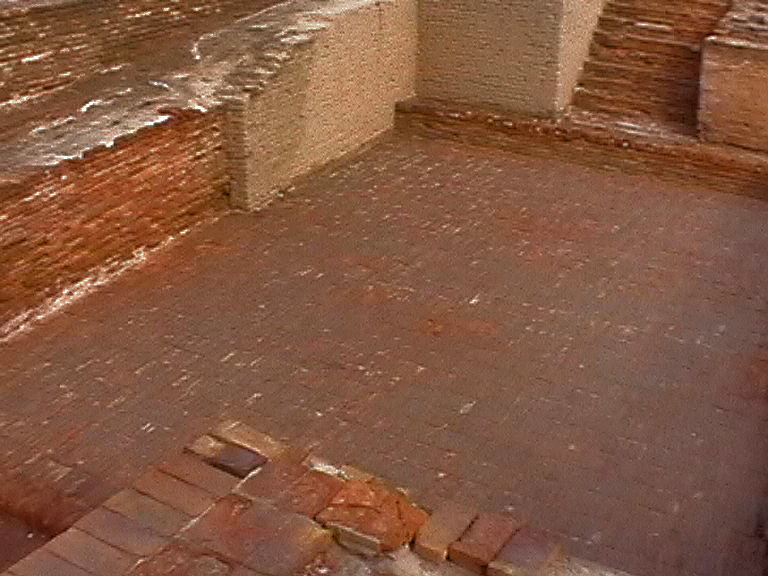 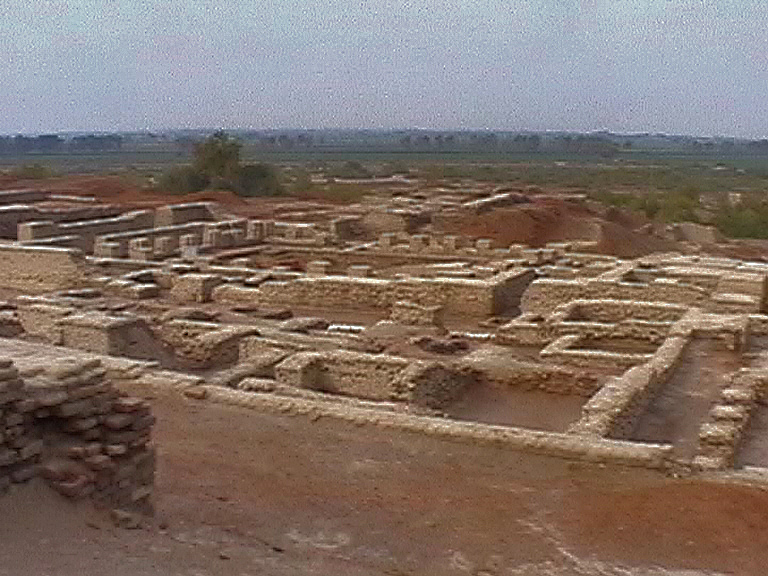 Rain water filled the Great Bath. The evidence of filling the baths were not found, but waste water drainage systems were found in Mohenjo daro. An outlet in a corner of the bath led to a high drain that emptied on the west side.

It is widely believed that this bath was used for religious purposes only, probably as a ritualistic bath during festivals.

The people of Mohenjo daro built private wells over generations for the need of large households or neighborhood. Today the wells look like towers after excavation. 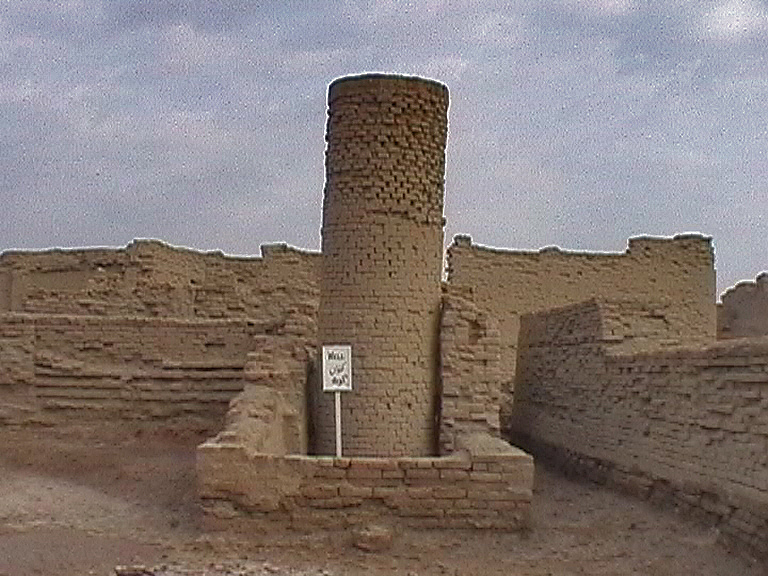 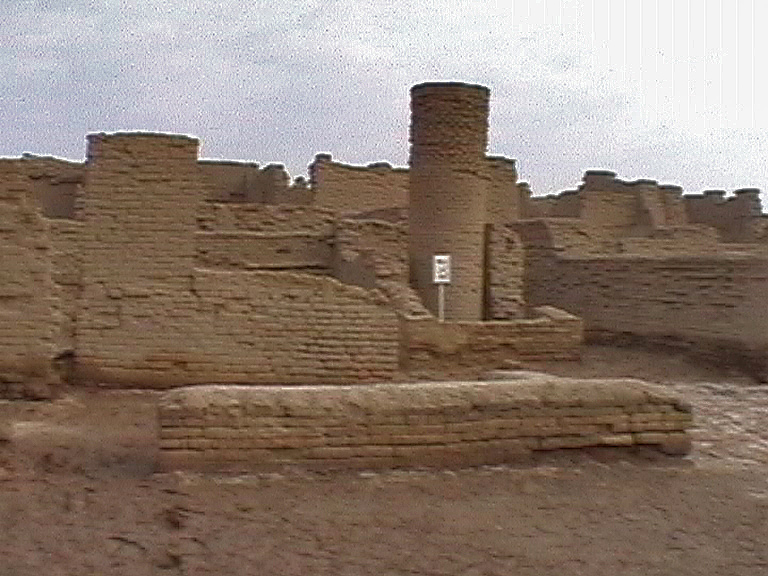 I visited the site museum and saw many artefacts like pottery and tools of copper and stone. I was quite disheartened to learnt that the iconic statues of the Dancing Girl and the Priest King are kept now in the National Museum,Delhi & in Karachi respectively.

At the time I visited, the archaeological excavation of Mohenjo-daro was suffering from paucity of funds. Today, the pace of excavations have increased with funding from UNESCO and larger tourist traffic.

Mohenjo-daro was perhaps an administrative center. There was no obvious central monarchy and maybe governed as a city-state by elected officials. Archaeologists have unearthed the seals and weights signifying regulated trade and commerce.

The reason for Mohenjo daro being abandoned in 1900 BC is yet to be discovered. Maybe the rivers changed course or dried up or the monsoon changed course or humans overused the water and natural resource. It is said that history repeats itself. We must learn from the mistakes of our fore fathers that resulted in the abandonment of a thriving civilization.

informative blog for everyone. especially for the reader.

Thank you for reading.

What a wonderful, richly detailed and inspiring blog! I live in NYC and was hoping to visit Mohenjo-daro sometime in December or January ’21. Your outstanding report has only strengthened my resolve! The only obstacle that remains is this pesky virus. Hopefully it will be just a (very) unpleasant memory by 2021.
Thank you, Dr. Kumar!

Thank you Dan. Wishing you a very happy journey after the pesky virus is gone.

Sir, was checking whether or not it is possible to visit Mohenjo daro. Read your experience and exploration. It’s so inspiring! I wish, i would be able to fulfill my dream of visiting