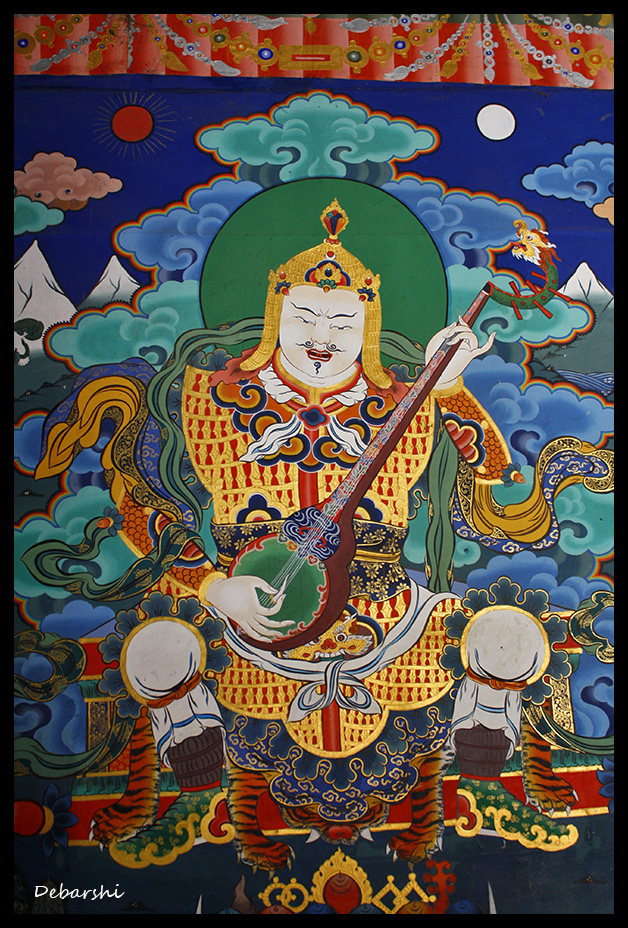 Living close to this majestic kingdom, we have the opportunity to drive across this country. In this post we are sharing our experience of driving through Bhutan and visiting Paro and Thimphu area. We will cover the rest of the country in later posts.

What you can see in Bhutan

You can get to see the age-old practices of Tibetan Buddhism in the ‘Lakhang’; winding yet picturesque mountain roads dotted with ‘Chorten’ (always cross on the left) , high mountain passes with prayer flags against the often snowcapped blue mountains and the stunning ‘Dzong’(Monastic Forts). 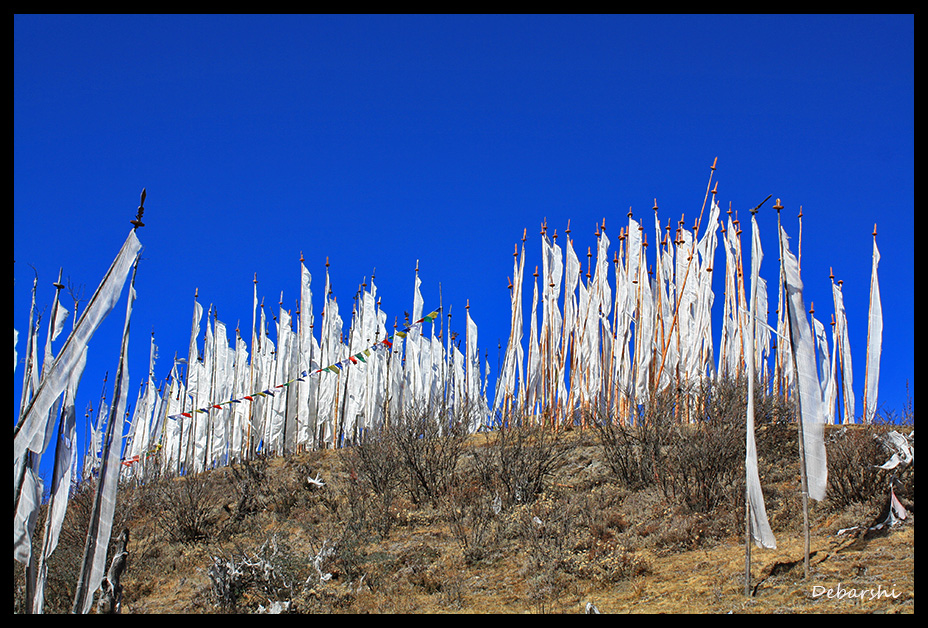 Our route to reach Bhutan

We drove from Kolkata to Chalsa in North Bengal. Phuentsholing is the gateway to enter Bhutan from West Bengal Jaigaon check post. You can read about the Travel and Vehicle permits for Indians in another post.

We drove to Paro from Phuentsholing. The journey started out well with scenic winding mountain roads and Debarshi was covering 40-45 kms in the first hour. Seldom does this happen to me. I had a severe bout of motion sickness and stopped to rest a while. Dr Majumder (being the kind soul that he is) gave me a medicine. We did spot some Rhesus Monkeys, Grey Langurs, Birds and also a Pika. Crossing Chukha and Chapcha, we reached Chuzon. The road forks between Thimphu and Paro. 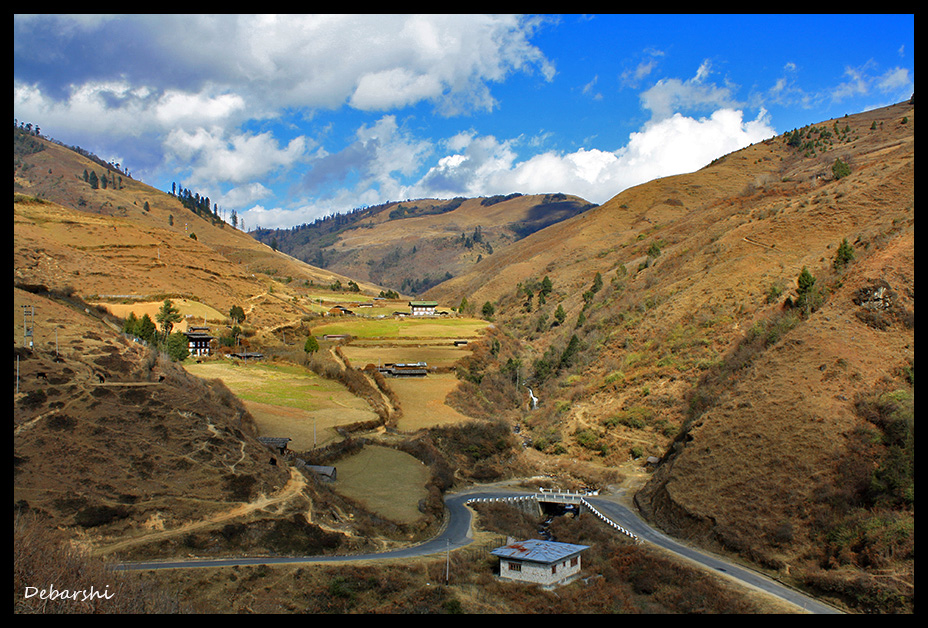 The road to Paro crosses a bridge and goes to the left. The roads in the Paro valley are impeccable; no potholes and well maintained surface. The shops close early so it was all quiet when we entered the city at 5 pm ; thus finding our hotel was an uphill task.

We stayed at the Kichu Resort Paro, it is just outside the city towards the North. The resort is amazing. The river Paro Chu meanders by it . The resort covers an landscaped open vista dotted with cottages. 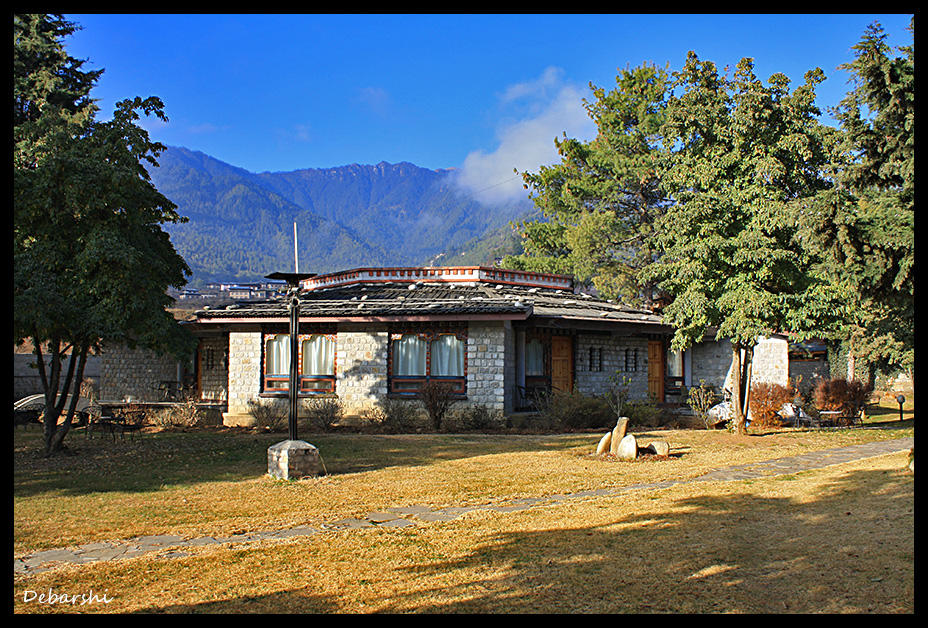 The spa is fabulous, a must visit after a long arduous drive. The food must be pre-ordered since they only cook ala carte in just the ordered amounts. But the chef is good and churns out delicious food. Both the breakfast and dinner were delightful affairs. 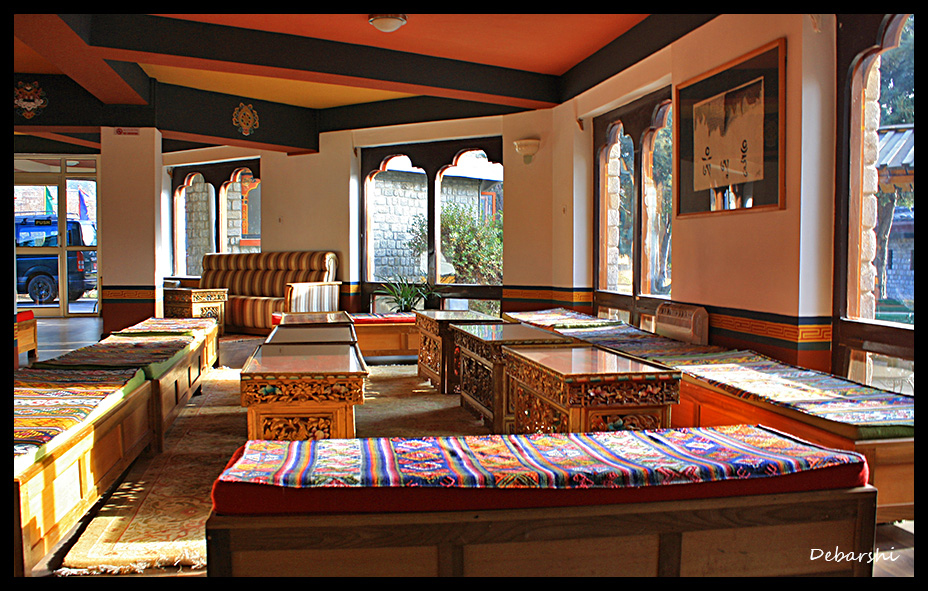 The hotel had also organised a bonfire on the river banks along with a cultural show. This was a real treat as the temperature had fallen to about 2 – 3 degrees. 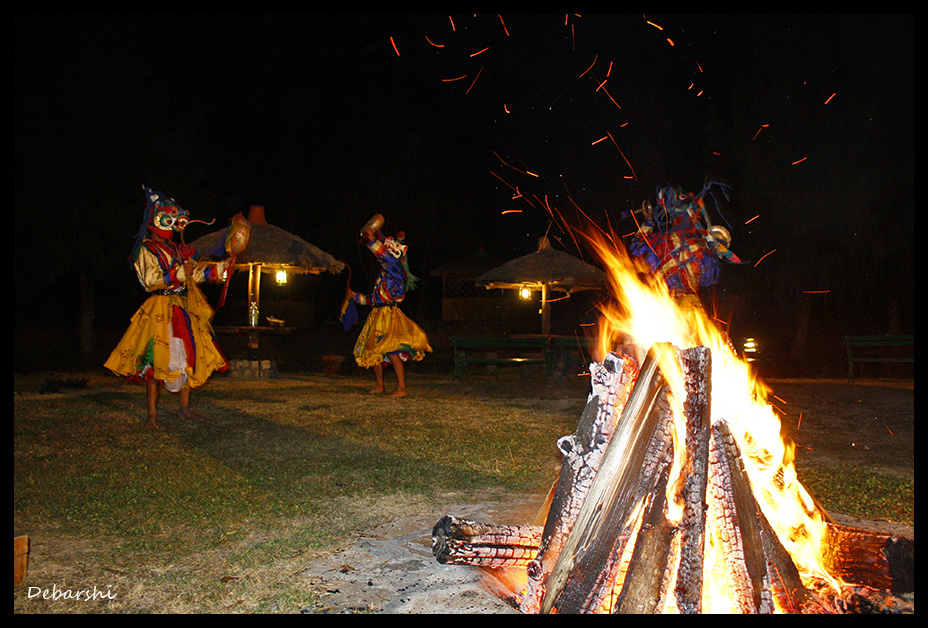 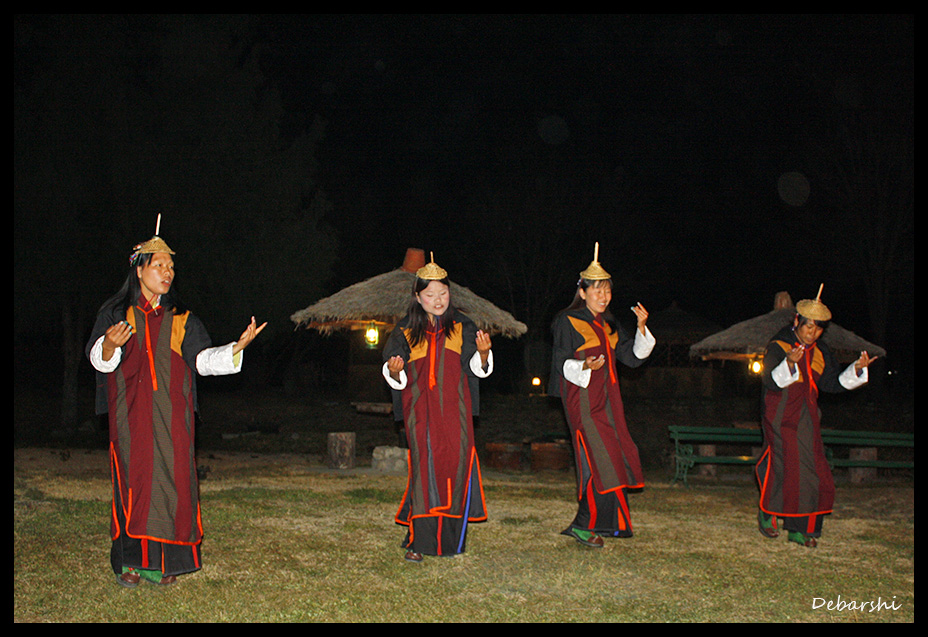 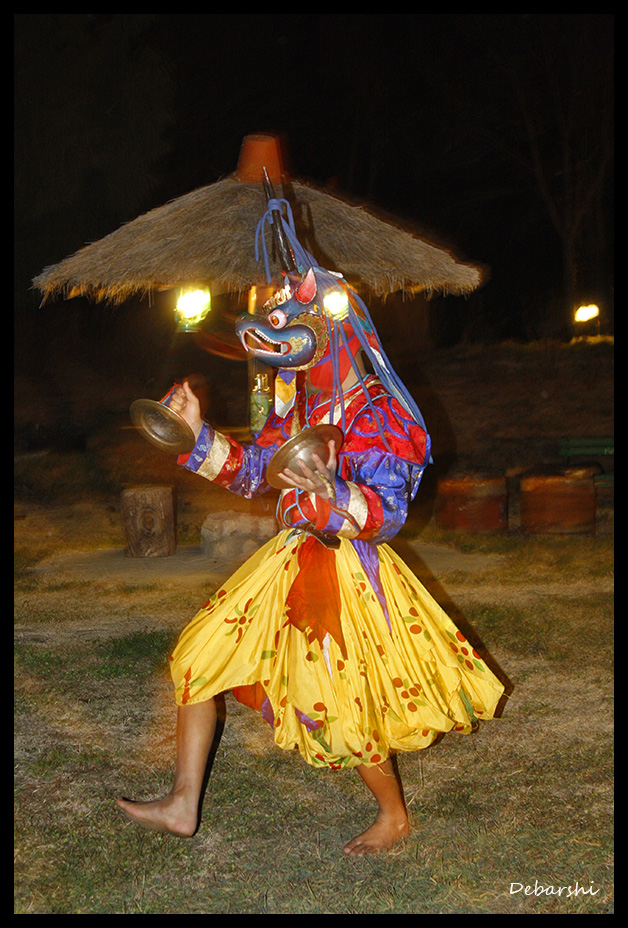 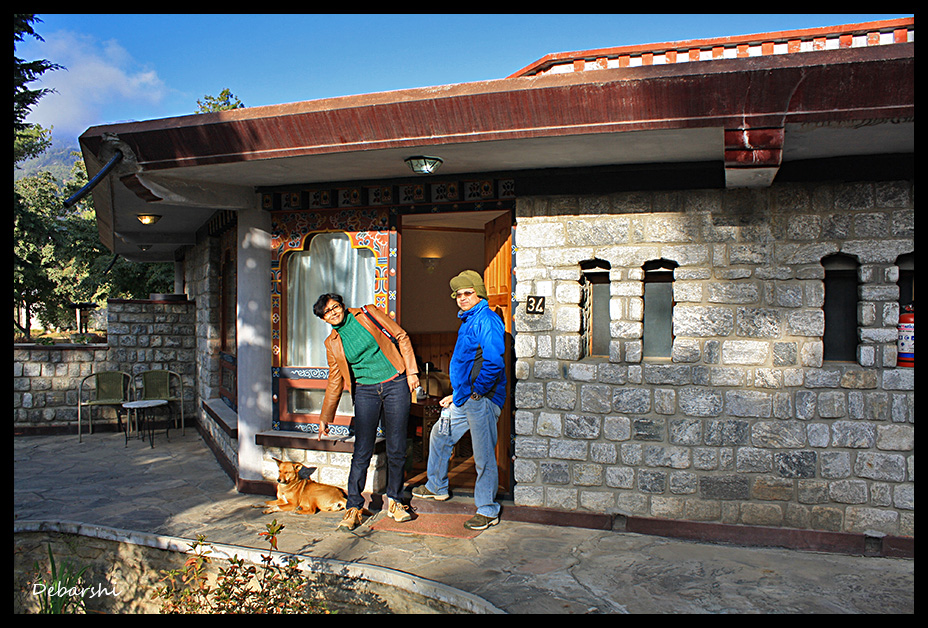 Paro Dzong is also known as Rinpung Dzong, meaning the fortress of the heap of jewels. It was built in 1644, and almost burnt almost to the ground in 1906. 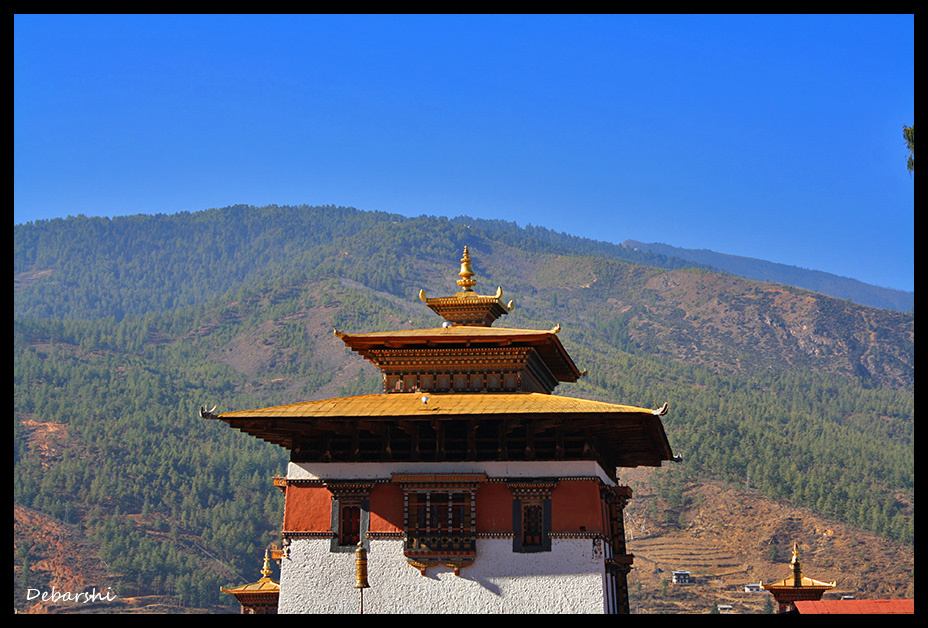 The Dzong is perched above the town. We drove a long winding route, then crossed the river to reach the Dzong. This can be easily covered in 5 minutes on foot. This being a weekend the offices inside the Dzong were closed but open to tourists. 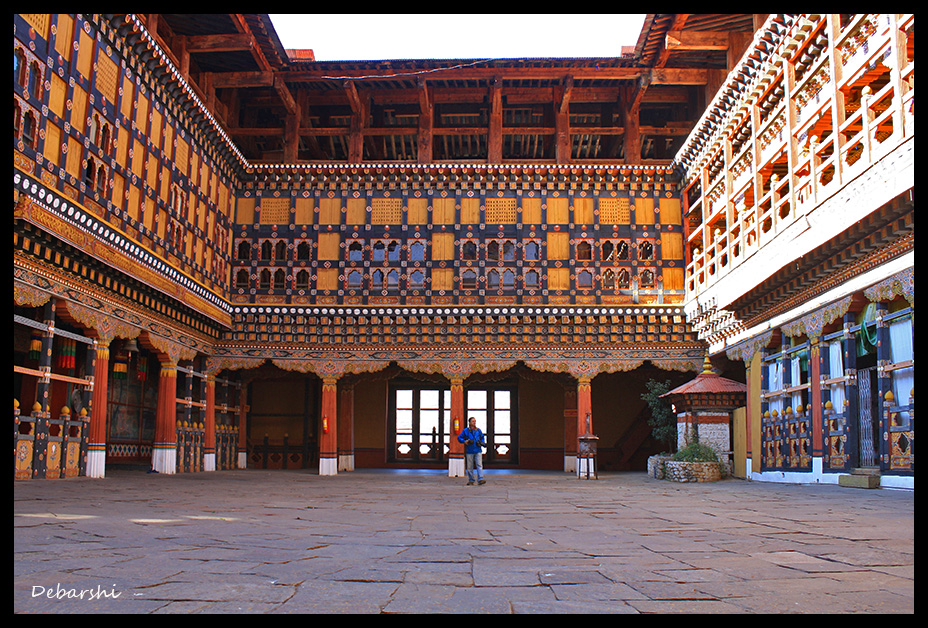 This Dzong is famous for the annual religious festival – Paro Tshechu .The Guru Thongdrel is a 20 x 20 metre-wide Thangka or embroidered painting and is displayed in this festival. A view of the Thongdrel is said to cleanse the viewer of all sins. 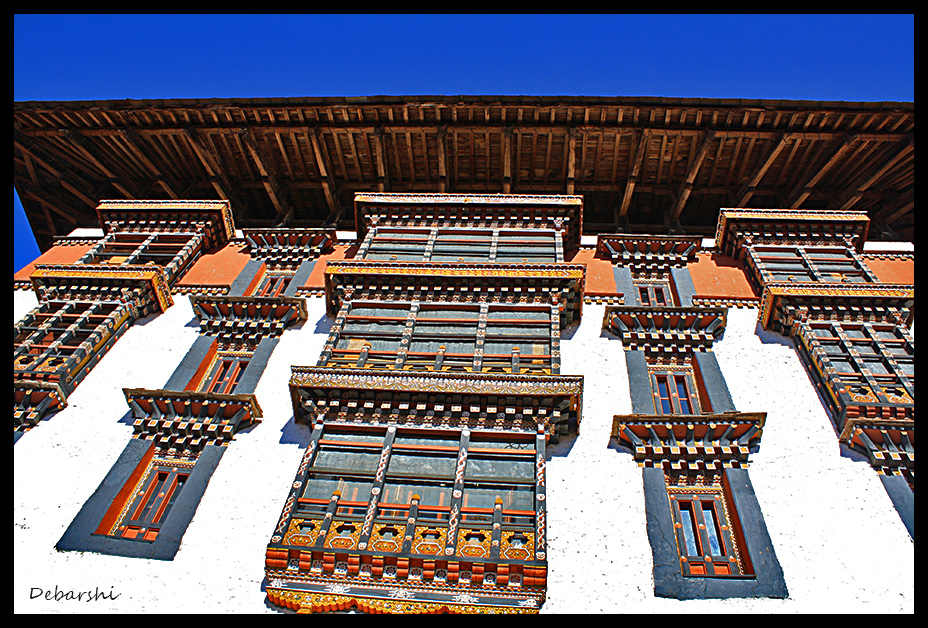 There are several shrines and chapels inside the Dzong: 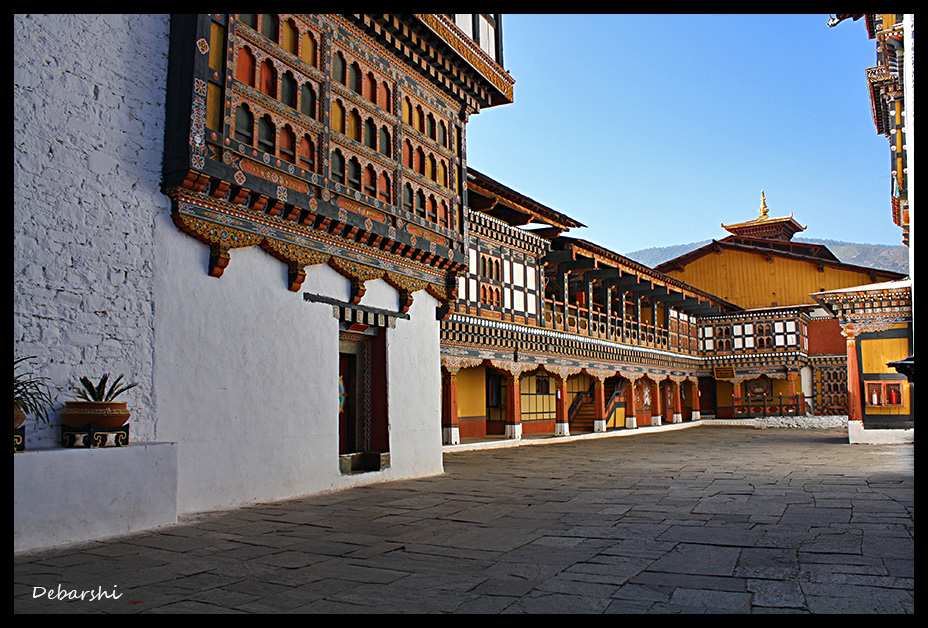 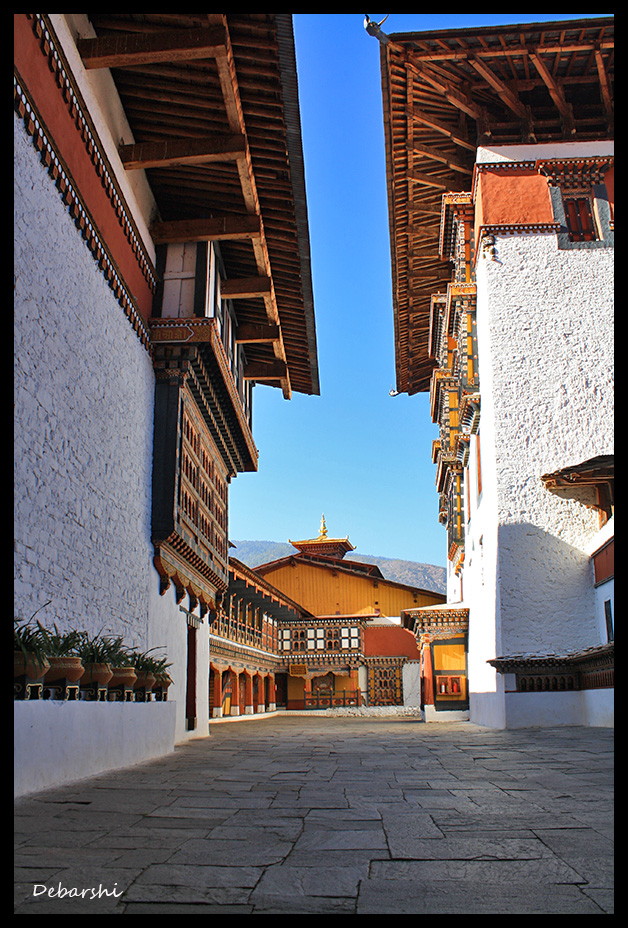 Inside the Paro Dzong 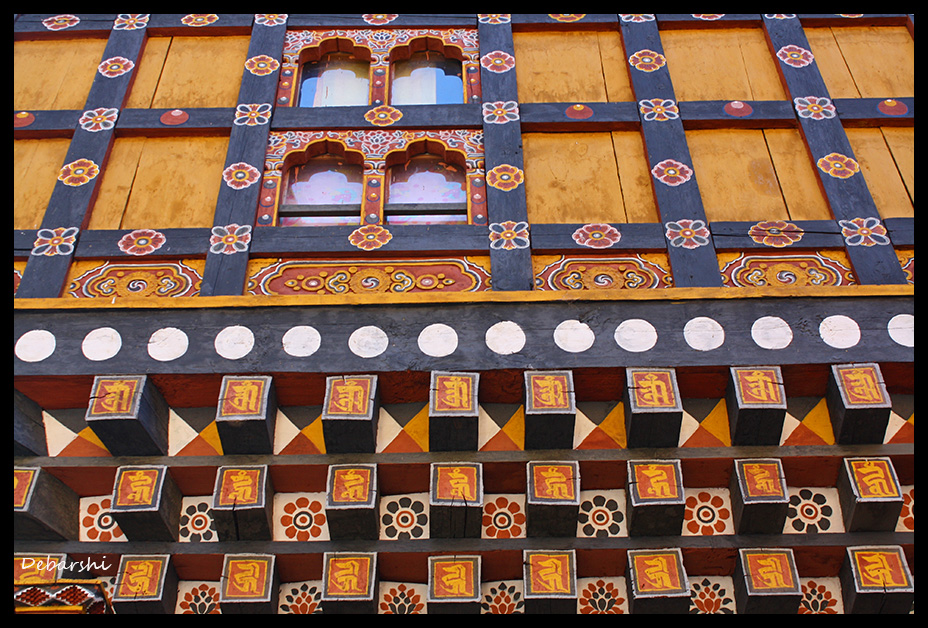 A colorful wooden Panel in the Paro Dzong

You can also see the Deyangkha Temple outside the Paro Dzong and a covered cantilever bridge beneath the Dzong.

The sprawling Paro valley offers a unique photo opportunity from the Dzong . 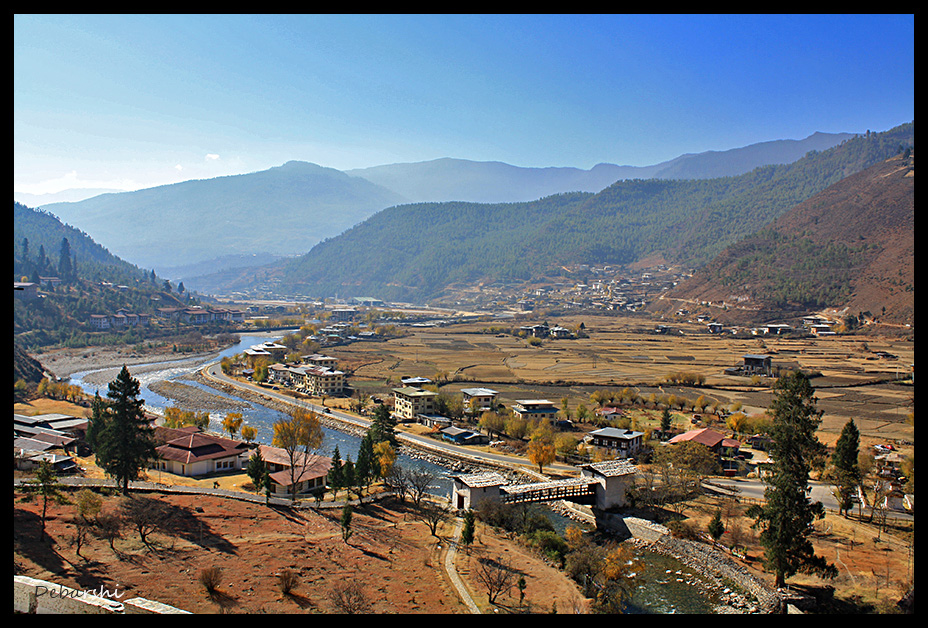 Paro Bridge near the Dzong

Although we could not visit the Museum due to paucity of time, but I strongly recommend the National Museum of Bhutan housed in a Ta Dzong (7 storied watchtower fortress). 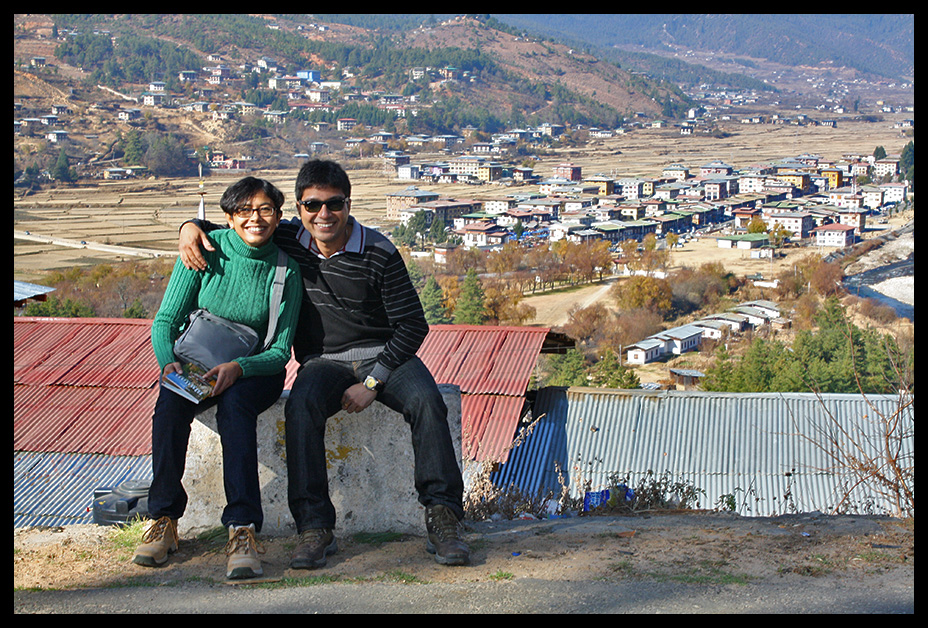 Just outside the Paro Dzong

It is possible to walk from one end of Paro town to another within 10 minutes – how cute is that?

Himalayan cliffs surround the Paro International Airport on all sides .Thus all flights have to ascend steeply once they take off. We also noticed a queer thing. There are roads on both side of the airport, we had used the narrow road on the East side of the runway the previous evening. Today, a sign hung at the road – Road Closed temporarily – Flight landing!

Chele La is the highest motorable pass in Bhutan at an altitude of 3988 meters providing access to the Haa valley. Bondey comes right after Paro, crossed the bridge on Paro Chu to the right and then started our ascent to the Chele La pass, a distance of about 34 kms on a well maintained mountain road .The mountain roads in Bhutan are maintained by the Border Roads Organization of the Indian Army under Project Dantak. The road was covered with snow in many parts and offers many bird watching prospects. 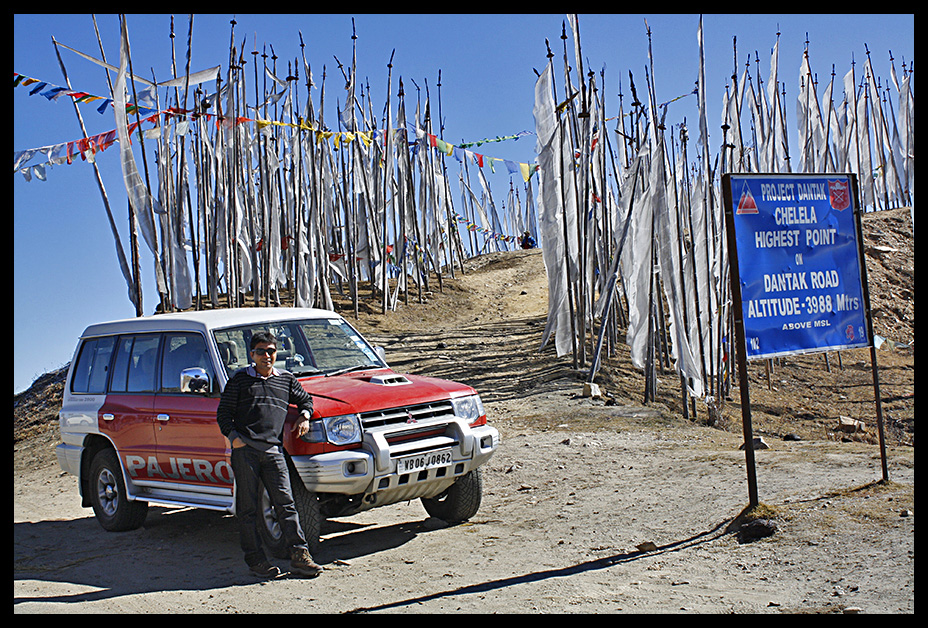 This top of the pass offers a great view of the snow covered Mount Jhomalhari and Haa Valley across the pass. 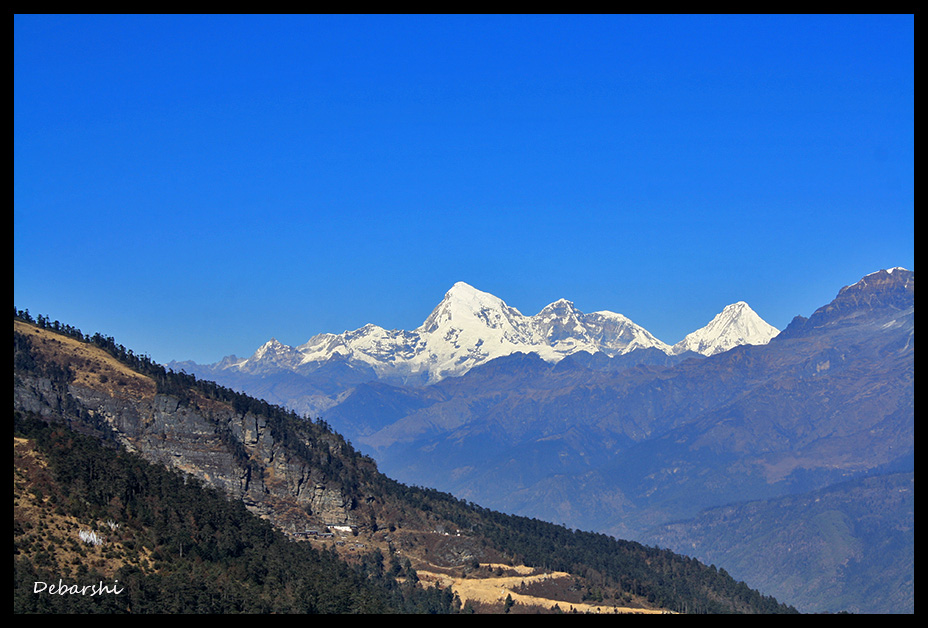 The Chele La is a fantastic Bird Watching prospect for the Blood Pheasant, Kalij Pheasant and Himalayan Monal. We spotted and clicked the abundantly chirping Spotted Nutcrackers. Then as we were negotiating a hairpin bend, a group of six Kalij Pheasants decided to cross the road and offered us a splendid view. 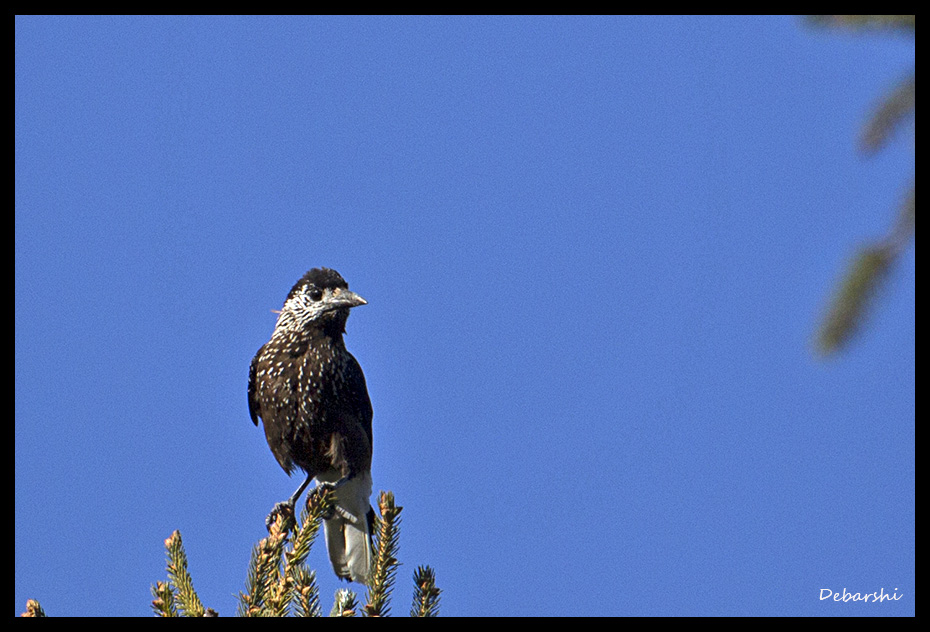 Paro to Thimphu is roughly 51 kms . An impeccable well maintained two lane expressway connects this Himalayan mountainous stretch. Debarshi covered in about 55 minutes. We had also read that there is a Weekend Handicrafts Market in Thimphu which closes at 4 pm, hence the speeding. 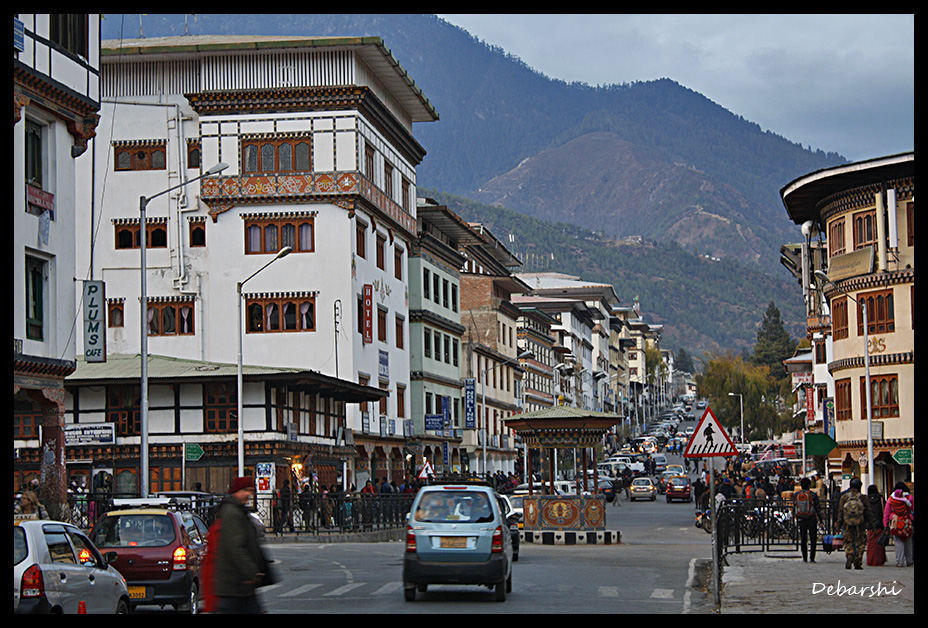 Thimphu is a superb clean spic and span city, the capital of Bhutan with very few High rises and NO Traffic Signals. Motorists are law abiding and use the designated Parking areas . There are no jay walking pedestrians. There was a youth festival complete with music and Graffiti in the Town Square. 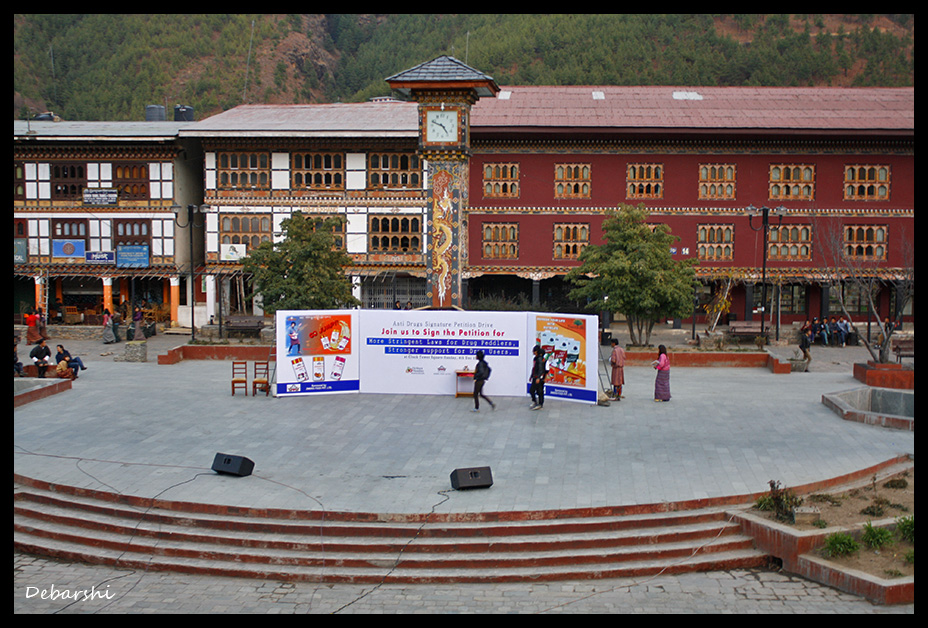 The funny part is that the sought after weekend handicraft market is now neither only a weekend market , but open on all days nor does it does it close at 4 pm ! 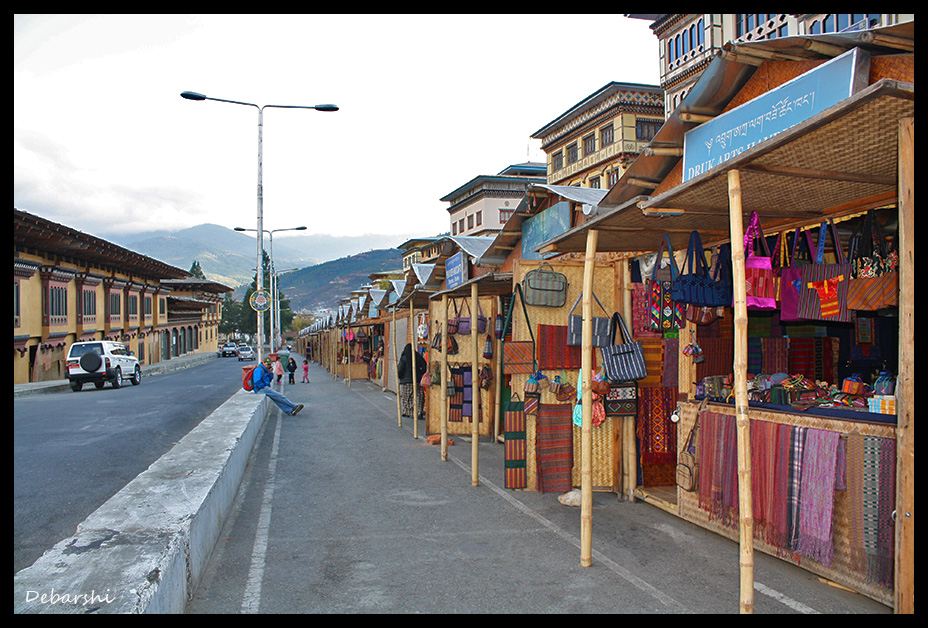 We stayed at the Peaceful Resort situated just outside Thimphu City Limits in the Upper Motithang Area. A kind soul (reminiscent of a similar experience in Phnom Penh) guided us to the resort. He took the efforts of driving all the way to the resort even though his home was in the opposite direction. 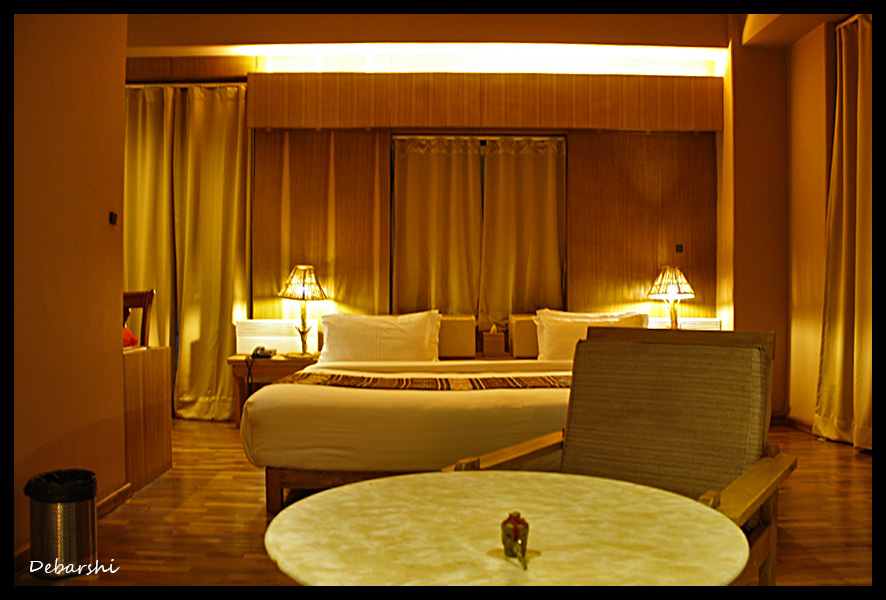 The view of the sunrise from the rooms are captivating and you can spot good avian life in the early mornings. The name is quite apt. 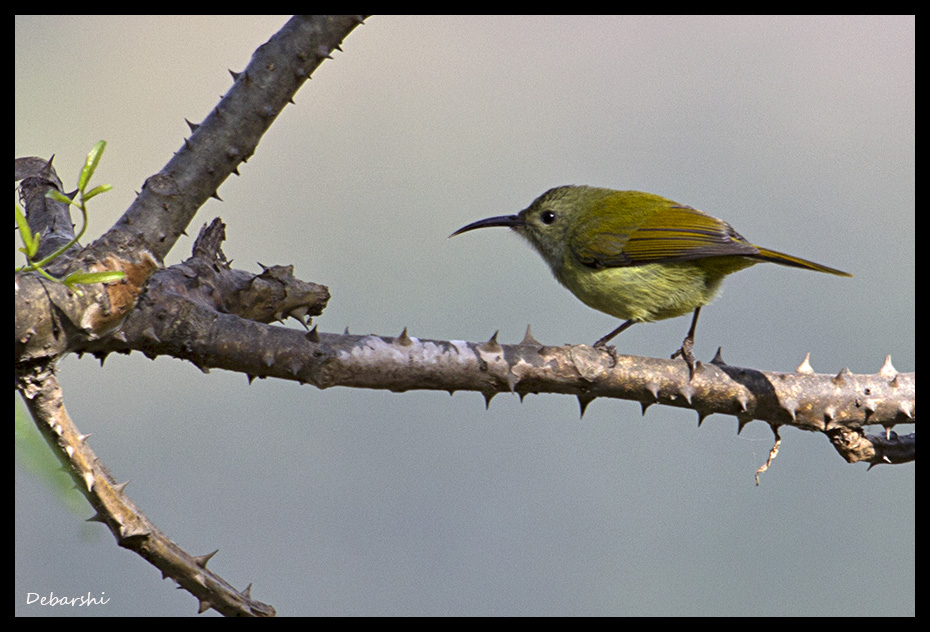 Our next destinations were Punakha and the Bumthang Valley which I will write about in my next post.

Experience of Driving in Bhutan